An extremely rare copy of the very first book written by Humphry Davy, one of the world's greatest scientists, at just 19 years of age, has been discovered in UCL's library collections. 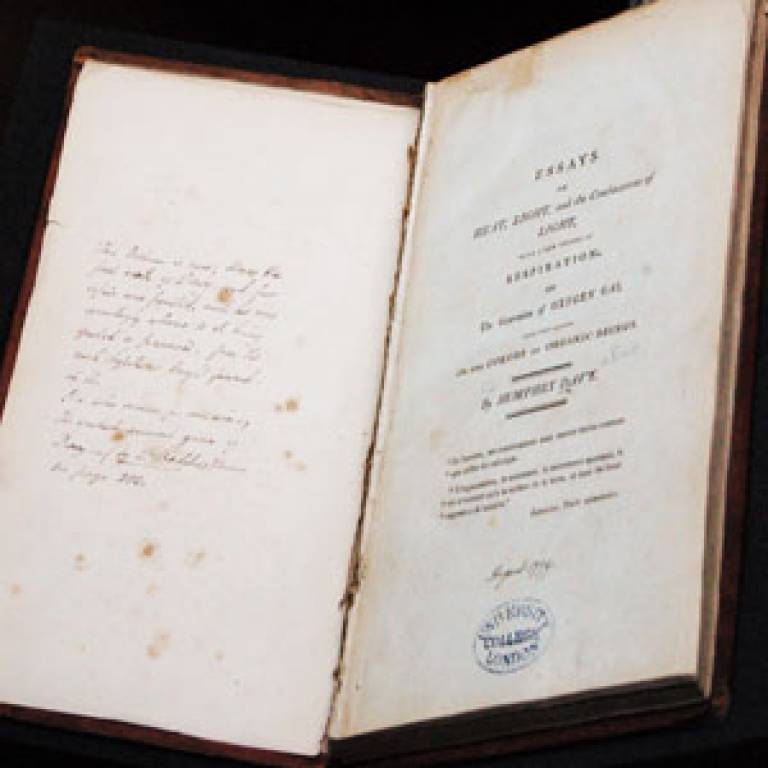 Essays on heat, light and the combinations of light was published in 1799, a youthful work that Davy was later in life embarrassed about having written.

The found copy was presented to UCL in 1890 by Professor George Carey Foster, then Professor of Physics at UCL, but only came to light recently during cataloguing in UCL's Special Collections. A note on the flyleaf written by Foster says: "This volume is rare; it was the first work of Davy, and four copies were printed, and he was exceedingly adverse to its being quoted or preserved, from the rash hypotheses brought forward in it."

The discovered book was written two years after Davy had first read Antoine Lavoisier's Elementary Treatise on Chemistry, in which Lavoisier had presented a unified theory of chemistry, and contains Davy's own views on Lavoisier's theories.

"Reading Lavoisier was really a road to Damascus moment for Davy," says Dr Andrea Sella, UCL Chemistry. "He was thrilled by it but at the same time all kinds of things in it didn't make sense to him, and this inspired him to start doing experiments.

"This book also sees the start of Davy writing a series of memoirs, in which he both agrees with and criticises Lavoisier, and starts to set out his own ideas. Later on he came to regret this, and worried about the youthful and sometimes rash statements they included, but they give an insight into what a clever man and also what an enthusiast he was."

Commenting on the discovered essays in the Collected Works of Humphry Davy, his brother John, who edited the works, commented: "His first published essays on Heat and Light are very characteristic, as the bold attempts of an original and enterprising mind, and bearing the stamp, at the same time, of youth and of genius, - in the faults belonging to the one, and the redeeming qualities of the other ..."

Davy later became famous as the inventor of the Davy Lamp, credited with saving the lives of thousands of miners, and he went on to become President of the Royal Society and was made a Baronet in 1819. He also discovered the elements potassium, sodium, calcium, magnesium, boron, and barium as well as confirming that both chlorine and iodine were elements.

"This is a great find," said Dr Sella. "Davy was a brilliant scientist and intuitive experimentalist, and was also a fantastic speaker, who drew huge crowds to hear him lecture."

Bill Lehm in UCL Special Collections, found the work in the process of cataloguing the History of Science Sources Collection. He says: "I immediately thought that this book might have some significance because it was very early for Davy - most of his works that I was aware of dated from later in the 19th century, and this one was from 1799. It turned out to be his first published work, and something he became very ashamed of later in life, and wanted to suppress. The inscription inside the book by Foster stated only four copied were ever published, and I realised that I was holding the fourth and missing copy."