Scientists have moved a step closer to creating a computer model of the brain after developing a technique to map the connections and functions of nerve cells in the brain together for the first time. 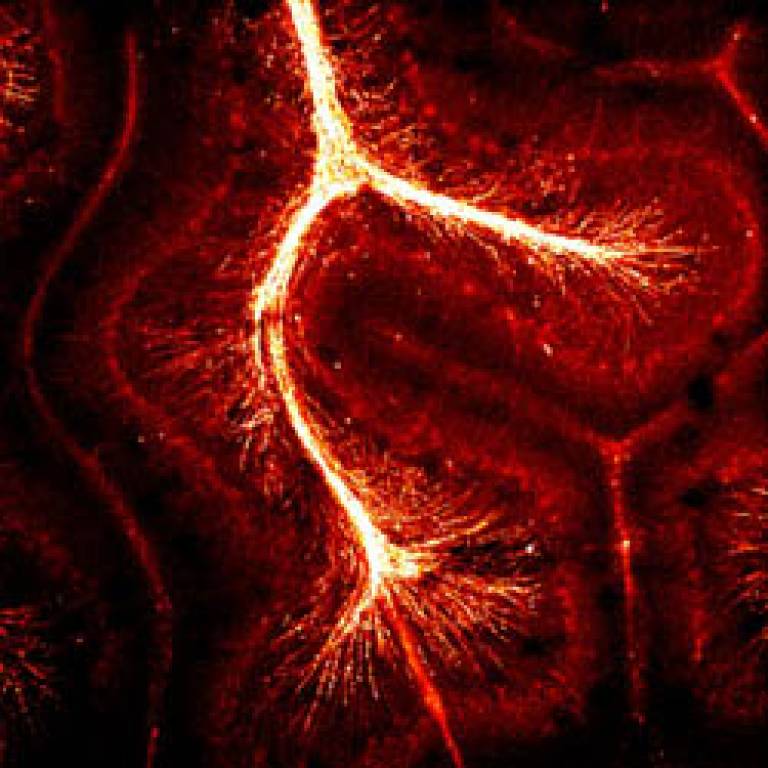 A new area of research is emerging in the neuroscience known as 'connectomics'. With parallels to genomics, which maps the our genetic make-up, connectomics aims to map the brain's connections (known as 'synapses'). By mapping these connections - and hence how information flows through the circuits of the brain - scientists hope to understand how perceptions, sensations and thoughts are generated in the brain and how these functions go wrong in diseases such as Alzheimer's disease, schizophrenia and stroke.

Mapping the brain's connections is no trivial task, however: there are estimated to be one hundred billion nerve cells ('neurons') in the brain, each connected to thousands of other nerve cells - making an estimated 150 trillion synapses. Dr Tom Mrsic-Flogel, a Wellcome Trust Research Career Development Fellow at UCL (University College London), has been leading a team of researchers trying to make sense of this complexity.

"How do we figure out how the brain's neural circuitry works?" he asks. "We first need to understand the function of each neuron and find out to which other brain cells it connects. If we can find a way of mapping the connections between nerve cells of certain functions, we will then be in a position to begin developing a computer model to explain how the complex dynamics of neural networks generate thoughts, sensations and movements."

Nerve cells in different areas of the brain perform different functions. Dr Mrsic-Flogel and colleagues focus on the visual cortex, which processes information from the eye. For example, some neurons in this part of the brain specialise in detecting the edges in images; some will activate upon detection of a horizontal edge, others by a vertical edge. Higher up in visual hierarchy, some neurons respond to more complex visual features such as faces: lesions to this area of the brain can prevent people from being able to recognise faces, even though they can recognise individual features such as eyes and the nose, as was famously described in the book The Man Who Mistook Wife for a Hat by Oliver Sachs.

In a study published online today in the journal Nature, the team at UCL describe a technique developed in mice which enables them to combine information about the function of neurons together with details of their synaptic connections.

The researchers looked into the visual cortex of the mouse brain, which contains thousands of neurons and millions of different connections. Using high resolution imaging, they were able to detect which of these neurons responded to a particular stimulus, for example a horizontal edge.

Taking a slice of the same tissue, the researchers then applied small currents to a subset of neurons in turn to see which other neurons responded - and hence which of these were synaptically connected. By repeating this technique many times, the researchers were able to trace the function and connectivity of hundreds of nerve cells in visual cortex.

The study has resolved the debate about whether local connections between neurons are random - in other words, whether nerve cells connect sporadically, independent of function - or whether they are ordered, for example constrained by the properties of the neuron in terms of how it responds to particular stimuli. The researchers showed that neurons which responded very similarly to visual stimuli, such as those which respond to edges of the same orientation, tend to connect to each other much more than those that prefer different orientations.

Using this technique, the researchers hope to begin generating a wiring diagram of a brain area with a particular behavioural function, such as the visual cortex. This knowledge is important for understanding the repertoire of computations carried out by neurons embedded in these highly complex circuits. The technique should also help reveal the functional circuit wiring of regions that underpin touch, hearing and movement.

"We are beginning to untangle the complexity of the brain," says Dr Mrsic-Flogel. "Once we understand the function and connectivity of nerve cells spanning different layers of the brain, we can begin to develop a computer simulation of how this remarkable organ works. But it will take many years of concerted efforts amongst scientists and massive computer processing power before it can be realised."

"The brain is an immensely complex organ and understanding its inner workings is one of science's ultimate goals," says Dr John Williams, Head of Neuroscience and Mental Health at the Wellcome Trust. "This important study presents neuroscientists with one of the key tools that will help them begin to navigate and survey the landscape of the brain."

Image: The gold colour shows information superhighways in the brain: the gold is a protein making up myelin, which speeds the conduction of electrical signals along nerve cells, allowing us to think more quickly. Courtesy of Professor David Attwell (UCL Neuroscience, Physiology & Pharmacology)

UCL is active in most aspects of neuroscience research to the highest standards. At the molecular level this encompasses studies on receptors, intracellular signalling, ion channels and transporters. At the cellular level, it covers most aspects of signalling within and between neurons, and also glia. At the systems level, it includes the function of neuronal networks and their relationships to higher-order cognitive processing. The Research Department of Neuroscience, Physiology and Pharmacology (NPP) brings together the majority of UCL's basic neuroscience community, with shared interests in the function of the nervous system.