Beams of electrons link Saturn with its moon Enceladus 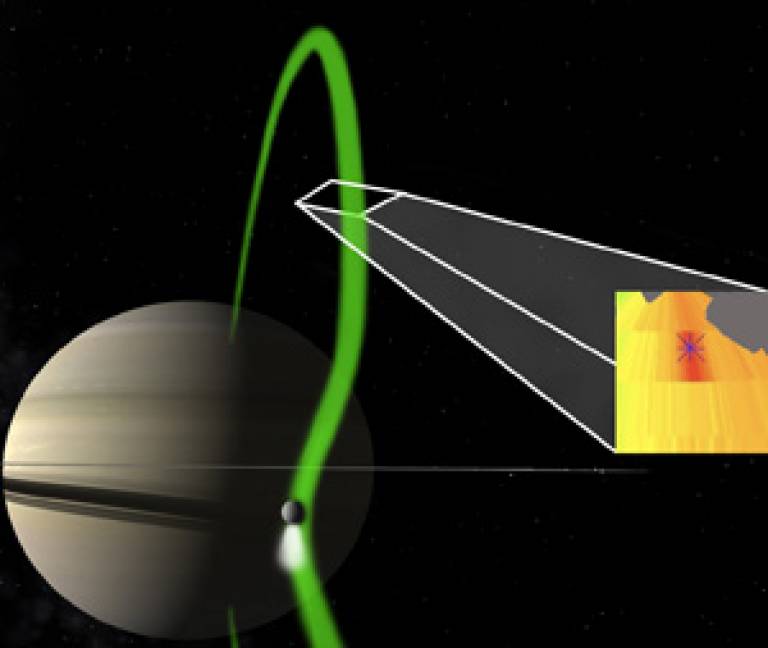 Data from NASA's Cassini spacecraft have revealed that Enceladus, one of Saturn's diminutive moons, is linked to Saturn by powerful electrical currents - beams of electrons that flow back and forth between the planet and moon.

The finding is part of a paper published in Nature today. CAPS, one of the instruments on board Cassini which made the electron beam discovery, includes a electron sensor called CAPS-ELS - led by UCL (University College London).

Since Cassini's arrival at Saturn in 2004 it has passed 500km-wide Enceladus 14 times, gradually discovering more of its secrets on each visit.  Research has found that jets of gas and icy grains emanate from the south pole of Enceladus, which become electrically charged and form an ionosphere. The motion of Enceladus and its ionosphere through the magnetic bubble that surrounds Saturn acts like a dynamo, setting up the newly-discovered current system.

Scientists already knew that the giant planet Jupiter is linked to three of its moons by charged current systems set up by the satellites orbiting inside its giant magnetic bubble, the magnetosphere, and that these current systems form glowing spots in the planet's upper atmosphere. The latest discovery at Enceladus shows that similar processes take place at the Saturnian system too.

The detection of the beams was made by the Cassini Plasma Spectrometer's electron spectrometer, CAPS-ELS, the design and building of which was led at UCL's Mullard Space Science Laboratory. UCL co-authors of the Nature paper, Dr Geraint Jones and Professor Andrew Coates, are delighted with this new finding.

Dr Jones said: "Onboard Cassini, only CAPS-ELS has the capability of directly detecting the electron beams at the energies they're seen; this finding marks a great leap forward in our understanding of what exactly is going on at mysterious Enceladus."

Lead co-investigator of CAPS-ELS, Professor Coates, added: "This now looks like a universal process - Jupiter's moon Io is the most volcanic object in the solar system, and produces a bright spot in Jupiter's aurora. Now, we see the same thing at Saturn - the variable and majestic water-rich Enceladus plumes, probably driven by cryovolcanism, cause electron beams which create a significant spot in Saturn's aurora too."

The Nature paper in which the discovery is reported is co-led by Dr Wayne Pryor of Central Arizona College and Dr Abigail Rymer of the Johns Hopkins University Applied Physics Laboratory. The work also reports the presence of an ultraviolet auroral spot in Saturn's upper atmosphere, and of energetic ions flowing towards Enceladus: discoveries made using other Cassini instruments.

UCL space missions get the go-ahead