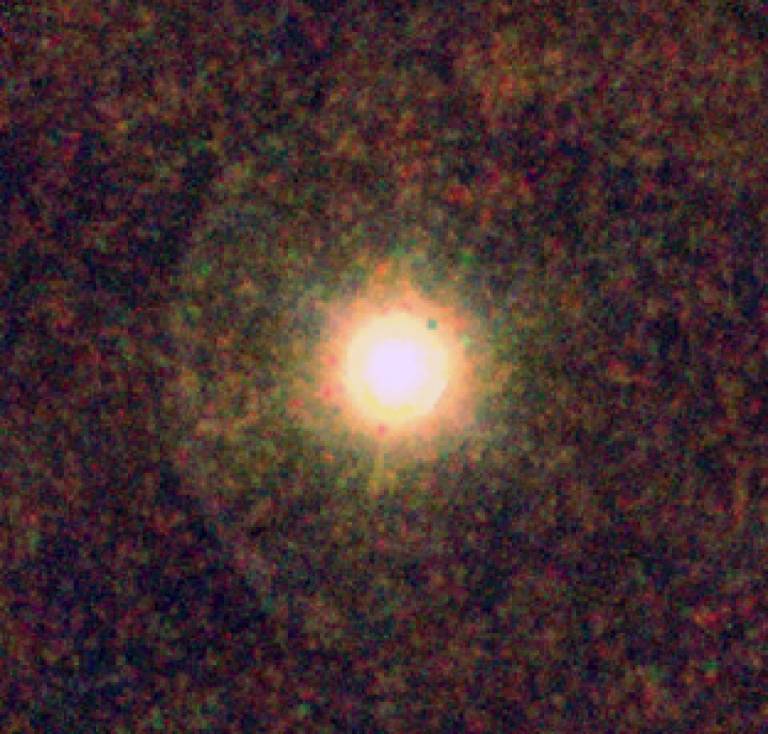 Astronomers at UCL, using the European Space Agency's Herschel Space Observatory, have observed water vapour being formed somewhere it was previously thought to be impossible: in the atmosphere of a red giant carbon star.

The major building blocks of life on Earth are water and carbon-based molecules, both of which are synthesised in large quantities by stars like the Sun as they reach the end of their lives. When they age, these stars become red giants and puff out their atmospheres. These atmospheres have previously been seen to contain either water molecules or carbon-based molecules, and it was thought that these two types of molecules could not co-exist.

New results published today in Nature, from spectrometers onboard the Herschel Space Observatory, have overturned this longstanding concept by detecting abundant water vapour in the atmosphere of a very carbon-rich red giant star, called CW Leonis.

Professor Mike Barlow, from UCL's department of Physics and Astronomy, and co-author of the paper said: "The detection of water vapour lines from the outflowing wind of a carbon star has required a complete re-evaluation of our models for the chemical processes in such outflows and testifies to the exceptional capabilities of the spectrometers on-board the Herschel Space Observatory."

"The abundances are high in all the excitation lines, you can call it water vapour and it's everything from cool, to warm, to hot - right up to levels where you need temperatures of 1,000 kelvin or so (725C)," he added.

CW Leonis is a red giant star in the constellation of Leo, and although it is only a few times the mass of the Sun, it has expanded to hundreds of times its size - if it replaced the Sun in our Solar System it would extend beyond the orbit of Mars. While it is barely detectable at visible wavelengths, even by the largest telescopes, it is the brightest star in the sky when observed in the infrared, at wavelengths ten times longer than those seen by the human eye. Its faintness in visible light and its extreme brightness in the infrared are due to the huge quantities of dust particles that have condensed around it, absorbing almost all its visible radiation but re-emitting it in the infrared.

The star is classified as a 'carbon-star', and at a distance of around 500 light years is the closest such star to Earth. Nuclear fusion reactions deep inside the star are converting helium into carbon, much of which has ended up in the outer layers of the star's atmosphere.

With so much carbon in its atmosphere almost all of the oxygen should be locked up in carbon monoxide (CO), meaning that there should be no water (H2O) present. However, in 2001 the Submillimeter Wave Astronomy Satellite (SWAS) detected emission from CW Leonis at a particular wavelength which shows the existence of water vapour. A possible origin proposed was that the stellar wind was releasing water molecules from a cloud of icy comets around the star.

However, Herschel has detected the definitive signature of water at many more wavelengths, and it is now possible to establish the temperature of the water vapour. It is emitting at temperatures up to 1000 degrees, implying that the water vapour is distributed throughout the stellar wind, including deep down near the surface of the star itself. The model of the stellar wind interacting with a distant icy comet cloud must now be replaced by one in which the water vapour is being created by previously unsuspected chemical processes. These processes include reactions which are triggered by ultraviolet radiation. The ultraviolet light breaks up the carbon monoxide, releasing oxygen atoms that can then react with hydrogen to form water molecules.

The only possible source of the ultraviolet light is interstellar space, but this would normally be blocked by the material flowing from star. It was already known that the stellar wind is 'clumpy', and the Herschel results, published in the scientific journal Nature, have shown that some regions around the star must be almost empty. These empty regions allow the ultraviolet light to reach the deepest layers of the star's atmosphere and initiate the chemical reactions that produce the water.

The new Herschel results imply that analogous processes operate around the red giant stars that continue to supply material for new generations of stars and planets in galaxies like our own Milky Way.

Image: The red giant carbon star CW Leonis as seen by the PACS and SPIRE cameras on board Herschel.  Credit: ESA/PACS/SPIRE/MESS Consortia.

"Ghost particle" sized up by cosmologists