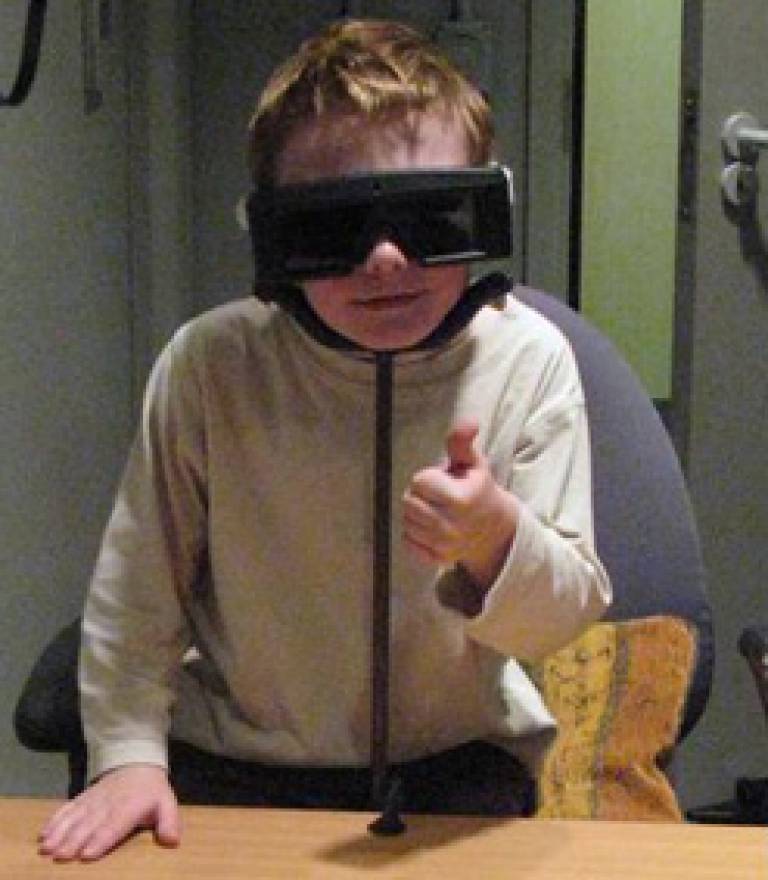 Unlike adults, children are able to keep information from their senses separate and may therefore perceive the visual world differently, according to research published today.

Scientists at UCL (University College London) and Birkbeck, University of London have found that children younger than 12 do not combine different sensory information to make sense of the world as adults do. This does not only apply to combining different senses, such as vision and sound, but also to the different information the brain receives when looking at a scene with one eye compared to both eyes.

The results, published today in the Proceedings of the National Academy of Sciences, imply that children's experience of the visual world is very different to that of adults.

Dr Marko Nardini, UCL Institute of Ophthalmology, and lead author said, "To make sense of the world we rely on many different kinds of information.  A benefit of combining information across different senses is that we can determine what is out there more accurately than by using any single sense."

He added: "The same is true for different kinds of information within a single sense. Within vision there are several ways to perceive depth. In a normal film, depth is apparent from perspective, for example in an image of a long corridor. This kind of depth can be seen even with one eye shut. In a 3D film, and in real life, there is also binocular depth information given by differences between the two eyes."

The study looked at how children and adults combine perspective and binocular depth information. Results show that being able to use the two kinds of depth information together does not happen until very late in childhood - around the age of 12.

Scientists asked children and adults wearing 3D glasses to compare two slanted surfaces and judge which is the "flattest", given perspective and binocular information separately, or both together. It was not until 12 years that children combined perspective and binocular information to improve the accuracy in their judgements, as adults do. This implies that adults combine different kinds of visual information into a single unified estimate, whereas children do not.

However, combining sensory information can result in an inability to separate the individual pieces of information feeding into the overall percept. This is known as "sensory fusion", an effect that has been documented in adults.

In a second study scientists asked whether children might be able to avoid sensory fusion by keeping visual information separate. Researchers used special 3D discs in which perspective and binocular information sometimes disagreed. Because adults tended to take an average of the perspective and the binocular information, they were poor at determining whether the slant of some discs was the same or different as a comparison disc. By contrast, 6-year-olds had no trouble in spotting differences between discs of this kind. This shows that 6-year-olds can "see" separate kinds of visual information that adults cannot.

Professor Denis Mareschal, from the Centre for Brain and Cognitive Development at Birkbeck, who co-authored the study explained: "Babies have to learn how different senses relate to each other and to the outside world. While children are still developing, the brain must determine the relationships between different kinds of sensory information to know which kinds go together and how. It may be adaptive for children not to integrate information while they are still learning such relationships -.those between vision and sound, or between perspective and binocular visual cues."

A future aim is to use functional magnetic resonance imaging (fMRI) to determine the brain changes that underlie children's abilities to combine visual information in an adult-like way.

The research was funded by the Economic and Social Research Council and the Wellcome Trust.

Image: A participant in the vision study.  Credit: Marko Nardini.

The UCL Institute of Ophthalmology aims to develop new treatments for eye disease out of a large and varied foundation of basic research. Its researchers work very closely with Moorfields Eye Hospital NHS Foundation Trust and are part of UCL Biomedicine, one of the largest aggregates of biomedical expertise in the world.

The range of diseases studied extends from inherited retinal degenerations affecting young children to age-related macular degeneration and glaucoma, the most common causes of blindness in the elderly. Currently groups are investigating every stage of the visual process from the mechanics of rods and cones to the brain's interpretation of complex visual scenes. The institute's researchers are making progress in understanding the basic mechanisms of blinding disease and investigating new methods of treatment by conventional pharmacology, gene therapy and cellular therapy including stem cells.