Acute pain is eased with touch of a hand 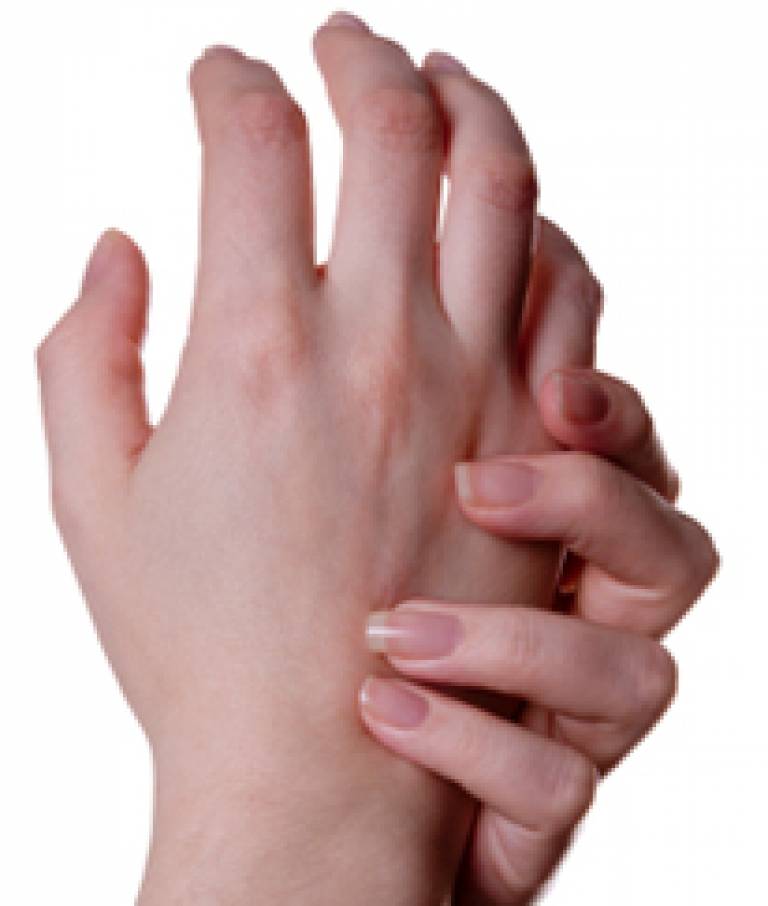 There may be a very good reason that people naturally clutch their hand after receiving an injury. A new report shows that self-touch offers significant relief for acute pain under experimental conditions.

Researchers from UCL Institute of Cognitive Neuroscience suggest that the relief comes from a change in the brain's representation of the rest of the body. The research was published online on 23 September 2010 in Current Biology.

"Pain is quite an important, but also complicated, experience and can be caused in many different ways," said Professor Patrick Haggard from UCL Institute of Cognitive Neuroscience. "We show that levels of acute pain depend not just on the signals sent to the brain, but also on how the brain integrates these signals into a coherent representation of the body as a whole."

Haggard and his colleague Marjolein Kammers, also at UCL, made the discovery by studying the effects of self-touch in people who were made to feel pain using an experimental condition known as the thermal grill illusion (TGI).

"The TGI is one of the best-established laboratory methods for studying pain perception," Haggard explained. "In our version, the index and ring fingers are placed in warm water and the middle finger in cold water. This generates a paradoxical feeling that the middle finger is painfully hot." That's ideal because it allows scientists to study the experience of pain without actually causing any injury to those who participate in the studies.

When TGI was induced in an individual's two hands and then the three fingers of one hand were touched to the same fingers on the other hand immediately afterwards, the painful heat experienced by the middle finger dropped by 64 percent compared to a condition without self-touch. That relief didn't come when only one hand was placed under TGI conditions. Partial self-touch in which only one or two fingers were pressed against each other didn't work either. Nor did it work to press the affected hand against an experimenter's hand that had also been warmed and cooled in the same way.

"In sum," the researchers wrote, "TGI was reduced only when thermosensory and tactile information from all three fingers was fully integrated. That is, TGI reduction required a highly coherent somatosensory pattern, including coherence between tactile and thermal patterns and coherence of stimuli between the two hands."

Haggard said that earlier studies of chronic pain had suggested the importance of body representation in the experience of pain. For example, the phantom pain that is often felt following amputation of a limb appears to lessen with time as the brain converges on an updated representation of the body. Haggard said the new findings extend the important role of body representation to acute pain and may lead to a better understanding of the brain mechanisms involved in chronic pain as well.

The findings might be put to practical use, the researchers say. "Our work suggests that therapies aimed at strengthening the multisensory representation of the body may be effective in reducing pain," Haggard said.