'Colouring The Invisible' is an installation running until 17 December at the UCL School of Slavonic and Eastern European Studies (SSEES) by Julia Vogl, student at the UCL Slade School of Fine Art, that reflects the languages most commonly spoken by the SSEES community. 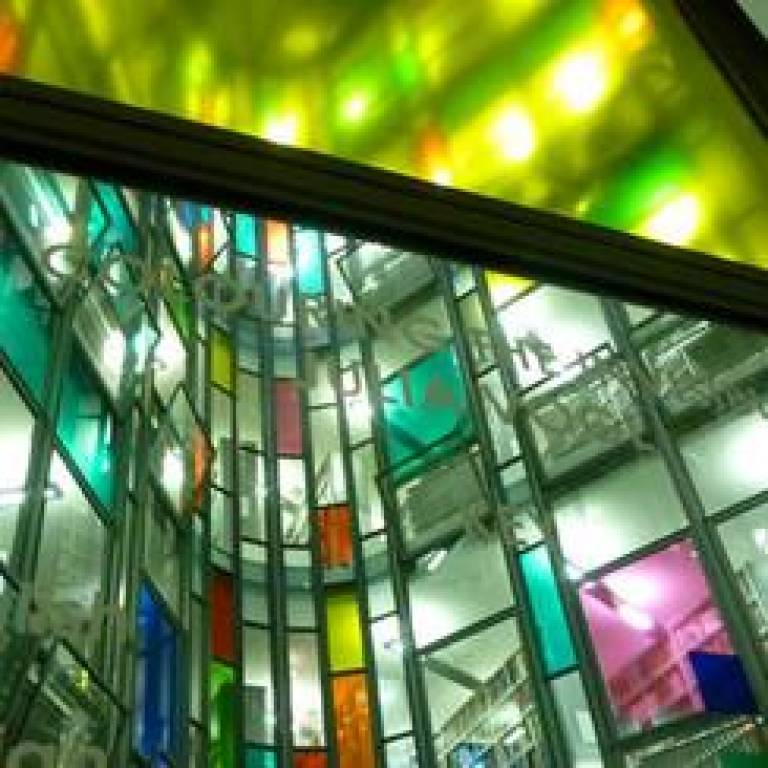 Consisting of over 75 metres of coloured translucent vinyl covering 150 glass windows over five floors, 'Colouring The Invisible' draws on Julia's own multicultural background and that of the SSEES community. Each colour used in this public art project reflects the languages of the faculty and the student body.

Julia said: "Language is so important in this building and it's also one of the those things that you can't see, so the colour is a way of not only identifying the languages that are most commonly spoken in the building but also a way to play off the architectural space."

Created from data which captured over 450 responses to the question: 'What language(s) are you fluent in?' from SSEES students and staff, the work challenges identity and familiarity, whilst transforming the architectural space into a visual spectacle.

Dr Susan Collins, Director of the Slade School of Fine Art said: "Julia's project 'Colouring the Invisible' is an excellent example of how students at the Slade can benefit from and also contribute to the wider UCL culture. It works on a number of levels - literally in terms of its eloquent and elegant central presence within the central atrium of SSEES passing through the entire building; metaphorically in terms of the range of languages that the colours seek to represent; and in terms of engagement, by including the constituents of the building in the fabric and content of the work itself."

Julia is a postgraduate sculpture student at the Slade School of Fine Art. Her work negotiates site specificity, community and colour to create experiences and memories. American and British, with German, Czech and Polish ancestry, Julia's public works include an installation as part of the Heal's Bicentenial Artist in Residence show in February 2010; 'Leaves of Fort Green' in Brooklyn, New York in summer 2009 sponsored by Brooklyn Arts Council; and 'The Library Project' in 2007 at Oberlin College, Ohio.

Julia will be available to discuss the project at SSEES on Tuesday November 2 from 4pm-7pm and on Wednesday November 3 from 10am-1pm.

The UCL School of Slavonic and East European Studies is one of the world's leading specialist institutions, and the largest national centre in the UK, for the study of Central, Eastern and South-East Europe and Russia.

More than 60 academic staff work at the School, teaching and conducting research in the history, economics, politics, sociology, anthropology, culture, literature and languages of the countries of the region. The School has five interdisciplinary research centres and leads the inter-university Centre for East European Language Based Area Studies (CEELBAS).

The Slade School of Fine Art is concerned with contemporary art and the practice, history and theories that inform it. It approaches the study and practice of art in an enquiring, investigative, experimental and research-minded way.

Slade facilities and infrastructure for research support the discourse around painting, sculpture and fine art media. In the recent 2008 RAE, 70% of the department's research activity was recognised as being in the top two categories of 4* ('world leading') or 3* ('internationally excellent').