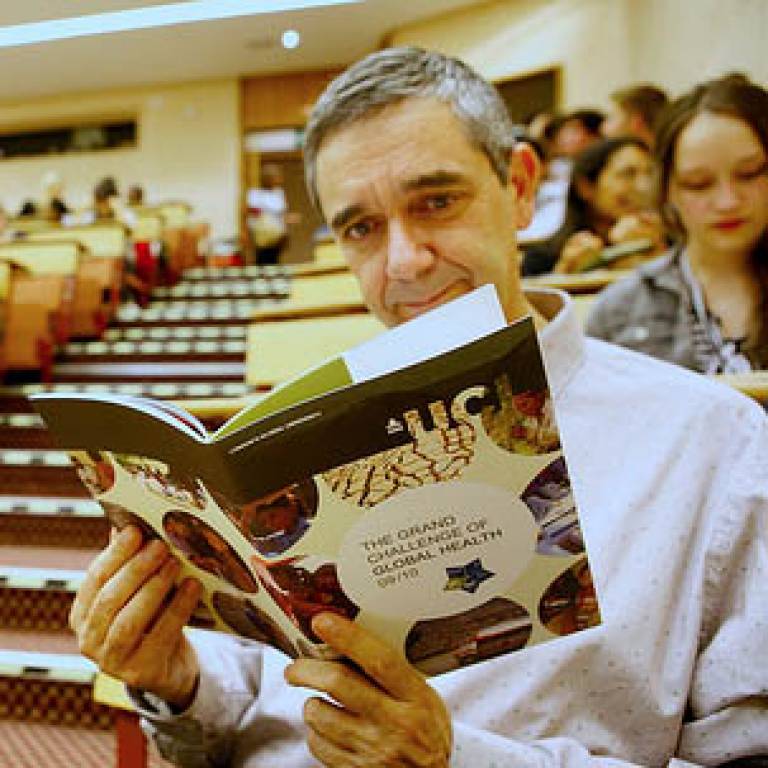 Shivani Singh, a doctoral candidate at the UCL Centre for International Health and Development, discusses the latest research and views on HIV in South Africa presented at a UCL Global Health symposium on 20 October.

"The event about HIV treatment in rural South Africa captured the attention of students, researchers and academics alike.

The interdisciplinary seminar offered varying perspectives on practical treatment issues in the fight against HIV/AIDS in Sub-Saharan Africa.

Along with presenting her research findings, key speaker Professor Marie-Louise Newell of the Africa Centre for Health and Population Studies (seconded from the UCL Institute of Child Health) gave an overarching picture of the successes and failures in the treatment of HIV/AIDS globally.

The theme of the presentation was the examination and adaptation of new prevention programmes for regions such as Sub-Saharan Africa which continue to be disproportionately affected by the disease. This approach marks a shift from a past WHO HIV/AIDS programming goal of treating three million positive individuals by 2005, to using treatment as prevention which could lead to a phasing-out of new infections by 2015.

Professor Newell began her presentation with a global picture of how many adults and children were living with HIV/AIDS in 2008. The vast concentration of positive individuals living in Sub-Saharan Africa, 22.4 million, demonstrates the need for region-specific treatment and policy action. Focusing on mother-to-child transmission (MTCT), Professor Newell showed the effectiveness of prevention by treatment, by providing anti-retroviral treatment (ART) to mothers. When addressing the issue of heterosexual transmission and claims based on statistical models that it is possible to 'treat ourselves out of the epidemic' through treatment upon diagnosis, Professor Newell admitted scepticism, believing that a phasing-out of the disease will take decades.

After discussing shortcomings of the ambitious '3 by 5' initiative which was introduced by the World Health Organization in 2003 (a global target to provide three million people living with HIV/AIDS in low- and middle-income countries with life-prolonging ART by the end of 2005), Professor Newell moved on to research findings from her work in South Africa.

The Africa Centre, based in Hlabisa (KwaZulu-Natal, South Africa) works with the local community in providing frontline care in a rural area heavily affected by the disease. The centre - which through 17 health posts provides treatment primarily through counsellors and nurses - also gathers data on the impact of ART within the local community.

Professor Newell estimates that the programme has had a large impact on reducing the transmission of HIV from mother to child, using treatment as prevention, stating 'children whose mothers were HIV-infected but not on ART were three times more likely to die, while children whose mothers initiated ART were no more likely to die, than children of HIV negative mothers'.

The findings emphasise the need for treatment for women, as young women are considered a high-risk group. Professor Newell did mention some of the potential issues which may complicate the trial, including risk of migration and risk of contamination, as well as the fact that testing is taboo in many communities. In studies of this nature these are common concerns and Professor Newell went on discuss how the team works to control issues of cross-contamination through containment of social and sexual networks.

Ms Sseruma - who has a wealth of experience through working with several organisations within the field - spoke passionately about the need for treatment as prevention, and the need for positivity and hope when dealing with issues which affect people living with HIV and/or AIDS.

In agreement with Professor Newell, Ms Sseruma supports the need for testing of new programmes in order for treatment to be given in greater numbers and more quickly. Ms Sseruma also advocates a change in the CD4 count upon which treatment is started. A CD4 count indicates how weakened the immune system is from the replicating HIV virus, with the higher the count the stronger the immune system. In moving the CD4 count requirement from 350 to 500, treatment will be available for more individuals and will be started earlier.

Taking a different approach to the topic, Professor Wolff discussed some of the ethical implications of HIV/AIDS as a funding priority, including the diversion of funds from other health programmes.

He challenged the audience to consider that there are a multitude of health problems which cause mortality in the developing world, and that systemic issues such as 'brain drain' must also be examined for their implications for health promotion.

The discussion which followed the presentations ranged from the specificities of Professor Newell's trial and methodology, as well as questions for the panellists regarding treatment as prevention.

In conclusion, this session provided an illuminating and original perspective on an issue which has been at the forefront of health debates for decades. It is through new studies and trials that we can hope to address inequality and the vital need for treatment for those most susceptible to HIV/AIDS."

The UCL Institute for Global Health is:

Beyond UCL, it is: