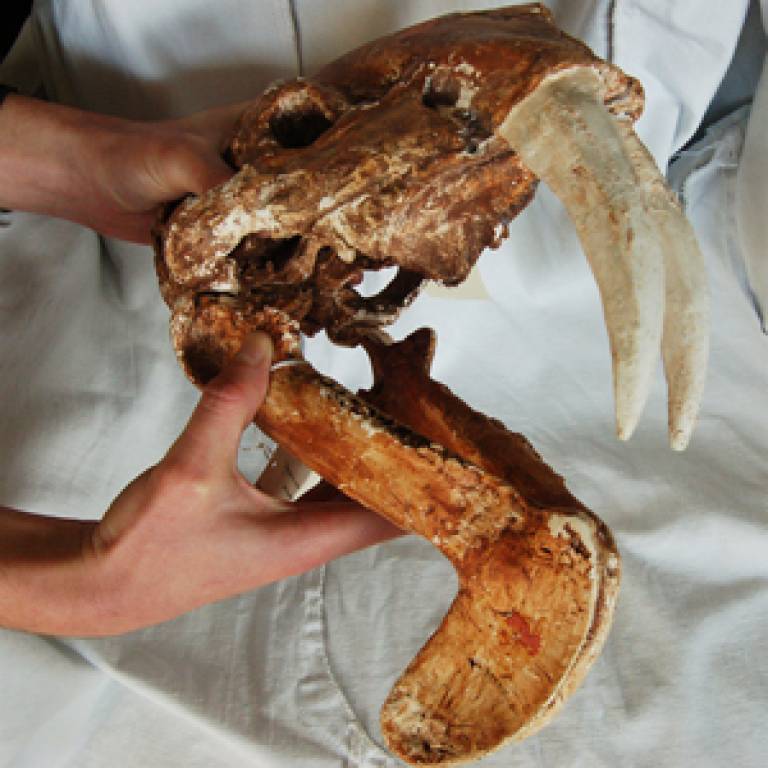 Marsupial carnivores, including bizarre pouched lions, wolves, and sabretooths, were once as diverse in their appearance as their placental counterparts are today, according to new research.

Millions of years ago large marsupial carnivores dominated both Australasia and South America.  Today, the Tasmanian Devil is the largest marsupial carnivore left, and is on the brink of extinction. Why these large pouched predators have dwindled is a mystery, but one explanation is that they couldn't compete with their placental counterparts, like ordinary lions and tigers, because of the constraints of marsupial development.

Now, by looking at the skulls of living and  fossil marsupial and placental carnivores from around the world, scientists have shown that the diversity between species in marsupial carnivores was in fact slightly greater than it is in more familiar placental carnivores, even though there were fewer species overall.  The research is published today in the Proceedings of the Royal Society B.

Animals as strange as the sabretooth marsupial with its huge ever-growing canine teeth once ruled South America.  Marsupial lions were also common in Australia, along with marsupial wolves - the last of which died a mere 75 years ago.

Applying an approach known as geometric morphometrics to map out and analyse whole skulls of living and fossil species, an international research team have shown that the variation in shape in marsupial carnivores is greater than that observed in placentals - even though the marsupial sample was smaller. The findings are based on data collected from museums on five continents, including members of a wide range of living and extinct mammalian carnivore families in their study.

The research suggests that marsupial carnivores died out not because of a lack of of evolutionary diversity.  Competition with placental mammals during the fusion of North and South America and more recent man-made extiction are both likely reasons for marsupial decline.

"One of the popular ideas among evolutionary biologists about marsupials is that they aren't able to evolve strange morphologies in their hands or face, because they are born so young and need to use these parts of their bodies to crawl into the pouch and then suckle for many months," said Dr Anjali Goswami, the lead author of the paper from the UCL Departtments of Genetics, Evolution and Environment and Earth Sciences.

"While previous research suggests that this is true for the hands (you can't crawl to the pouch with a flipper!), our study shows that the same doesn't seem to be true for the mouth.  Even if they develop their mouths just a few weeks after conception and then spend months or years suckling in the pouch, the marsupial carnivores have still been able to evolve the most extreme specializations for carnivory observed among mammals," Dr Goswami added.

Dr Stephen Wroe from the University of New South Wales, and a coauthor commented:  "It seems likely that the diversity in skull shape among marsupial carnivores reflects a diversity in lifestyle that once was quite comparable to that of placentals.  Our results reinforce my own suspicion that the lack of marsupial predators in the world today has more to do with bad luck than bad genes."

Image caption: Although superficially similar to the placental sabretoothed cats, like Smilodon fatalis, the extinct sabretoothed marsupial, Thylacosmilus atrox, shown here, is the only mammalian carnivore to have evolved ever-growing canines, making it one of the most formidable predators known in mammalian history.  Image (c) UCL, Grant Museum of Zoology

Inside Nature: Henry Gee at the UCL Grant Museum of Zoology
Mother's care is key to a big brain