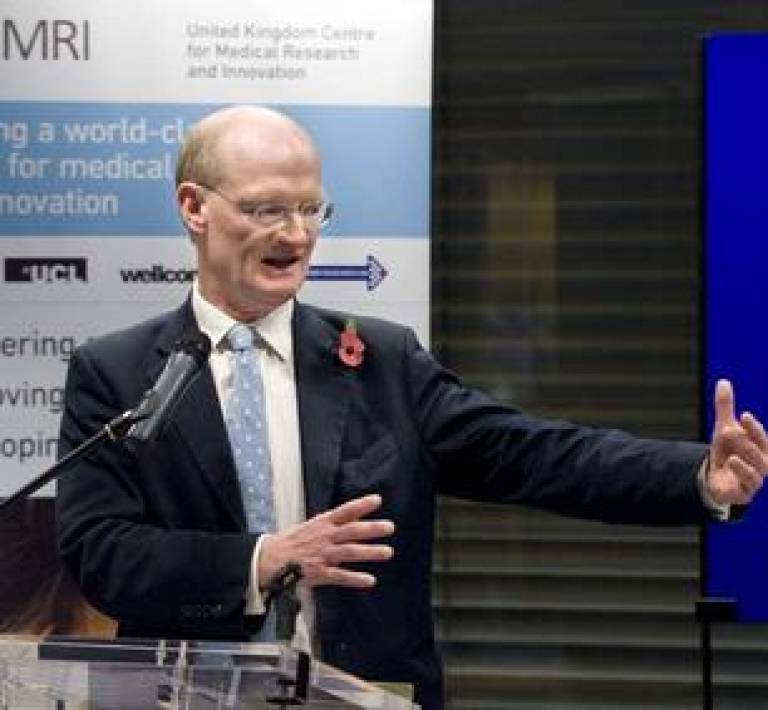 The consortium behind the UK Centre for Medical Research and Innovation (UKCMRI) has formally agreed to build the new institute at St Pancras and Somers Town in the London Borough of Camden.

The Medical Research Council (MRC), Cancer Research UK, Wellcome Trust and UCL signed an agreement yesterday to set up UKCMRI as a charitable foundation subject to the agreement of the Charity Commission.  The signing ceremony was attended by the Minister for Universities and Science, David Willetts MP and Health Minister Lord Howe.

When he set out the Government's National Infrastructure Plan in October, the Prime Minister, David Cameron, identified UKCMRI as a key part of the country's future economic development. The plan followed confirmation of the Government's share of funding in the Spending Review. Describing scientific research as "vital to our future economic success", the Chancellor of the Exchequer, George Osborne, announced Government funding subject to approval of the MRC's full business case.

The £600 million Centre will prevent and cure disease, create jobs and harness a sector of the economy in which the UK is a world leader. It will investigate fundamental biological processes underlying human health, and will study diseases that affect people across the UK, including cancers, heart disease and stroke, infections, diseases of the immune and nervous systems and the degenerative conditions linked to ageing.

The Minister for Universities and Science, David Willetts MP, said: "I am delighted to be present at the signing of the Joint Venture Agreement for UKCMRI. This will be crucial for British biomedical research in the future.  The four partners will create a world class centre with a mix of expertise and critical mass to capture cutting-edge science for the benefit of patients."

Health Minister Lord Howe said: "As a Government, we want to deliver health outcomes that are amongst the best in the world. When resources are under pressure, research is even more important in identifying innovative ways of preventing, diagnosing, and treating disease for a productive 21st century NHS. We know that investment in UK science research and its translation to the NHS is key to our future health and our future prosperity. This is why we will be increasing spending on health research in real terms over the Spending Review and providing £220 million of capital funding for UKCMRI."

Professor Malcolm Grant, President and Provost of UCL, said: "The signing today is an important milestone for UKCMRI and it is a testament to the national and international significance of the project that we have reached this stage in difficult economic conditions. We at UCL are extremely pleased that the government has confirmed its financial contribution to the project, allowing the founding partners to make this formal commitment to funding today."

UKCMRI will bring together staff currently working at the MRC's National Institute for Medical Research and Cancer Research UK's London Research Institute with researchers from UCL. The institute will house scientists from a range of disciplines including biologists, chemists, physicists, engineers and computer experts to promote novel ways of working. The building, planned by a team led by the architects HOK working with PLP Architecture, is designed to foster innovation by allowing collaboration between different academic disciplines.

The Development Control Committee at the London Borough of Camden will consider the planning application for the building on 16 December.

The UK Centre for Medical Research and Innovation (UKCMRI) is an unprecedented partnership between four of the world's leading biomedical research organisations: UCL, the Medical Research Council, Cancer Research UK and the Wellcome Trust.

It will carry out research of the highest quality using the latest technology to advance understanding of human health and disease. The institute will be constructed on 3.6 acres of land at Brill Place, to the north of the British Library in the St Pancras and Somers Town area of north London.