Forensic science in the UK: where do we go from here? 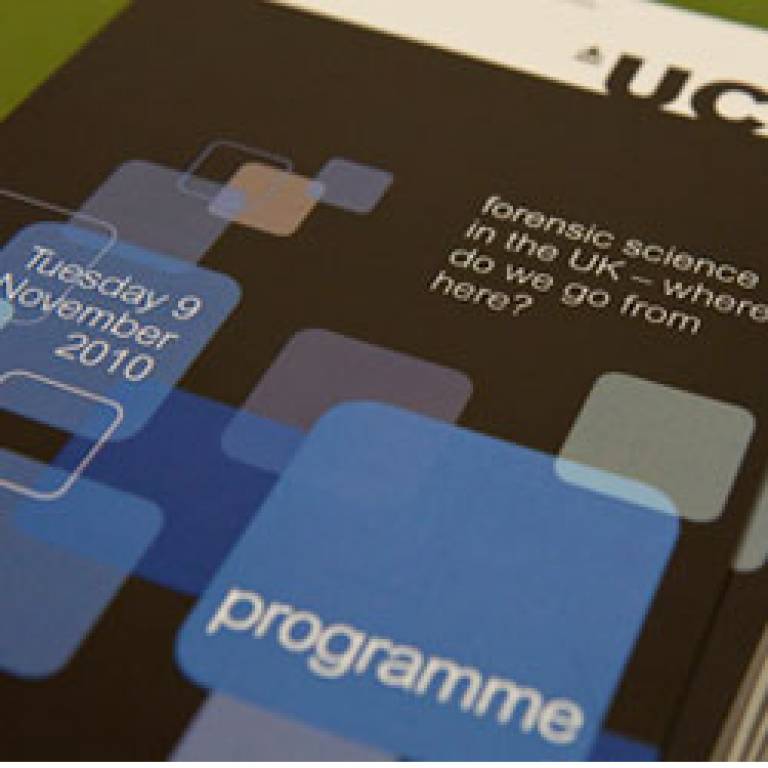 Tuesday 9 November marked the launch of the UCL Jill Dando Institute Centre for the Forensic Sciences.

The event is reviewed below by Dr Peter Bull, Fellow and Tutor at Hertford College, Oxford, who teaches a course on forensic geology and geography for undergraduates and supervises research projects on the subject of forensic trace materials.

"Academic forensic science researchers/practitioners tend to be a lonesome bunch who normally research their fields of interest solo or in very loose collaboration in a more peripatetic way. So imagine my surprise when collecting my badge and programme at the Gustave Tuck Lecture Theatre to notice that there were 200 or more badges awaiting arriving delegates. Now, I am sure that I have not met 200 forensic scientists in the last 20 years or so and yet by the time the programme started every seat was taken and there seemed to be another 40 or 50 on a balcony behind me.

As the evening unfolded, I realised that there were, apart from those who spoke or who were on the panel, delegates representing forensic science providers (from chief executive officers to research scientists), the police (local forces, the Met, National Police Improvement Agency), government (Home Secretary's Office, House of Commons Science and Technology Committee, Criminal Review Board, Crown Prosecution Service, Japanese Embassy), the judiciary and the press (the Daily Mirror, Police Oracle, The Times). Perhaps however, the most impressive thing I noticed was the large number of UCL academics who came from at least a dozen or more different departments and all of whom seemed heavily committed towards this Centre.

The enthusiastic support for the Centre came not only from the delegates present. Initiating the proceedings was a truly wholesome appraisal of the potential of the Centre by Professor Dame Hazel Genn. If such praise was not enough, Professor Genn identified the potential link with the new Institute for Judicial Studies. I remember thinking that this collaboration of two Centres had the potential to be world leading and something that the forensic sciences have sorely needed over the past dozen or more years.

The opening was followed by an outline of the vision of the Centre by Dr Ruth Morgan, the director of the Centre, and this was followed by the panel discussion, ably and of course professionally chaired by Nick Ross who has long association with the Jill Dando Institute.

Intelligent and lively panel appraisals were given by a diverse range of individuals who covered all aspects of the Centre's research programme. Professor Philip Dawid began with a clear précis of statistical problems in forensic interpretation and the complexity of achieving reliable and accurate forensic science for a court - this was illustrated by demonstrating a 'very simple' concept which on further reflection was anything but 'simple'.

Simon Ford, a multi-BAFTA-winning executive producer provided a typically modest appraisal of his contribution to forensics but identified the need for the Centre to 'bring the press with them' when reporting forensic science.

Alex Milne QC provided the coalface requirements and needs for the forensic sciences to address. His was an honest and illuminating discourse regarding the abilities of judges, barristers and juries in understanding forensic terminology.

Dr Ann Priston spoke as President of the Forensic Science Society and as a leading exponent of the application of DNA in forensic science. She highlighted the large numbers of undergraduates being awarded forensic science degrees, pointing out the lack of opportunity for those students in the field at the cessation of their courses.

Gary Pugh (Director of Forensic Services at the Metropolitan Police) provided a no-nonsense appraisal of the contribution of forensic science in policing and more intriguingly of what was needed in the future.

Finally, UCL Provost Professor Malcolm Grant, spoke of his great optimism for the Centre, its coordination with the faculties of Engineering, Laws and Mathematical and Physical Sciences and its influence both as an outreach institution to practitioners, academics, policy makers around the UK, as well as its capacity to foster the integration of so many departments and faculties within UCL to work together to pioneer innovation in the forensic sciences.

I came away from the event with a feeling that I've never had at any other forensic science conference, national or international. The Centre has great potential, has a strategic and excellent research programme and seems to have filled a void that I believe has been present for some time in British forensic science coordination. One thing that struck me on the train home was that we've got nothing like that in Oxford. Well done UCL - you've stolen a march on everyone else!"

Dr Bull is a sedimentologist who has lectured at the Oxford University Centre for the Environment and Hertford College for the last 30 years. Together with academic commitments he is involved as an expert witness in criminal cases at both the Crown Court and Court of Appeal. He is on the board of Inside Justice, a not-for-profit miscarriages of justice unit.

The Jill Dando Institute Centre for the Forensic Sciences is a new initiative at UCL. Its mission is to contribute significantly to the development of the forensic sciences through high quality multidisciplinary research, teaching and learning, and through the establishment of collaborative projects with external partners.