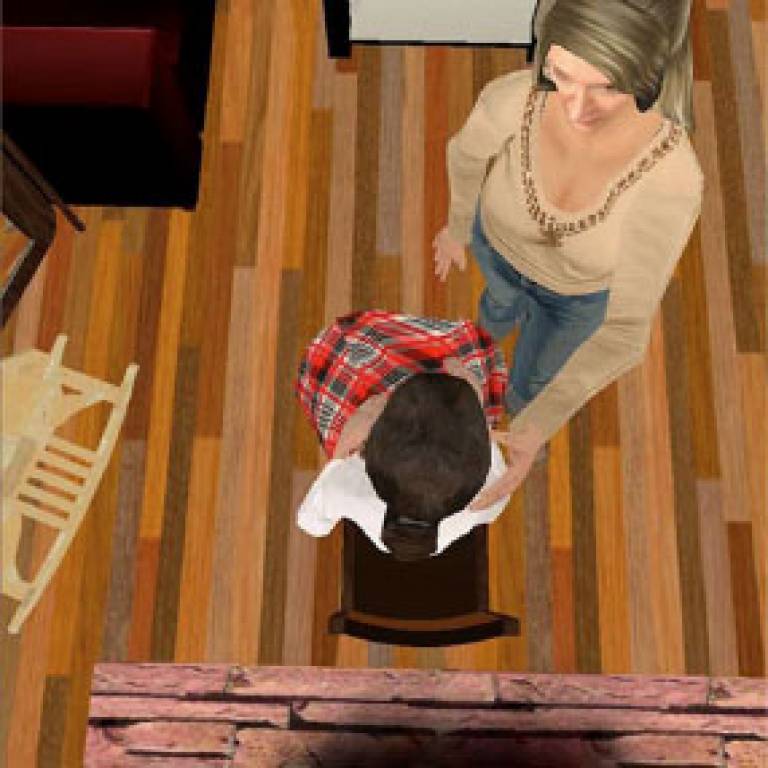 Is it possible to have the illusion that your body has changed radically, or that a different body is your body?

Mel Slater, Professor of Virtual Environments at UCL Computer Science, describes the findings and scientific applications of research he has conducted into the phenomenon of 'body transfer' in virtual reality, published today in PLoS ONE.

"This question is an important one for scientists since it addresses a critical part of how our brain works, how does it distinguish between what is and what is not part of our body.

From common sense the answer would seem to be 'no', since our body is apparently something constant, that changes only slowly, with age, diet and physical exercise.

In our article published today, my colleagues and I show that it is possible to give people the illusion that their whole body had changed using virtual reality.

In our experiment, 24 men put on a head-mounted display, which placed them in a virtual room where they saw two virtual people: an older woman who was standing and stroking the arm of a seated young girl.

After observing this scene for a few minutes, the viewpoint of the men was transferred to that of the virtual girl: when they looked down at themselves they would see in virtual reality that their body had been substituted by the virtual body of the girl. If they looked in a virtual mirror they would see the reflection of themselves as the girl's body. When the woman stroked the shoulder of the girl's body they would feel this on their own real body. Thus there was a synchrony between what they saw in the virtual reality and what they felt.

Our results showed that with this setup men could be given the illusion that their body had temporarily changed to be that of the girl.

There are several applications of this research. One is scientific, since the results help scientists to understand how the brain maintains a representation of the body - how it distinguishes between what is and what is not part of ourselves. This is an important scientific question that has received a lot of attention in recent years after the discovery of the rubber hand illusion by Botvinick and Cohen (Nature, 1998). Follow the YouTube link above for an  explanation by Olaf Blanke.

Another application is for rehabilitation, for example to help people overcome medical problems to do with body distortion illusions and associated pain. The technique can also be used for entertainment, where you transform yourself as well as the scenario in which you are acting. Finally, it shows the power of virtual reality, not only to transform the sense of where we are, but also of who we are."

Image: The virtual room and characters viewed by the research subjects through head-mounted displays