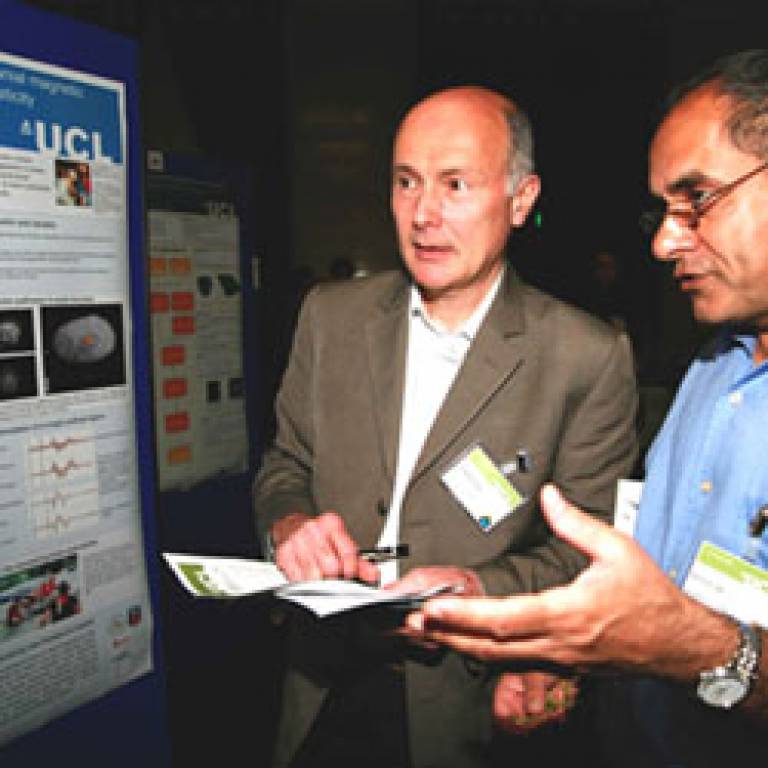 The inaugural UCL Neuroscience Symposium was held at Senate House on April 29 2010.

The aim of the symposium was to bring together this large community, which is one of the strongest, liveliest and most joined-up set of neuroscientists in the world. 500 researchers from across UCL (together with representatives from the major funders, relevant companies and special guests) attended the conference to hear a diverse selection of talks from some of our top neuroscientists, and to see 150 posters.

From decoding memories to unravelling brain asymmetry, synapse proteins to child and adolescent brain development, the symposium truly covered the range of neuroscience research at UCL, both laboratory-based and clinical.

Jon Driver, Royal Society Research Professor, Institute of Cognitive Neuroscience and the Wellcome Centre for Neuroimaging at UCL, said: "The event fulfilled my hopes in bringing different parts of the wide-ranging UCL neuroscience community together, generating new momentum, and creating a collective awareness of the unrivalled strengths and opportunities we have here."

Feedback from the symposium has been overwhelmingly positive, with one attendee stating:

"It really brought all of UCL neuroscience together and I realised just how strong it is. This meeting was better than many an international meeting that I've been to - and yet, this was just UCL people! Pretty impressive!"

The success of the event illustrates how important it is to unite people from across UCL who, despite having common interests, might otherwise meet only at external conferences. Sir John Tooke, UCL Vice-Provost (Health), who opened the symposium, commented that UCL now hopes that other areas may follow the exemplary integrative initiatives of UCL neuroscience.

Poster prizes of £500, £300 and £200 were provided by UCL Business. The winners were: Hermann Cuntz from the UCL Wolfson Institute for Biomedical Research; Laura Mantoan from the UCL Institute of Neurology; and Carola Zimmermann from the Laboratory of Molecular and Cell Biology.

"Receiving the prize for the best poster here was a special honour to me, particularly considering the high quality and number of contributions from my colleagues at UCL. I think everybody was really impressed by the incredible size and diversity of the neuroscience community at UCL, which was highlighted by this first local neuroscience symposium," said prizewinner Hermann Cuntz.

Sir John Tooke also announced the latest news on the Sainsbury-Wellcome Centre for Neural Circuits and Behaviour at the symposium, which it is envisaged will stand on the site currently occupied by the Windeyer Building. The Gatsby Charitable Foundation and the Wellcome Trust are collaborating with UCL for the purpose of developing a new research centre to support individual researchers in the field of neural circuits and behaviour in the UK and the Republic of Ireland.

The Centre will address a fundamental challenge in modern biology, determining how neural circuits process information and direct behaviour. Advances in this field will transform understanding of brain function, and ultimately lead to new ways of monitoring and regulating brain activity in health and disease.

Images from top: Delegates discuss a research poster, and a packed house takes in a presentation

Watch: Mini-lecture on autism and talent