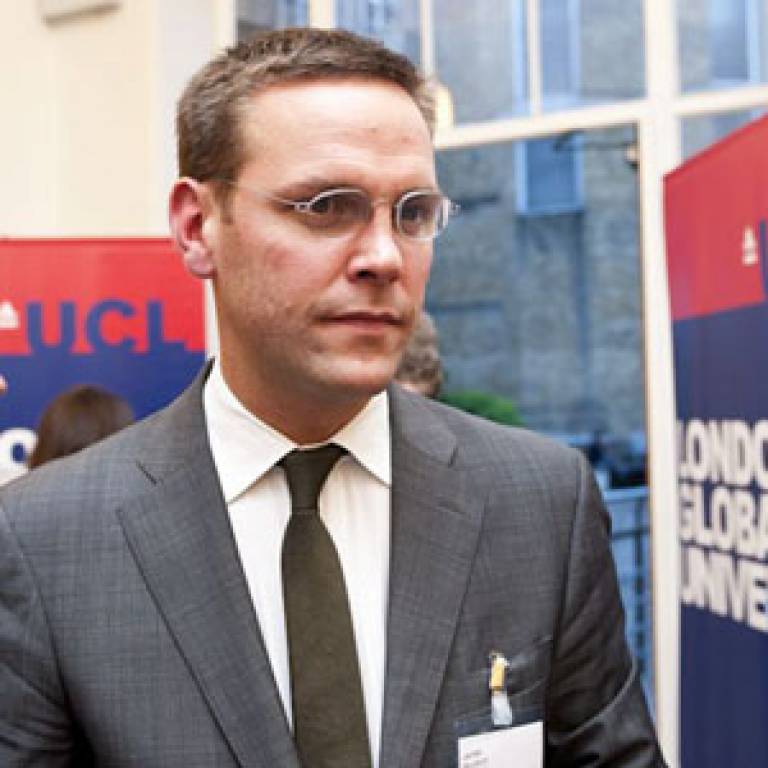 James Murdoch of News Corporation last night spoke at the launch of the UCL Centre for Digital Humanities.

The Centre for Digital Humanities brings together research from the traditionally separate disciplines of computing and humanities to create new tools that enhance the understanding and study of the humanities and culture heritage.
The Centre's researchers will also analyse the impact of these new techniques on cultural heritage, memory institutions, libraries, archives and digital culture.

Dr Claire Warwick, Director of the UCL Centre for Digital Humanities, said: "UCL Digital Humanities applies world-leading computational research to the subtleties of our experience of the arts, and our history and culture. It brings together the best and most exciting work at the intersection of technology and what makes us human. Our experience of reading, listening to music, going to a museum or gallery or using historical documents will increasingly be affected by digital resources, and UCL aims to be at the forefront of such developments."

James Murdoch, Chairman and Chief Executive, Europe and Asia of News Corporation, said: "I am delighted to help launch the UCL Centre for Digital Humanities. Digital technology has significantly changed the way we communicate and share knowledge. The Centre holds great promise, not only for finding new ways of applying technology to the study of the human record but also for providing insights and perspective on how we think about culture and creativity in the future.

"As a discipline, the digital humanities have grown from the simple use of databases in scholarly work, to an approach championed here at UCL: a partnership in which technology is neither the servant of the humanities, nor its master, but an equal partner. The result has been a balance that has fostered innovation on both sides.

"To take one example from the work you do here: the digital exploration of the complex stratigraphy of the Vindolanda tablets from Hadrian's Wall. That work has led in turn to the improvement of scanning and diagnosis of breast cancer. Or how 3D imaging is being improved through the challenge of being applied to ancient material like the fragments of the Thera frescoes: tiny pieces of which can now be recombined more accurately and quickly than could have been achieved by human eye and hand.

"And I must also mention the project that aims to bring together the voluminous unpublished writings of Jeremy Bentham into a single digital resource. This is an act both of scholarship, and of filial piety towards one of the founding fathers of University College itself. And I understand that Bentham himself will be presiding both in spirit and in body over our drinks later tonight.

"These initiatives - and there are many more - reflect the way in which the world of scholarship now has the benefit of technology that would have amazed a scholar working even a decade ago, let alone in Bentham's day."

Digital humanities involve the study of texts, images, film, sound, performance, and objects from museums, galleries or archaeological digs, among other artefacts. It covers the creation of digital models, collections, software, systems and interfaces, as well as the study of how audiences use these kinds of resources. Key areas of interest include how digital data and objects may be retrieved, organised, collected, curated and preserved for future use.

The Centre already has several projects to its name, many of which involve collaboration with departments and centres across UCL - such as the UCL Centre for Advanced Spatial Awareness, the Deafness Cognition & Language Research Centre and the UCL Slade Centre for Electronic Media in Fine Art - as well as external organisations, such as The National Gallery, the Science Museum and the Southbank Centre. Examples of projects include:

Image: James Murdoch at the launch of the UCL Centre for Digital Humanities