Links UKCMRI - Scientific vision and research strategy (PDF) UKCMRI - Design briefing (PDF) A consortium of the UK's most prestigious scientific and academic institutions has laid out its plans for the biggest centre for biomedical research and innovation in Europe. 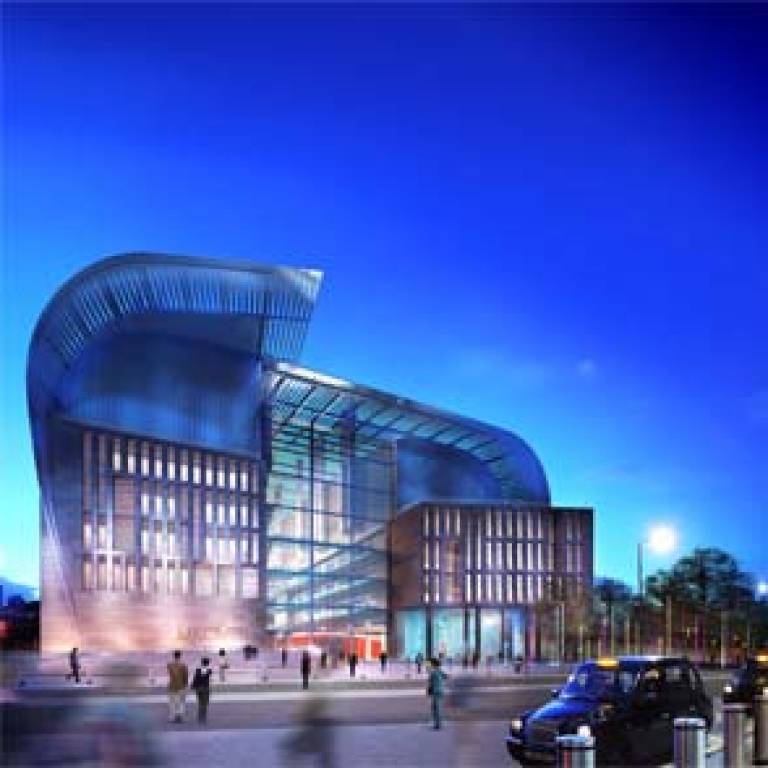 The UK Centre for Medical Research and Innovation (UKCMRI). UCL is one of the four founding partners for the venture,along with the Medical Research Council (MRC), Cancer Research UK and the Wellcome Trust. The consortium today released its vision for the institute alongside designs for the building dubbed a 'cathedral for science'. UKCMRI will be based at St Pancras and Somers Town in the London Borough of Camden.

The vision was drafted by a panel of leading international scientists who came together to conceive of an institute capable of tackling the underlying causes of our most challenging health problems.

They were advised by experts from Oxford, Cambridge, Yale, Harvard, the US National Institutes of Health and other world-renowned institutions, as well as biotechnology and pharmaceutical industry leaders.

The building, planned by a team led by the architects HOK working closely with PLP Architecture, is designed to foster innovation by allowing collaboration between different academic disciplines.

The chairman of the Scientific Planning Committee - the Nobel Laureate and President of Rockefeller University, New York and incoming President of the Royal Society - Sir Paul Nurse, explained: "UKCMRI aims to break down the traditional barriers between different research teams within institutes and between disciplines, encouraging biologists, clinician scientists, chemists, physicists, mathematicians, and computer scientists to work together to answer shared questions. With 1250 scientists working with an encompassing infrastructure, UKCMRI will provide the critical mass, support and unique environment to tackle difficult research questions."

Professor Malcolm Grant, President and Provost of UCL, said: "UCL is fully committed to UKCMRI as one of its founding partners. All four partners are major UK scientific institutions and bringing them together will be a major step forward for UK medical research. UKCMRI will be sited at the heart of a cluster of London's leading scientific, academic and hospital institutions. This brings numerous benefits locally as well as nationally and we anticipate that UKCMRI will be a vital catalyst for jobs and regeneration in Camden."

Annual budget of over £100m

Image: Design of the atrium of the UK Centre for Medical and Research Innovation

As an international centre of excellence in biomedicine, UCL collaborates with many other universities, hospitals, biomedical research charities and research centres.

UCL has wide-ranging and long-standing relationships with all of the partners in UKCMRI. As well as the sponsorship of individual researchers and research studies, all three of UCL's partners co-run centres at UCL, including the Wellcome Trust Centre for the History of Medicine at UCL, the MRC Laboratory for Molecular Cell Biology and the Cancer Research UK & UCL Cancer Trials Centre.

UCL tops the THE league table in research grant wins