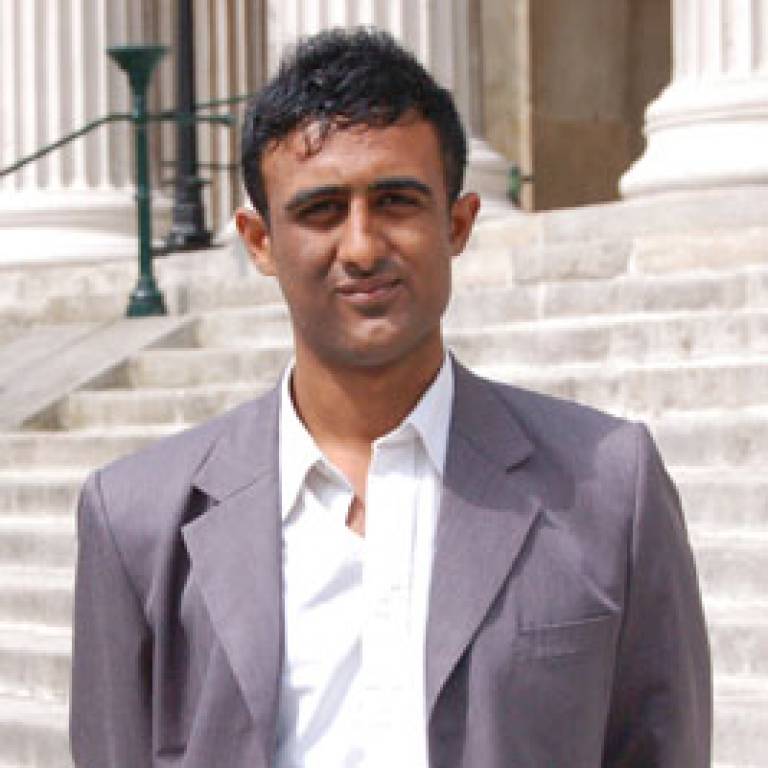 UCL student Zain Jaffer has been selected as one of the youngest of the future top 80 'world leaders' to attend the Graduate Studies Programme at Singularity University, an exclusive programme run at the NASA's Ames Research Park in Silicon Valley.

The Singularity University lecturing staff is made up of Nobel Laureates and business leaders including Google co-founder Larry Page. The students will work together to solve some of humanity's greatest challenges and will participate in hands-on excursions to leading Silicon Valley labs and companies. As part of the trip the students can also take part in zero gravity flights.

22-year-old Zain Jaffer launched his first internet company at the age of 15 when he remotely directed software engineers in the East to build websites for clients in the West. He soon learnt how to get the highest rankings in most search engines and quickly built up his own network of profitable websites. By 18, he had worked with Mozilla Firefox, and was 'hand-picked' by Google as one of their biggest advertising publishers to trial video adverts for MTV.

Today, he is a part-time student on the UCL MSc in Technology Entrepreneurship course who runs his own business. He says: "I hope to use the programme as an opportunity to work with companies such as Google in order to further develop my plans to use emerging technologies to teach children around the world how to use a variety of software, with the ultimate aim of enabling them to generate their own income in the future. I am also looking to inspire entrepreneurial thinking in children so that one day they may consider starting a business of their own".

UCL is keen to support Zain and has pledged over £9,000 to cover expenses with the remainder coming from corporate sponsors.

Zain adds: "Even in these tough economic circumstances, UCL has made a substantial donation which is representative of their overwhelming support for entrepreneurs; much of which I have already witnessed as part of my course."

Dr Dave Chapman, UCL director of the programme, says: "Support for this programme reflects UCL's intent to recognize, promote and celebrate the efforts and accomplishments of UCL's most innovative and entrepreneurial academics and students. As a part-time student who also runs his own start-up business, Zain is passionate about harnessing new technologies to deliver social benefit. UCL's MSc in Technology Entrepreneurship provides an ideal environment which enables him to refine and test business concepts in a supportive yet rigorous and critical environment where he is able to leverage the experience of an extensive network of entrepreneurs, academic staff and like-minded students."

"Salim Ismail, Executive Director of Singularity University, says: "An early education in science, technology, engineering, and mathematics is key to effectively addressing and solving humanity's grand challenges - now and in the coming years. Zain's history and plans for educating children in developing nations, as well as his strong entrepreneurial sense, made him an ideal candidate for Singularity University's Graduate Studies Programme. We look forward to welcoming him to the programme, and to his accomplishments throughout the summer and in the future."

Singularity University (SU) is an interdisciplinary university whose mission is to assemble, educate and inspire a cadre of leaders who strive to understand and facilitate the development of exponentially advancing technologies in order to address humanity's grand challenges. With the support of a broad range of leaders in academia, business and government, SU hopes to stimulate groundbreaking, disruptive thinking and solutions aimed at solving some of the planet's most pressing challenges. SU is based at the NASA Ames campus in Silicon Valley.