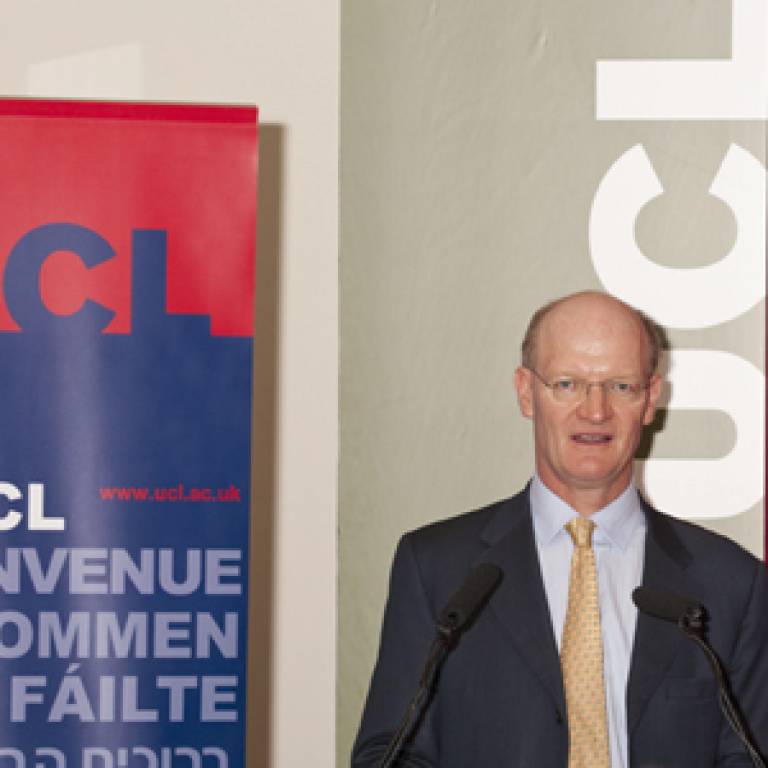 David Willetts, Minister of State for Universities and Science, today paid tribute to the pioneering role that UCL has played in the history of UK space science.

Mr Willetts gave the keynote address on the final morning of a three-day visit to UCL by eminent space scientists from the Institute of Biomedical Problems and other leading research institutes in Russia.

He said: "It's particularly right that this cooperation in science between Russia and the UK should be having this conference here, because there is a shared history: the Mullard Space Science Laboratory, founded in 1953, is an important part of UCL, and indeed led to the launch in 1957 of the UK Skylark in exactly the same year as Russia launched Sputnik.

Mr Willetts pointed out that UK science and engineering teams are currently involved in more than 20 active missions, and that the UK has about £5.6 billion of economic output directly linked to its space sector, which supports 68,000 jobs across the British economy.

He also referred to the creation in March of this year of the UK Space Agency, which has been designed to bring together the different parts of the public sector that have an interest in and contribution to space activities, in order to lead to stronger management of UK civil space activities across government.

The event - organised by UCL's Dr Anna Clark and Steve Bourne at the International Science and Technology Centre (ITSC) - was conceived to foster new research relationships between the UK and Russia.

It was hosted by UCL Space and Climate Physics and the UCL Mullard Space Science Laboratory, where the delegation spent a full day discussing potential collaborations, with support from the UCL Office of the Vice-Provost (Enterprise).

Professor Alan Smith, Director of the UCL Mullard Space Science Laboratory, chaired the entire event and welcomed the delegates to the final interactive day, which featured a number of one-to-one discussions between the international delegates on potential research collaborations.

Professor Stephen Caddick, UCL Vice-Provost (Enterprise), described the variety of UCL's research excellence and ensuing successful industrial applications. He said: "The job of institutions like UCL has never been more important. I believe the education of students and the pursuit of knowledge through research is going to drive a knowledge-based economy - that is going to mean an incredible opportunity for us, but also a large responsibility which we take very seriously.

"One of the ways in which we achieve the impact to society and to our economy is through the translation of research and teaching into the wider community - and we do that without boundaries. We know that science, technology and all academic activity knows no international boundaries, and research collaborations such as the one that we are celebrating and engaged in today are vitally important in maximising the impact of our academic endeavours."

The programme of events included presentations by Russian scientists on a wide variety of topics, including space medicine; satellite communication technologies; optics and instrument systems; monitoring and natural disasters; and robotics and cybernetics.

UCL signed a memorandum of understanding with its Russian partners, the Institute of Biomedical Problems, Moscow, the Central Research & Development Institute for Robotics and Cybernetics, the St Petersburg State Polytechnical University, and the Institute of Physics of the Earth, Russian Academy of Sciences.

The parties agreed to investigate and seek to pursue collaborative research in areas including the following:

The ISTC agreed to consider the facilitation of these projects, which may include support in travel funds for Russian and other participating scientists from ISTC beneficiary countries.

The Russian visit was supported by the British Embassy in Moscow and the ITSC, Moscow, with the latter also providing funding.

As the UK's largest university-based space science research group, the UCL Mullard Space Science Laboratory is proud of its record of achievement over the last 40 years. It delivers a cutting-edge science programme, underpinned by a capability in space science instrumentation, systems engineering and project management, and is also committed to a broad outreach programme.