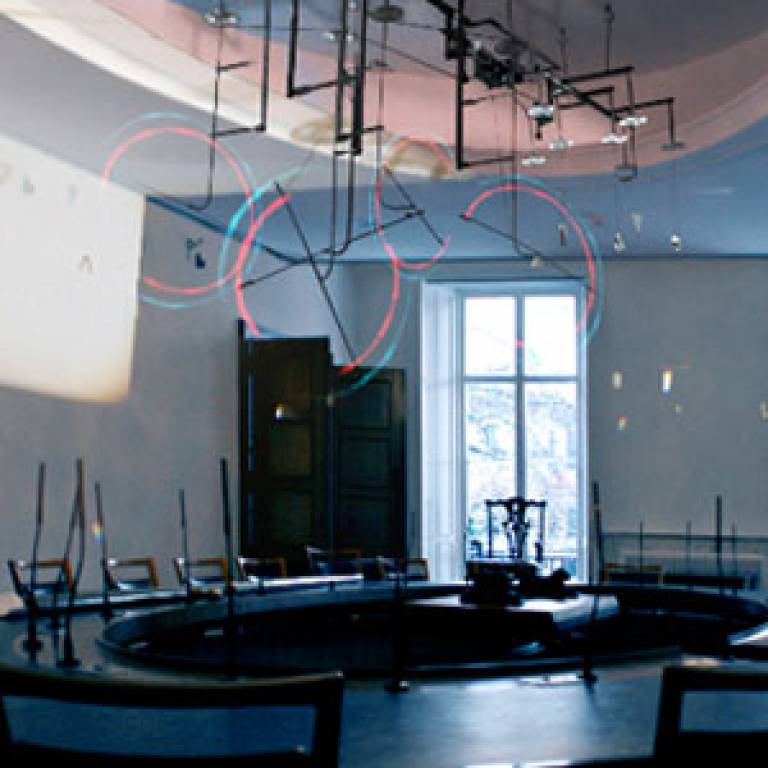 A UCL architecture student has won first prize in a young artist competition for creating a chandelier that depicts the rivalry between scientific visionaries Robert Hooke and Sir Isaac Newton.

Her installation, the fruit of a first-year project, is a chandelier designed for the Council Chamber of the Royal Society, of which Hooke and Newton were members.

Inspired by the pair's antagonistic correspondence regarding theories of light, the chandelier is a two-sided mechanical object, which periodically generates circles of white light from red and blue LEDs - to represent Hooke's ideas - or projects rainbows via a series of rotating prisms - to represent Newton's.

Alicia, 21, whose work will tour Spain and who has also been invited on a solo tour of the country next year, said: "The basis for this installation was the investigation into alchemy and the theories of light and colour at this period in history.

"Hooke's theory said that a combination of different amounts of red and blue originated the rest of the colours. Newton stated that the refraction of white light through a prism caused all the other colours.

"Therefore, the part of the installation that represents Hooke's theory attempts to mix red and blue light, in contrast to Newton's part, which refracts white light through prisms.

"Regarding their relationship, they only had contact with each other through letters and were known to have withheld information regarding their research. Therefore a screen separates both parts of the installation and filters the information.

"Both scientists expressed considerable passion for mechanics throughout their correspondence. This is the reason why the installation consists of a pulley system and both parts are connected by a clock spring.

She cited contemporary artist James Turrell and architect Steven Holl, both of whose work involves the manipulation of light and space, as major influences on her work.

Image: A modified photograph showing how Alicia González-Lafita's chandelier would look in the Council Chamber of the Royal Society.