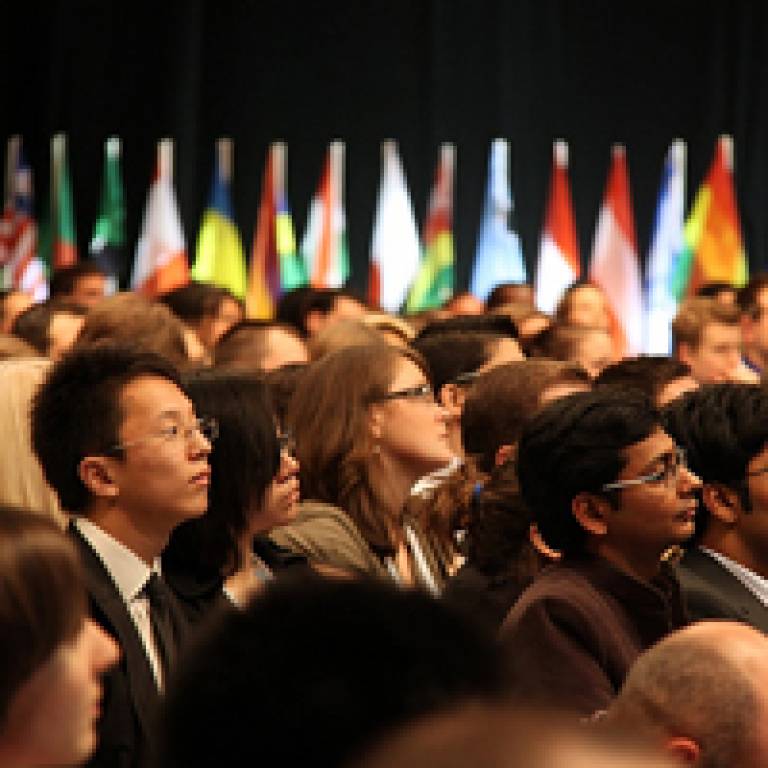 This month One Young World brought together 1000 young leaders from 192 countries across the world for a leadership summit in London to address major global challenges.

The young people who attended the summit were selected based on their leadership potential and their engagement in social change and included UCL's Dominic Baliszewski, a masters student at the UCL Institute of Child Health.

Subjects discussed ranged from global health and interfaith dialogue to the environment and the media. The debates were supported by counsellors including Desmond Tutu, activist and Nobel Peace Prize Laureate; Bob Geldof, musician and activist; and Kofi Annan, President of the Global Humanitarian Forum. The aim was to generate resolutions for a better future and in so doing to develop and link up a global network of alumni.

Here Dominic Baliszewski gives us his personal take on the three-day event.

When I first heard about One Young World (OYW) my inner cynic certainly let itself be heard. The idea: over 500 hundred young people from around the world getting together to tackle the world's issues made possible by the donations of numerous corporate entities. As a Global Health masters student I was invited by my department to apply for a space the week before the event and by Friday I received confirmation. Halfway into the seminar I realised what an opportunity the summit truly was.

Monday evening, day one, saw the delegates (that's the young people) get together for the first time to attend the opening ceremony. The setting: Old Billingsgate Market overlooking the Thames. Amongst a sea of cameras, security and reporters the proceedings began. About 90 seconds into Archbishop Desmond Tutu's speech, I realise how in awe of the man I am. Also gracing the stage that evening were Bob Geldof, Boris Johnson and the two people who made OYW possible, David Jones, Global CEO of Havis Worldwide and Euro RSCG and Kate Robertson, Chairman of Euro RSCG. Each gave a five-minute speech about why they believed in OYW and what they saw as the possibilities. Monday's formalities were concluded by a performance from Corinne Bailey Rae, and soon everyone was filtering off for supper and then to get the coaches back to the hotels.

After successfully dragging myself out of bed by 6:30am, which is a huge achievement in itself, I arrived at the ExCel centre and began mingling (or 'networking' as the timetable had scheduled). The first thing that struck me was the diversity and the impressive résumés of everyone with whom I spoke.

Speakers on the first day included the likes of Kofi Annan, Professor Junis (whom I greatly admire), and HRH Prince Haakon of Norway. The four plenary discussions were on the environment, global business and interfaith dialogue. During each plenary, six chosen delegates gave a five-minute speech about what they saw as the important issues. Questions were asked, and the gathered masses voted on several, somewhat general, resolutions.

This process was repeated on the third and final day until mid-afternoon when regular proceedings ceased to make way for BBC radio crews to set up their equipment. That afternoon's discussion, about whether making profit was at odds with doing good in the world, was broadcast live to 60 million people on BBC World's Have Your Say. I am proud to say that I did indeed have my, admittedly brief, say.

Overall the summit was hugely enjoyable. Granted, the mornings were early, the resolutions were general and lacking in any concrete numbers and I had to bear this all as one of the few without a picture on my ID badge. However, this did not detract from the main reason for the summit. The idea was to get hundreds of international young minds together to meet, discuss and brainstorm, and that is exactly what they did. Now, five days later, there are numerous groups and societies that have been formed, including one that I co-founded (www.oneyoungword.com) and the delegates are beginning to get together to do what they can to try and make the world a slightly better place.'

Image above: Young people at the One World Summit in London Credit: One Young World

Highlights from the event can be viewed via the YouTube film below (10 mins). The event footage begins approximately 3 mins into the film.

The UCL Institute of Child Health (ICH) is one of the world's pioneering paediatric research centres and represents the largest concentration of people dedicated to advancing paediatrics outside the US. ICH works in partnership with Great Ormond Street Hospital for Children. Together, they carry out research into the causes of and treatments for childhood illnesses, and help create international standards for other children's hospitals to follow.

Islam Awareness Week: learning from one another