Overlooked element could be part of dream team for quantum computing 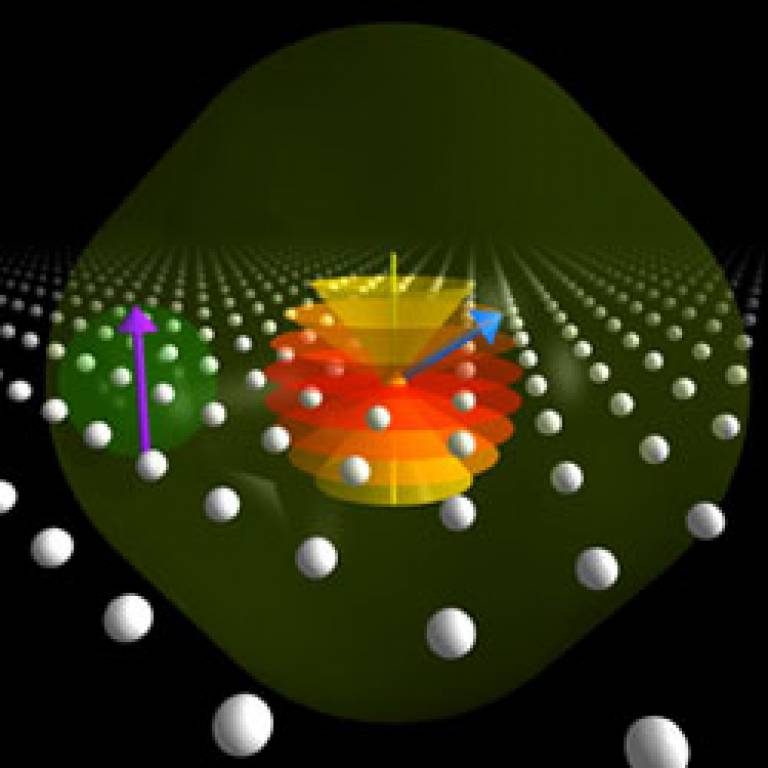 A team of scientists based at the London Centre for Nanotechnology and the National High Magnetic Field Lab (NHMFL) in Florida has discovered a new and more efficient way to encode quantum information within silicon.

Despite being compatible with the silicon chips all around us, the chemical element bismuth has been overlooked to date in favour of phosphorus atoms in the race to quantum technologies. This is because today's microelectronics use phosphorous dissolved in silicon.

However, the researchers have now found that bismuth atoms outperform phosphorus atoms. Bismuth is the heaviest stable atom and has a correspondingly large nuclear 'spin'. Its quantum spin is like a tiny compass needle that can exist in one of ten states corresponding to different tilts (see image below) instead of the two directions available to a phosphorus nucleus. This allows bismuth nuclei to store much more quantum information than phosphorous nuclei.

The research, which is described in the journal Nature Materials and in a forthcoming article in Physical Review Letters, reveals the potential of bismuth atoms for building a quantum computer.

The observations lead to the suggestion of a 'dream team' using both bismuth and phosphorus atoms in silicon. As they are different, they can be manipulated independently. Bismuth would store quantum information while phosphorus controls the information flow.

Lead author Dr Gavin Morley of the London Centre for Nanotechnology said: "The experimental hurdles we've overcome in our research include using bismuth in silicon for the preparation, control and storage of quantum information. In this case bigger is better because the larger nucleus of bismuth provides more room for storing quantum information."

Co-author Marshall Stoneham said: "If a quantum computer could be built, it could solve some problems that have long been regarded as impossible. Having one type of atom for storing quantum information in silicon, and another type for controlling it is like bringing a second person into a one-man conversation: much more interesting!"

To find out more go to the links at the top of this article.

Image above: A bismuth atom in one slice of a silicon crystal. The large light green cloud shows the possible positions of the bound electron's wave function, and the purple arrow is its spin. The bismuth nuclear spin (blue arrow) can tilt in ten different directions, shown in red and yellow. Artwork by Manuel Vögtli (LCN).

The London Centre for Nanotechnology is an interdisciplinary joint enterprise between UCL and Imperial College London. In bringing together world-class infrastructure and leading nanotechnology research activities, the Centre has the critical mass to compete with the best facilities worldwide. Research programmes are aligned to three key areas, namely Planet Care, Healthcare and Information Technology and exploit core competencies in the biomedical, physical and engineering sciences.

The National High Magnetic Field Laboratory develops and operates state-of-the-art, high-magnetic-field facilities that faculty and visiting scientists and engineers use for research. The laboratory is sponsored by the National Science Foundation and the state of Florida.