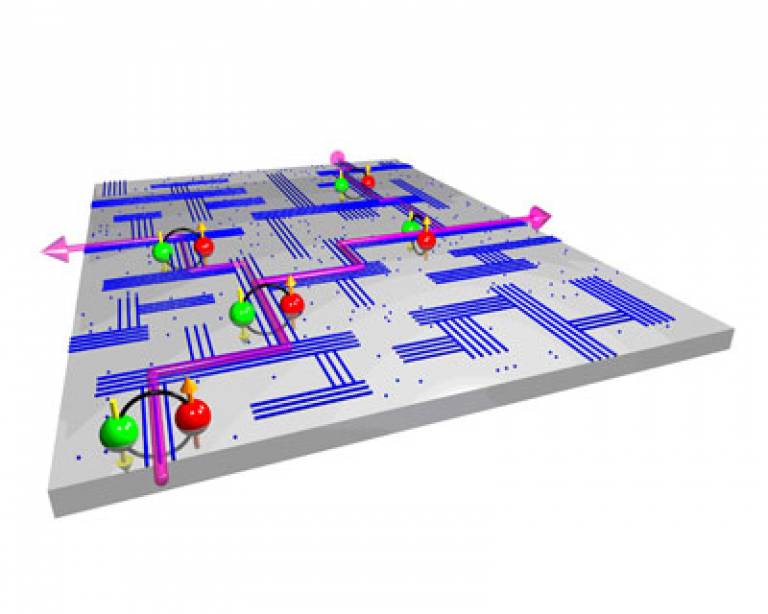 Superconductivity, where a material conducts electricity at very low temperature with no resistance, and therefore transmission wastes virtually no energy, has applications ranging from medical scanners to maglev trains.

Until now, scientists have focused on atomic-scale phenomena to explain this mysterious property of some special compounds.

But in this week's Nature, UCL researchers from the London Centre for Nanotechnology, working with collaborators in Rome and Grenoble, report that the strength of the superconductivity - its ability to persist as temperature is increased- correlates in certain oxide materials with structures visible over a range of length scales. Intriguingly, these structures extend almost to the millimetre scale, and have a "fractal" nature, similar to the intricate patterns in a snowflake.

Since the discovery of superconductivity at the beginning of the last century, there has been a constant quest for improved performance in the form of higher operating temperatures and capacity to carry electrical power. A major breakthrough occurred in 1987 when two scientists from IBM discovered that oxides of copper, previously thought to be most unlikely candidates for superconductivity, superconduct at unprecedentedly high temperatures.

Since then, this class of materials continues to hold the record for operating temperatures, well above the boiling temperature of inexpensive liquid nitrogen. At the same time, though, there is no agreement as to the mechanism underlying this high performance, even though a clear understanding would be extremely beneficial for engineers.

Until now, scientists have focused on structure at the nanometer (0.0000001 millimetres) - the distance between neighbouring atoms - scale as the determinant of the unusually strong superconductivity of the oxides of copper. For this week's Nature article, the researchers used the new technique of X-ray microscopy to examine a copper oxide superconductor whose internal structure could be changed via simple heat treatments - an approach employed by ceramicists over millennia to modify oxide materials.

The team discovered that the best superconductivity was obtained when the microstructure was most 'connected', meaning that it is possible to trace a path with the same nanostructure (exhibited by oxygen atoms) over a large distance. The microstructure in this case was 'fractal': if we were to zoom in on the material's structure at increasing levels of magnification, its appearance would remain the same.

Co-author Antonio Bianconi of the University Rome noted that "We are very excited by our results because they show that fractals, which are ubiquitous in both the biological sciences and the social sciences where they are even used to contemplate the behaviour of financial markets, now appear to have a significant impact on a fundamental property of inorganic matter, its superconductivity."

Co-author Professor Gabriel Aeppli, London Centre for Nanotechnology, added that "While there is no detailed theoretical explanation for what we have discovered yet, it demonstrates that classical ceramic engineering - with visible effects at near millimetre scales - can collude with quantum physics to produce the best superconductors."

Image: Heat treatment improves the superconductivity of a ceramic copper oxide by creating a fractal network of connected channels of ordered oxygen defects. The green and red spheres represent the paired electrons responsible for superconductivity. Artwork by Manuel Vogtli (LCN).

About the London Centre for Nanotechnology:

The London Centre for Nanotechnology is an interdisciplinary joint enterprise between University College London and Imperial College London. In bringing together world-class infrastructure and leading nanotechnology research activities, the Centre has the critical mass to compete with the best facilities world-wide. Research programmes are aligned to three key areas, namely Planet Care, Healthcare and Information Technology and exploit core competencies in the biomedical, physical and engineering sciences.