Formal opening of the UCL School of Energy and Resources, Australia 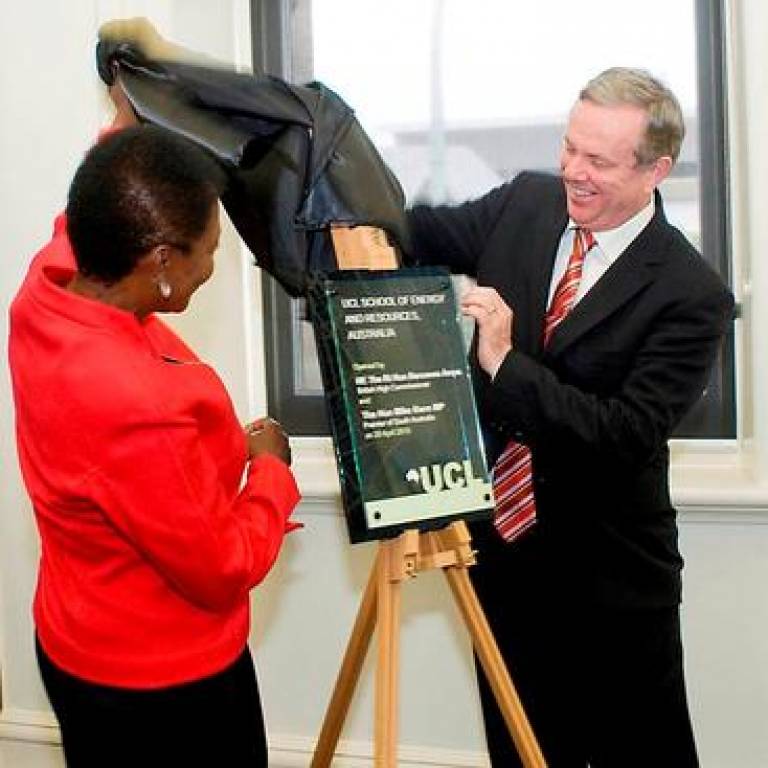 The UCL School of Energy and Resources, in Adelaide, Australia, was formally opened on 28 April.

Professor Tony Owen, Campus Director and Santos Chair of Energy Resources, said: "Our energy policy issues in this country are dominated, directly and indirectly, by major concerns about the environmental degradation arising from widespread combustion of fossil carbon intensive fuels.

"While this is by no means an issue peculiar to the current century, nevertheless the degree of complexity associated with the issues, impacts, and potential solutions, has highlighted the requirement for a rigorous, multidisciplinary, visionary, approach.

"We must take responsibility now for ensuring that the next generation of decision-makers can tackle - with conviction - the decisions that need to be made on these issues.

"To successfully pass such a baton of confidence requires that corporate management should now be encompassing energy and sustainability issues in their own current decision making to ensure the social integrity of their operations.

"This sets the example to follow and universities, by their very nature, are ideally placed to facilitate this generational change - and should be doing so."

As Foundation Partner, Santos is providing $10 million over five years to help establish the UCL School of Energy and Resources, Australia, including scholarships, academic research, a leadership development program, the establishment of the International Energy Policy Institute, and the professorial chair held by Professor Owen.

Santos CEO David Knox said, "UCL's academic excellence on issues of carbon and energy is attuned to the skills we need in Australia as we face the dual challenges of energy security and transitioning to a carbon-constrained economy.

"Bringing an institution such as UCL into Adelaide is more than just a nice thing to do, it's incredibly practical if we're to address these long-term issues."

The opening was followed by the inaugural meeting of the UCL Advisory Board in Australia - a collective of some of the Australasia's most influential energy operators.

To watch a video of the opening ceremony, follow the link at the top of the article.

UCL SERAus, the university's first overseas campus, is the outcome of a partnership agreement between UCL, the Government of South Australia, and Santos Limited, one of Australia's largest energy companies.
It will provide a range of programmes, designed for both new graduates and established professionals, to address areas of skill shortage identified by industry and government. It will also provide scientists and engineers with management skills through courses designed specifically for the energy sector.