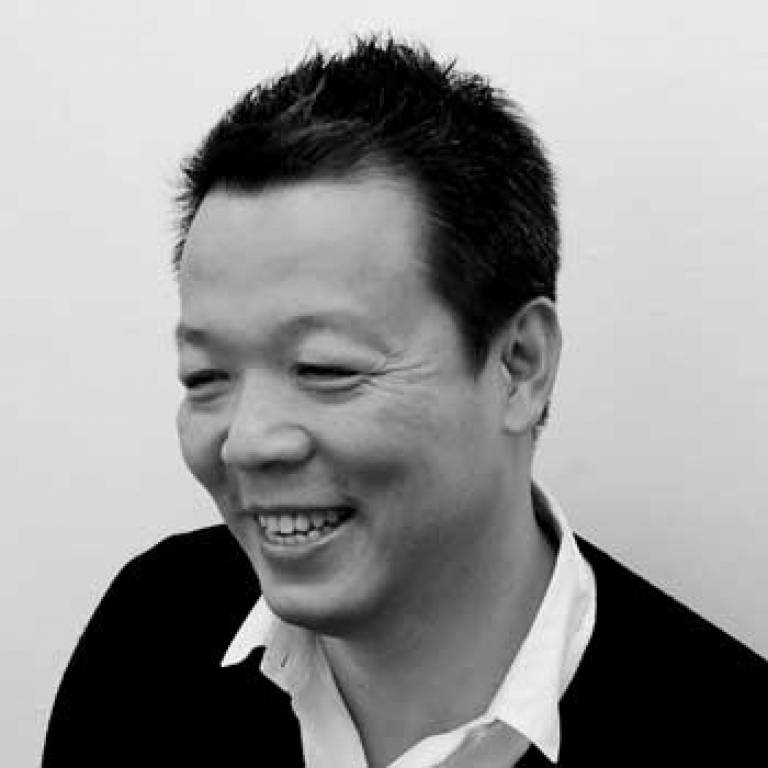 It is easy to understand why CJ Lim, Professor of Architecture and Cultural Design at the Bartlett School of Architecture, has a special insight into the emotions of international students contemplating life at UCL.

Rewind the tape about a quarter of a century and the future Pro-Provost for Canada, Mexico and the USA has just stepped off a plane at Heathrow. He speaks a few words of English; he is 16 years old; he is utterly alone.

The teenager managed to catch the Piccadilly Line into the heart of the city, but disaster struck when he changed trains at Leicester Square.

"I have this vivid memory of standing at the top of the escalators at Leicester Square, so very, very steep. It was the first time I had ever seen or been on an escalator, and my luggage was so large and heavy that I tumbled down the stairs."

Tumbling down a flight of stairs is an apt metaphor for the tumult of new experiences Professor Lim faced as he entered an alien world. The world he had left behind extended no further than the limits of a small Malaysian village stalked by chickens and surrounded by orchards.

"Twenty-five years ago Malaysia was not the life and soul of the world. To live in a village was even worse. It was very quiet. We had a cinema every other weekend, no television. I wanted to find out what lay beyond my little world. Coming to England was about learning the language, the culture. You have to remember that Malaysia was a colony for a long time and there's still a lot of British influences. I think we were very proud of what our British rulers left the country. For me to come here felt fairly natural in some ways."

He compares the transition to 'Alice falling down the rabbit hole' and emerging in Wonderland, and Lewis Carroll's seminal story is a recurring theme of Professor Lim's life and work, appearing in his books, designs and installations.

After gathering his scattered belongings at the foot of that escalator, he made his way to an overland station and caught a train to Harrogate, Yorkshire, where he would study at boarding school for the following two years.

His lack of language skills barred him from taking humanities subjects, so he focused on chemistry, physics and maths, all of which he 'was never very good at', as well as art, which was already something of a passion.

His father hoped this exotic education would lead to a solid career as a doctor, a lawyer or an accountant, but Professor Lim, who enlarged his vocabulary by avidly watching classic films from Hollywood's golden age, had other ideas.

"My ambition at that time was to do something connected to fine arts rather than become an architect. I loved drawing, the poetics of art, the stories behind creations. I'm fascinated by that. But when I applied to university I wasn't allowed to take fine arts. My father said 'if you do arts, you'll starve'."

Professor Lim found a compromise - a course at the Architectural Association (AA) in Bedford Square, London, which offered an avant-garde, art-based approach to the discipline. He secured a place, but things didn't go according to plan.

"I was a terrible student. Absolutely terrible! I think this is why I have a very good understanding of some international students, especially from the Far East. Back home, we had textbooks to memorise. We had to follow the rules. You shouldn't have any opinions of your own. That was only the beginning of these rather stiff and prehistoric rules of learning back home."

In other words, the antithesis of life at the AA, where Peter Cook, who would become chair of the Bartlett, and Christine Hawley, the same school's future dean, presided over a community of free thinkers, including Zaha Hadid, the visionary behind the 2012 London Olympics' aquatics centre.

"I wanted to ask my tutors everything. Do I agree with this book? Do I do it this way? Do I draw in red? In black? But architecture is not like that. Good cutting-edge architectural schools, especially at the Bartlett now, guide you and advise you but they don't really teach you. They help you become an independent thinker. They nudge you to make your own decisions from the word go."

Professor Lim continued to struggle at the AA, failing his second year and facing the prospect of being kicked off his course. He resat his exam, passing at the second attempt. He insists it was a valuable lesson.

"If you fail at something it doesn't mean you'll be gone forever from the subject. That experience forced me to change the way I understand architecture and be much more open-minded about what education had to offer, rather than doggedly following a textbook. I think that's what I try to instil in my students at the Bartlett."

In his final undergraduate year at the AA, Professor Lim studied a single building - French architect Pierre Chareau's Maison de Verre, a delicate dream of steel and glass hidden in the heart of Paris - under the direction of tutor Peter Salter.

That intense focus led to a moment of epiphany, a mental breakthrough that deepened his understanding of tectonics, the physical elements that make and describe a space.

He graduated in 1987 and won the Building Design Trust Housing Competition a year later - the first of a long sequence of awards, shortlistings and commendations that continues to this day.

But in the infancy of his teaching career, he had to flourish in unlikely surroundings - the University of East London. Hawley hired him to take a remedial class of a dozen students whom others had shunned.

"Nobody wanted to teach them. The East End was not the most glamorous place on Earth. But I was given that task, so I supported them as best I could and somehow they all managed to pass their course."

Professor Lim's against-the-odds success did not go unnoticed and Hawley invited him to follow when she became a professor at the Bartlett, where the pair established a teaching partnership that would last a staggering 15 years.

The Bartlett was also where he met fellow tutor Matthew Wells, with whom the professor has collaborated on over 100 projects ranging from cultural centres to public landmarks and residential developments.

The Victoria and Albert Museum, the Arts Council England and the Aga Khan Foundation were responsible for some of their commissions. Other high-profile projects originated in the Far East, including drawing up masterplans for sustainable cities for the Chinese and Korean governments.

Somewhat surprisingly, Professor Lim says his biggest influence is not a fellow architect but Heath Robinson, the early 20th century cartoonist and illustrator whose drawings of eccentric machines became so famous his name entered the lexicon as an epithet for any complex and implausible contraption.

"If you look at his drawings even now they are incredibly innovative, full of wit and bravery. Despite living through the First and Second World Wars, he envisaged a very positive world. I like that attitude. It was not about money and blame. He was mad, but wonderful - my Mad Hatter."

Professor Lim finds cities more interesting than buildings. Cities, he believes, should be compact - an idea that informs his recent work on the sustainability of urban space. Most research focuses on ways to reduce energy consumption, carbon emissions and pollution. But Professor Lim's work has a different starting point - how the production of food could be the glue to bind the disparate elements of a city together.

"We all want to know what the future city is, but no one has quite the right answer. We took on board all the manifestos and design principles of sustainable cities and said, no, perhaps some of the things that have been neglected are more important. Social and cultural sustainability have been top of my list. I think the production of food is a key. Food is a common language that you, I or anyone from a different country understands and appreciates, whereas lectures on energy use and the like feel rather patronising."

In his most recent book - Smartcities + Ecowarriors - he envisages a future where urban agriculture is a commonplace of city life, freeing up the outer suburbs for the cultivation of biomass to satisfy the populace's energy needs. The ideas that inform the book began with a proposal to revitalise the community landscape of Chicago's DuSable Park and matured with Guangming Smartcity, a new town in Southern China for 200,000 inhabitants.

Professor Lim said the Chinese government is receptive to new ideas but faces a difficult dilemma - how do they encourage a nation finally emerging from its agrarian past to eschew the material comforts the West has long enjoyed in favour of farming once again, albeit in a different context?

Our own government, for its part, faces an even more formidable task as it attempts to haul the UK into the 21st century. Upgrading our ageing housing stock is not only expensive; it is also a long-term project for a country that has, Professor Lim contends, a history of opting for short-sighted solutions to architectural problems.

"I think that's a strange mindset of the British public about architecture, spending money on the built environment, and the future of living. Most of our greatest architects work outside the UK. Take Hadid, for example, who is probably the biggest star on the planet right now. She has the aquatics centre in the pipeline, but she hasn't got a building in London yet. Most of them are in Europe, America and Asia. Why is that? I'm sure Norman Foster and Richard Rogers have built more buildings outside the UK than within it."

Professor Lim has won numerous competitions in this country, but has yet to see any of his radical ideas take shape in concrete, glass and steel on British soil - a state of affairs he admits is 'frustrating to an extent'. But research has its own rewards.

"It's great to have something physically built, but the research has many different things to say. My ideas get listened to by government agencies, by other academics and by students. If I can change one other person's way of thinking about the built environment in my entire career, I think I would have done an okay job."

British architectural education began at UCL in 1841, and since then the UCL Bartlett School of Architecture has been at the forefront of the international architectural debate. Last year the Architects' Journal judged the Bartlett as the best school in the UK - for the sixth consecutive year.