The authenticity of Hawaiian feasting 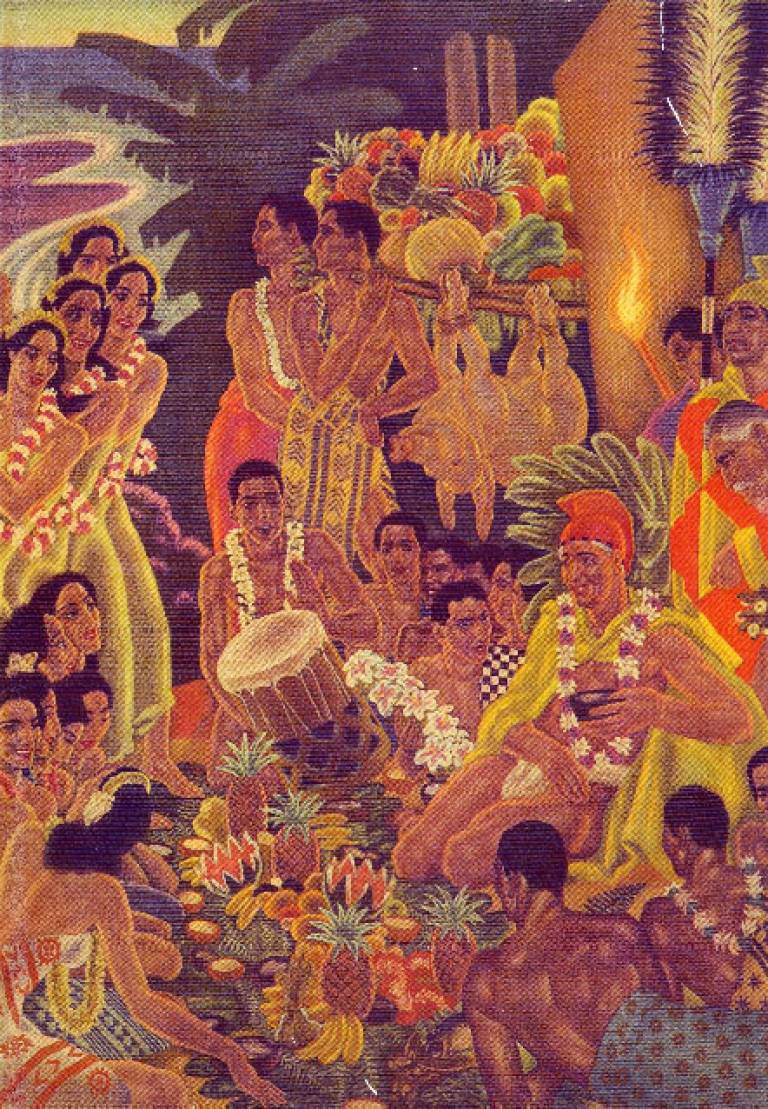 ucl.ac.uk/anthropology/people/research_staff/k_oconnor" target="_self">Dr Kaori O'Connor of UCL Anthropology has won the international 2009 Sophie Coe Prize in Food History for her paper 'The Hawaiian Luau: Food As Tradition, Transgression, Transformation and Travel'.

In the paper, described as "a superb piece of scholarship" by the judges and published in the journal Food, Culture & Society, Dr O'Connor lays bare the religious, social and political history of the feast to explain why its present-day pineapple-and-pork image is a far cry from the original ritual. An extract is published below.

Nurtured by travel writing, tourist art and Hollywood films (Reyes 1995), no repast is as exotic and yet apparently familiar as the Hawaiian luau. Lodged in the popular imagination as the embodiment of Polynesian hospitality rooted in antiquity, it represents for many the essence of "traditional" island life. Figure 1 shows the luau portrayed in 'Island Feast' a consummate example of high tourist art painted by Eugene Savage. Dating from the late 1930s, it was commissioned by the Matson Navigation Company, owner of the iconic white cruise liners that sailed between Hawaii and California in the days before airline travel (Krantz, Krantz and Fobian 2001). Used as a decorative menu cover, one of a set of six with a different design for each day of the crossing, the menus introduced elite tourists to highly romanticized versions of Hawaiian culture, customs and history (Brown 1982). Printed on the back of 'Island Feast' is an explanatory note that makes explicit many beliefs about the luau that are still current, and can be considered the standard popular view of the "real" luau of old:

"Ancient Hawaiians were lusty trenchermen. All events of importance called for a feast. Births, marriages, weanings, even tax-gathering …every high point in their life was signalled by a luau. The celebrations were marked by abject attention to every whim of the king or chief who might be present, by music and dancing, by idols to keep the gods in mind, and above all by a plenitude of food. A luau such as the artist has depicted had to begin long before the feast was actually served. The main dish was generally roast pig barbecued in a pit or imu by the heat from lava rocks that had been heated in a fire. Fish, yams, breadfruit and other delicacies had to be wrapped in ti-leaves and also cooked in the imu. Flower leis had to be woven and baskets of various fruits gathered. The preparation took hours. But they were regarded as part of the fun which ran on merrily from beginning to end. Food was served without stint. Whether the host was king or commoner, no one was ever known to leave a luau still hungry." (Matson 1938)

When luaus are mentioned in the current academic literature, they usually appear in tourism studies as a metaphor for "fake." Following MacCannell (1973, 1976), these studies cast contemporary mass tourist experiences in Hawaii, such as choreographed hula dancing performances or commercial luaus in which the pig is cooked in a hotel catering kitchen, not in a pit, and western or oriental foods are mixed with Hawaiian ones, as "staged" and inauthentic events (Balme 1998; Desmond 1997, 1999; Hammond 2001). The underlying implication is that while those of the present are ersatz, "traditional" luaus along the lines of Island Feast were "the real thing," the "genuine article." But were they? And if not, why do we persist in believing that they were? Tourist studies are primarily concerned with the experiences of the tourist over the short duration of a holiday, which between January and May 2007 was an average of 8.71 days in Hawaii for visitors from all parts of the world (Liu 2007). By contrast, anthropologists are concerned with the natives of a place, over a long period of time. From this perspective, the tourist experience looks very different - particularly culinary tourism. […]

In Hawaii, "traditional" is taken to mean the period before first contact with the West (Linnekin 1983), the time ostensibly shown in Island Feast, which ended with the arrival of Captain James Cook in 1778. In almost every regard, Savage's depiction of the traditional luau and its accompanying text are historically inaccurate. The sarong, in which all Savage's women are dressed, was invented in Hollywood in 1936 by Edith Head of Paramount Studios for Dorothy Lamour to wear in the film The Jungle Princess. The pineapple, which figures prominently and is now considered emblematic of Hawaii, is not indigenous to the islands. Indeed, the bounteous harvest of tropical fruits shown - watermelons, limes, mangos, guavas, papayas, oranges, and many more - are all plants that were brought to the islands after first western contact. A highly esteemed pre-contact delicacy -small edible dogs, baked in an earth oven - has been omitted. But these are immaterial compared to more fundamental misapprehensions about the nature of Hawaiian feasting. Before modern tourist luaus and the social changes of the nineteenth century, Hawaiian eating and feasting were part of a culinary culture linked to a religion devoted to increasing and harnessing the power or mana of the gods through food.

Nothing, as Kirch (2001: 168) observes, "is more visually evocative of a 'classic' Polynesian scene than a feast." In the rest of Polynesia, there were three kinds of feasts - domestic feasts marking important events in the lives of commoners; chiefly feasts marking similar events in the lives of the nobles; and sacred or religious feasts, linked to the annual ritual cycle (Oliver 1989). In Hawaii, by the time of first western contact, the first kind of feast had virtually disappeared as commoners had little in the way of disposable surplus after supplying produce and other goods to the chiefs and the priests. Chiefly feasts were greatly restricted compared with the public displays and celebrations common in the South Pacific, possibly because of the taboos, whose restrictions were even more complex for nobles than for commoners. Instead, primacy in Hawaii was given to the third kind of feasting - the sacred feasts of the gods - as religion permeated every aspect of food production, provisioning and consumption.

The religion of pre-contact Hawaii was a complex belief system in which virtually all of the material world was seen as animate and imbued with sacred and symbolic qualities (Abbott 1992). Dominating the Hawaiian pantheon were the four great gods of Polynesia - Ku, the god of war; Lono, the god of agriculture and the harvest; Kane, the god of water and of life; and Kanaloa, the god of the sea. As well as existing on the spiritual plane, each of these gods was believed to inhabit natural phenomena such as rainbows, features of the landscape such as stones, and different plants and animals - which were considered sacred to him or to them, because forms could be shared (Handy and Handy 1972). Pigs, the most valued food in Polynesia, were sacred to the gods, as were coconuts, bananas, chickens, and certain choice fish, often red ones, because red was a sacred color (Kamakau 1964; Handy and Pukui 1972; Titcomb 1972). These were the main foods offered in ritual sacrifices in the heiaus or temples dedicated to the four great gods.

Food offerings were literally intended to feed the gods, in order to increase their mana or power. Large Hawaiian god images often had open mouths, as to "eat" or "consume" food, enemies or land was regarded as the natural activity of a god and of a chief (Elbert 1957a). Early artists show that in the temples during Cook's visits, food offerings were placed in the open mouth of images (Joppien and Smith 1988; Hooper 2006). Hawaiian religion has been described as "pragmatic" (Valeri 1985) because it was meant to be efficacious, to produce a particular end. This was not a beseeching practice, in which the gods were humbly begged for their help; the large formal offerings made by chiefs and priests had more the character of a challenge. By feeding the gods with ever-greater quantities of food, and by making increasingly frequent offerings of more and more valuable sacrifices, devotees sought to oblige the gods to maintain the social and natural order, grant victory in battle, and maintain the fertility of land, sea and people. The dedication of a temple to the war god Ku required the sacrifice of 1,400 pigs in addition to a great sacred feast at which many more pigs were consumed, along with other appropriate foods (Malo 1951: 172). These sacred feasts of Hawaii were largely ceremonial, centring on sacrificial foods that were first offered to the gods in the temples, and afterwards eaten there by the nobles and priests, as a form of sacred communion, in which commoners were sometimes allowed to share. The participants were all male; women were not allowed even to enter the temple precincts. […]

In sum, in pre-contact Hawaii, eating was an act of worship, cooking a sacrificial practice, and agriculture, fishing and husbandry forms of religious devotion. The sacred feasts were not social events, but private communions between gods, priests and chiefs. There were also secular feasts, but the separation of the sexes and social classes, along with the restricted access to food among commoners meant that they were not the convivial, lavish and egalitarian festivities of popular imagination. There was nothing like the "traditional" secular luau shown in 'Island Feast' with men and women of different social ranks feasting together on pig and bananas.

Image: 'Island Feast' - tourist art from the 1930s commissioned by the Matson Navigation Company for use on cruise liner menus