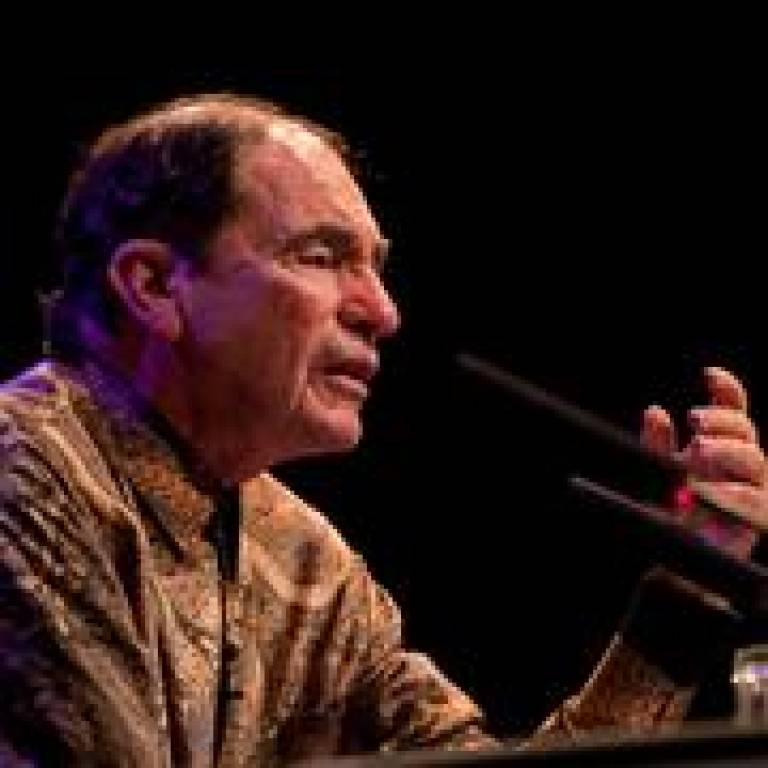 Mr Sachs, who had retired after 15 years as a member of the South African Constitutional Court ten days before the lecture, spoke on the theme 'From refugee to judge of refugee law' to mark the launch of his new book The Strange Alchemy of Life and Law, published by Oxford University Press.

After an introduction by UCL President and Provost Professor Malcolm Grant, Mr Sachs opened his address with his memories of arriving in London, "lying on my back on Hampstead Heath, watching the kites fly, enjoying the sense of peace, away from detention, and not being followed".

Having been detained in solitary confinement and tortured for six months in 1964-65 for his part in the struggle for a democratic South Africa, Mr Sachs said: "There was a sense of elation and happiness at being in the UK, a free country, and yet there was something deeply troubled, deeply damaged inside...To this day I've never got over that absolute loss of dignity and autonomy."

Listen to Albie Sachs discuss his new book, the role of laughter in a democracy, and UCL's new Institute for Human Rights

He went on to describe his studies and research in the UK and Mozambique as a refugee, before the car bomb in which he lost his right arm and the sight in one eye.

He spoke touchingly about his care and rehabilitation at the hands of nurses in the UK, who helped him learn to stand and walk again: "It gave me a totally different relationship to this country - the kindness; there was something in the courtesy, the affection and the daily care."

Mr Sachs discussed what it means to be a refugee (having been one twice), and how, in his view, refugees should be regarded not as pitiable, but as active people who should immerse themselves in learning so that they have something to contribute to their home country when they return.

He finished by discussing his involvement in drafting South Africa's post-apartheid Constitution, and considering how one's life experience affects one's rulings as a judge.

Professor Michael Worton, UCL Vice-Provost (Academic & International) gave a thoughtful vote of thanks, before a lively question and answer session.

The event was the second time Mr Sachs had spoken at UCL; he gave a lecture at the university in 2008 as a celebration of the 75th anniversary of the Council for Assisting Refugee Academics.