'Magnetricity' observed and measured for the first time 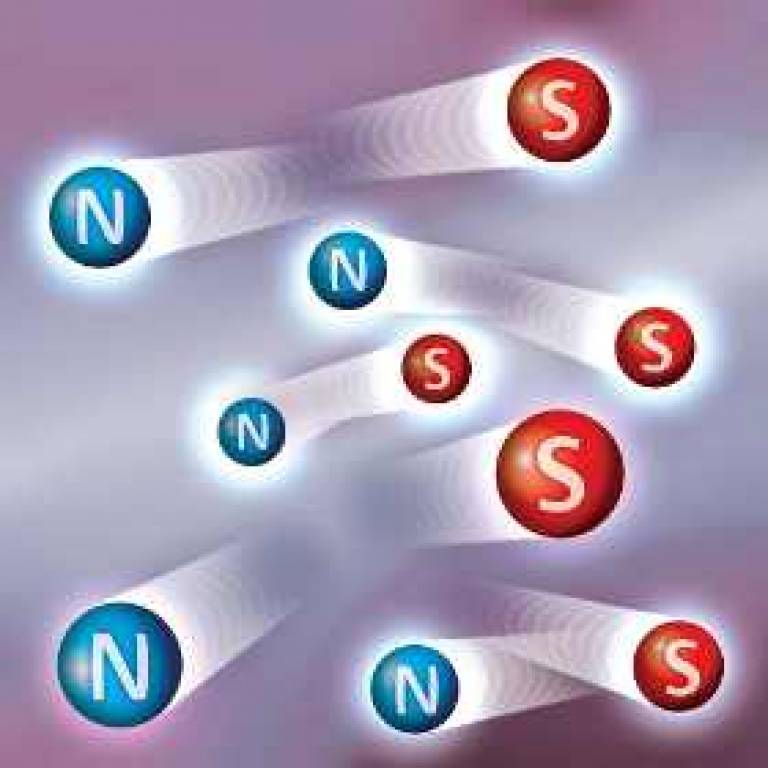 A magnetic charge can behave and interact just like an electric charge in some materials, according to new research led by the London Centre for Nanotechnology (LCN).

The findings could lead to a reassessment of current magnetism theories, as well as significant technological advances.

The research, published today in Nature, proves the existence of atom-sized 'magnetic charges' that behave and interact just like more familiar electric charges. It also demonstrates a perfect symmetry between electricity and magnetism - a phenomenon dubbed 'magnetricity' by the authors from the LCN and the Science and Technology Facility Council's ISIS Neutron and Muon Source.

In order to prove experimentally the existence of magnetic current for the first time, the team mapped Onsager's 1934 theory of the movement of ions in water onto magnetic currents in a material called spin ice. They then tested the theory by applying a magnetic field to a spin ice sample at a very low temperature and observing the process using muons at ISIS.

Professor Steve Bramwell, LCN co-author of the paper, said: "Magnetic monopoles were first predicted to exist in 1931, but despite many searches, they have never yet been observed as freely roaming elementary particles. These monopoles do at least exist within the spin ice sample, but not outside.

"It is not often in the field of physics you get the chance to ask 'How do you measure something?' and then go on to prove a theory unequivocally. This is a very important step to establish that magnetic charge can flow like electric charge. It is in the early stages, but who knows what the applications of magnetricity could be in 100 years time."

Professor Keith Mason, Chief Executive of STFC said: "The unequivocal proof that magnetic charge is conducted in spin ice adds significantly to our understanding of electromagnetism. Whilst we will have to wait to see what applications magnetricity will find in technology, this research shows that curiosity driven research will always have the potential to make an impact on the way we live and work. Advanced materials research depends greatly on having access to central research labs like ISIS allowing the UK science community to flourish and make exciting discoveries like this."

Dr Sean Giblin, instrument scientist at ISIS and co-author of the paper, added: "The results were astounding, using muons at ISIS we are finally able to confirm that magnetic charge really is conducted through certain materials at certain temperatures - just like the way ions conduct electricity in water."

Image: The magnetic equivalent of electricity in a 'spin ice' material: atom sized north and south poles in spin ice drift in opposite directions when a magnetic field is applied. Credit: UCL/LCN

LCN is a multidisciplinary research centre forming the bridge between the physical and biomedical sciences. It brings together two world leaders in nanotechnology, UCL and Imperial College London, in a unique operating model that accesses the combined skills of multiple departments, including medicine, chemistry, physics, electrical and electronic engineering, biochemical engineering, materials and earth sciences, and two leading technology transfer offices.