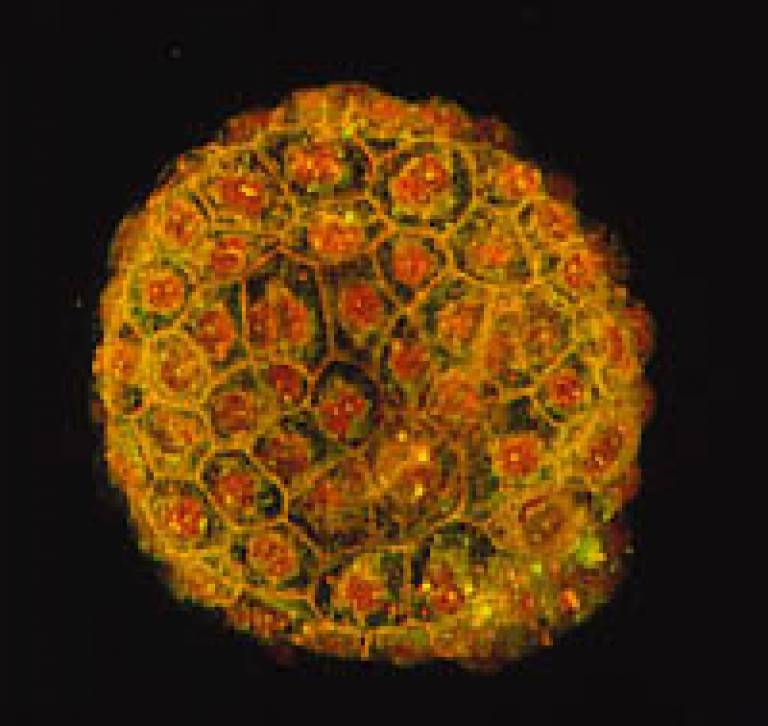 Professor Claudio Stern, Chair of the steering committee for the UCL Centre for Stem Cells and Regenerative Medicine, explains what stem cells are, the benefits they bring to medical research and UCL's strengths in this area.

"Stem cells are unique cells that have the ability to renew themselves almost indefinitely. Some of them can also give rise to almost any cell type: a brain neuron, a muscle cell, a blood cell or perhaps bone. Cells with these properties can be isolated from embryos, but a very small number of adult stem cells also exist, embedded in various tissues of the adult body.

"Because of their self-renewing and versatile properties, there is considerable hope that the power of these cells can be harnessed for therapeutic applications, especially for diseases that currently have no cure. For example, Parkinson's disease is due to a decrease in dopamine production in particular areas of the brain. Although Parkinson's patients can improve if given dopamine by mouth, this can never replicate the subtle variations in the dopamine level of the normal body, so the disease continues to progress and the patient becomes resistant to the medication. To provide a cure, it will be necessary to replace the cells that normally produce dopamine in the correct area of the brain, which cannot repair itself.

"There is considerable effort in many laboratories around the world to learn to isolate and grow cells with these properties, which could eventually be used to treat Parkinson's and many other diseases. It is also hoped that one day it might be possible to generate whole organs outside the body for transplantation, to cure diseases such as diabetes, heart disease and many others. But this is a long way away. We still don't know how to harness the power of these unique cells, which also have a tendency to form tumours.

"Probably the best source of stem cells is the very young embryo, at a stage before any of its organs start to form. These cells have not degraded by ageing, have the greatest capacity to generate all types of cells, and can be propagated much more easily than adult stem cells. But many people have strong ethical objections to the use of early embryos for this purpose, and in some countries, notably the USA under the Bush administration, the generation of new lines of human embryonic stem cells and the use of Federal funding to research into all but a small number of established cell lines was banned.

"The new government of Barack Obama yesterday announced its intention to reverse the ban. The UK had been benefiting greatly from both the American ban on embryonic stem cell research and from the high quality of its basic and clinical research. Many good scientists had left the US under the Bush administration and may now choose to return, as opportunities to work in this area are re-opened.

"To prevent this from happening it will be essential for the UK to maintain and even to increase its level of funding of basic and clinical science related to stem cells, tissue engineering and regenerative medicine including the underlying cell and developmental biology that will allow us to understand how to control the cells' abilities to divide, to form the desired organs and to prevent them from becoming cancerous."UCL has many scientists working on these areas, but until very recently they were working in relative isolation from each other. For this reason, UCL launched a new initiative: the UCL Centre for Stem Cells and Regenerative Medicine. It started by compilation of a list of researchers, which revealed a surprisingly large set of more than 100 groups.

"To start to enhance communication, a website was put in place summarising the current research projects, infrastructure, seminars and other activities. Quickly stem cell scientists across UCL started to discover each other and to communicate.

"The formal launch of the new Centre is planned for Friday 24 April, with a mini-symposium including UCL and outside speakers. UCL's greatest strength in this area has traditionally been in its basic research, now increasingly moving in a translational direction - that is, towards shaping these research discoveries into potential new treatments or diagnostic tests."The enhanced communication provided by the new Centre will greatly facilitate the bi-directional flow of information between basic and clinical scientists that is absolutely crucial for this field to move forward. It will also provide an opportunity to engage physical scientists, chemists, mathematicians, engineers and materials scientists alongside lawyers, ethicists and many others across almost all disciplines at UCL that have so much to contribute to this rapidly advancing field."

Professor Claudio D Stern, Head of UCL Cell and Developmental Biology and Chair of the steering committee for the UCL Centre for Stem Cells and Regenerative Medicine

The UCL Centre for Stem Cells and Regenerative Medicine brings together researchers from several faculties, specialised hospitals and institutes across UCL including the MRC National Institute for Medical Research (NIMR), with a common interest in all aspects of stem cells, tissue engineering, repair and regeneration and the development of their therapeutic and biotechnological potential.

This research is highly multi-disciplinary and increasingly incorporates ideas and technologies beyond the Life and Medical Sciences including Engineering, Nanotechnology, Mathematics and the Physical Sciences, Computing, Bioinformatics and Chemistry. A strong emphasis is placed on the development of educational activities. The centre also addresses the societal implications and the socioeconomic impact of this innovative research as well as biomedical ethics and legal issues.