Tomas Venclova at UCL: on poetry, dissidence and the Berlin Wall 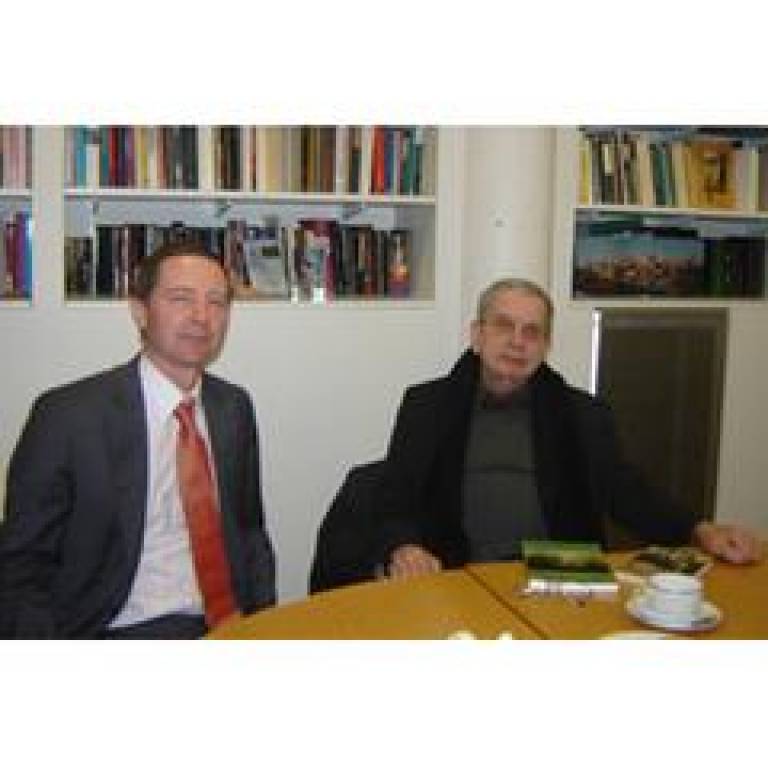 Tomas Venclova, one of Europe's most eminent poets, visited UCL on 24 March to take part in a discussion with Dr Robin Aizlewood, Director of the UCL School of Slavonic and East European Studies (SSEES).

Venclova was one of the trio of poets including Nobel Prize Winners Joseph Brodsky and Czeslaw Milosz who were close friends, interlocutors and translators of each other's poetry.

Venclova spoke with elegance, wit and insight, drawing on his personal experience and on his poetry as a "witness to its time". Venclova was one of the five founding members of the Lithuanian Helsinki Group, and was forced to emigrate from the Soviet Union in 1977.  He was stripped of his Soviet citizenship, joining some 40 people to receive this "honour", as he put it, starting with Trotsky and later including - amongst others - Aleksandr Solzhenitsyn and Mstislav Rostropovich.

Venclova spoke about Lithuania and Europe today, and also about the city of Vilnius.  His third and new book on Vilnius, Vilnius Personalities, is essayist in approach and has its origins, in part, in the conversations he once had with Susan Sontag.

The discussion began with a reading in English by his translator, Ellen Hinsey, of a poem on the Berlin Wall and ended with an inspiring recital in Lithuanian by Venclova himself.

Dr Aizlewood commented: "It was an honour to take part in this discussion with Tomas Venclova. This is one of a number of events organised by SSEES this year on the twentieth anniversary of the end of the Iron Curtain in Europe."

The event was organised by UCL SSEES in co-operation with the British-Lithuanian Society.

UCL Context
The UCL School of Slavonic and East European Studies is one of the world's leading specialist institutions, and the largest national centre in the UK, for the study of Central, Eastern and South-East Europe and Russia. More than 60 academic staff work at UCL SSEES, teaching and conducting research in the history, economics, politics, sociology, anthropology, culture, literature and languages of the countries of the region.