UCOpera (UCO) relishes a challenge. Their current production of Ernest Bloch's Macbeth at the UCL Bloomsbury Theatre - the British première of the opera - is no exception. 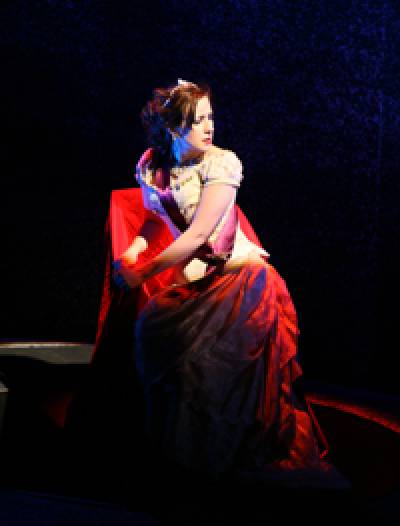 A minor classical masterpiece of the early twentieth century, Bloch's work was written while the composer was in his twenties and first played at the Opéra Comique in Paris in 1910, accompanied by rumours of bitter rivalries among the cast. There were no further productions until 1938, when it was revived in Naples but subsequently banned by Mussolini. It was only after World War II that the emergence of the neglected opera was possible in Europe.

How, then, to carve out an interpretation from patchy documentation and no clear precedent? UCO has boldly opted for minimal stage design, acknowledging that the emotions and tensions of the story itself are costume enough.

In their production, Shakespeare's tragedy unfurls on the stage against a livid sky, in turn malign and sombre. The use of lighting brings the bare landscape to life, so that the fitful emotions of music are tightly bound with colour.

Macbeth (played by  George von Bergen) and Lady Macbeth (Katherine Rohrer) are an intense and brooding couple. They command - and demand - the attention of the audience, whether bickering or embracing tenderly. The rest of the cast supports them well: Macduff (Carl Gombrich), in particular, leads one of the closing scenes with mastery. The three witches are an unpleasant trio, which is a testament in particular to effective choreography. 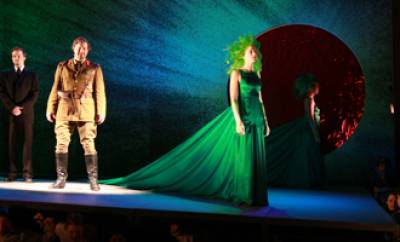 The star of the night, however, is Ernest Bloch. Conductor Charles Peebles said of the music: "Every chord is brilliantly calculated and there is a polish about the whole opera that is amazing. Every time you turn a page you are confronted with an astonishing command and confidence. When all is gathered up, Macbeth's absence from the operatic schedules of the world opera houses is more surprising than most. The title role has to be one of music's great baritone parts - Macbeth was never going to be a tenor! It is always dramatic and atmospheric, ranging from scenes of huge spectacle to shadowy pockets of hushed and stifled murmurings."

This semi-professional production is expertly designed and choreographed, and its interpretation of Bloch's opera moves and invites one to revisit Shakesepeare's tragedy.

"UCO has been bringing rarely performed work to the stage for over fifty years, including seventeen British premieres and three world premieres. The impressive scale and calibre of the productions has earned UCOpera a reputation as one of the most exciting platforms for opera in the UK.

"What makes the company all the more remarkable is the fact that it is entirely run by students, with the support of professional members of the production team. UCOpera provides an opportunity for students to be involved in an operatic production to which they are otherwise very unlikely to have access."