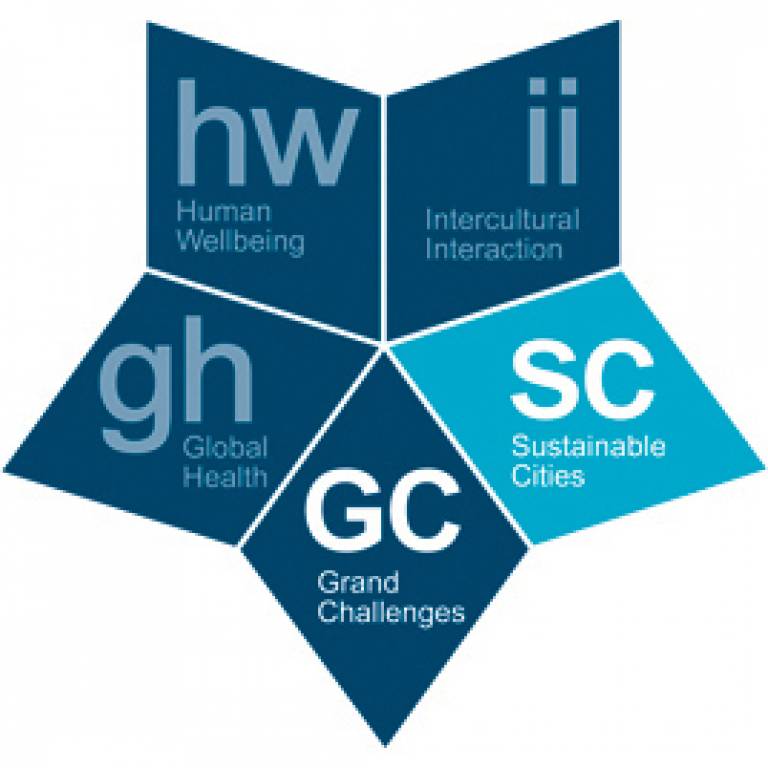 UCL formally launched its Grand Challenge of Sustainable Cities - a programme to rally the university's breadth of expertise in service of urban sustainability - at an evening event on 8 July 2009.

Hundreds of invited guests - including policymakers and practitioners from government bodies and non-governmental organisations, architectural practices and engineering firms - were welcomed by UCL President and Provost Professor Malcolm Grant.

Professor Grant said that by the end of the 21st century some 80% of humanity would live in cities. This rapid growth would further stress the urban environment, posing significant problems in areas such as food security, energy, water, waste, transport, economy, trade, manufacture, wealth creation and quality of life. This evening marked UCL's commitment to deploying the breadth of its expertise - in imaginative, interdisciplinary collaborations and partnerships with policymakers and practitioners - to make our cities fit for purpose.

A panel discussion followed, moderated by Roger Harrabin, BBC Environmental Analyst, with presentations by: Professor Mark Maslin (UCL Geography), Director of the UCL Environment Institute; Professor Raquel Rolnik (University of São Paulo), United Nations Special Rapporteur on the Right to Adequate Housing; Yvonne Rydin (UCL Bartlett School of Planning), Professor of Planning, Environment & Public Policy; and Paul Finch, Programme Director of the World Architecture Festival and Editor Emeritus of 'Architectural Review'.Professor Maslin declared that the battle to deal with climate change will be won or lost in cities, which are responsible for 75% of energy demand. Cities are uniquely vulnerable to the effects of climate change - in particular to sea-level rises and heatwaves - yet the positive news is that mayors are able to act more nimbly and urgently than national governments. He welcomed the practical solutions emerging from the C40 group of leading cities.

Professor Rolnik said that, worldwide, the cities of today are mostly shaped by informal settlement. Real estate markets and territorial-exclusion machinery marginalise the poor, pushing them toward perilous, hazard-prone settlements, far from the healthcare, and educational, cultural and employment opportunities they need. Horizontal expansion of cities necessitate more travel, further degrading the environment. Most public-housing policies are mechanisms for containment of the poor.

Professor Rydin asserted that - with the right kinds of governance - cities can be the key to sustainable development. We should focus on those institutions that influence behaviour, rather than relying solely on technological intervention. Crucial factors would be the sharing of experience, and learning through experimentation, as part of transparent and accountable governance.

Mr Finch described the many appealing aspects of urban life. He decried the trend for 'gling' (green bling) such as add-on wind turbines, and said that achieving the right combination of aesthetics, functionality and sustainability in our cities would require 'design intelligence'.

Mr Harrabin then moderated a set of lively questions and comments from the audience. Contributions included: the volume and complexity of existing data, and the need to take informed action, but urgently; the need for audit and accounting mechanisms to place value on resources such as green spaces; urban agriculture as an aspect of meeting the projected doubling of demand for food; the tension between preservation of heritage and sustainable development; defeatism in the face of complex problems; buildings' durability, adaptability and planned obsolescence; new-build versus the need to retrofit existing property; that a sustainable city is not necessarily a radically different city; the need to start with an understanding of the impact of human behaviour; the need for common standards and languages in order to measure and predict; the danger of being too holistic - by taking everything into account, effectively nothing is addressed; the need to harvest the energies of populations, not just governments; carbon as a proxy for many other goods and services (eg water).UCL's new journal of sustainable cities, 'palette', was also launched at the event.

To find out more about the Grand Challenge of Sustainable Cities, to register your interest or to download 'palette', use the link at the top of this article.

First image: The Grand Challenge of Sustainable Cities
Second image: Attendees were asked to respond to the questions: "What's your key concern about the sustainability of cities? Whose help do you need to address it?"

Video: The panel discussion in full