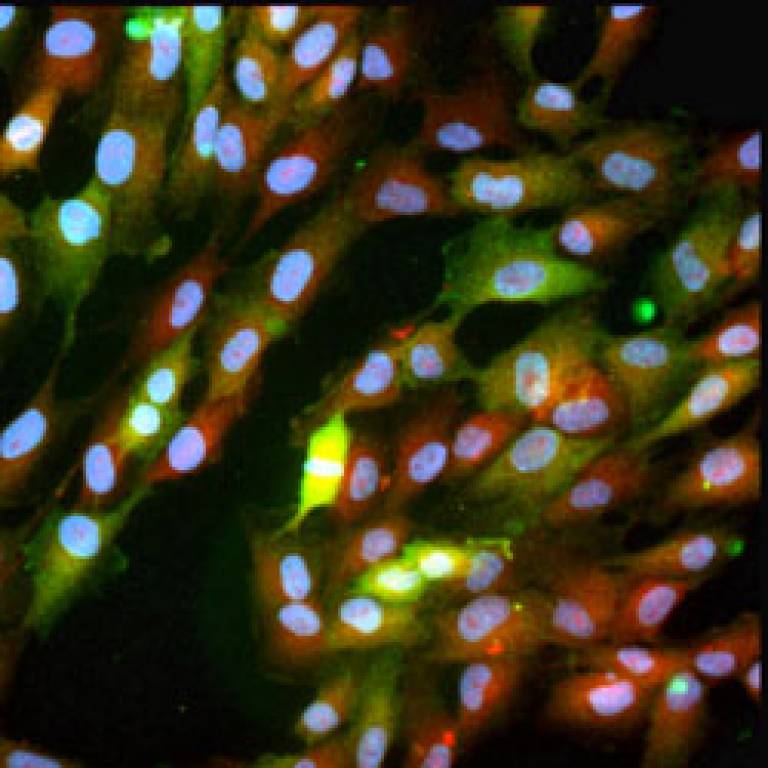 UCL scientists are part of a team that has located a region of DNA which - when altered - can increase the risk of ovarian cancer, according to research published today in Nature Genetics.

An international research group involving UCL, the Cancer Research UK Genetic Epidemiology Unit, and the University of Cambridge searched through the genomes of 1,810 women with ovarian cancer and 2,535 women without the disease from across the UK. They analysed 2.5 million variations in DNA base pairs - the letters which spell out the genetic code - to identify common spelling 'errors' linked to ovarian cancer risk.

The scientists identified the genetic 'letters'- called single nucleotide polymorphisms (SNPs) - which when spelt slightly differently increase ovarian cancer risk in some women. This is the first time scientists have found an SNP linked uniquely to risk of ovarian cancer and is the result of eight years of investigations. With the help of the international Ovarian Cancer Association Consortium (OCAC), they then looked at more than 7,000 additional women with ovarian cancer and 10,000 women without disease from around the world to confirm this finding.

Approximately 15 per cent of women in the UK population carry two copies of the variant DNA.

The lifetime risk for a woman carrying the DNA variant on one copy of the chromosome is increased by 20 per cent from ten in 1,000 to 12 in 1,000. Approximately 40 per cent of women in the UK carry one copy.

Senior author Dr Simon Gayther, whose work is supported by Cancer Research UK and The Eve Appeal charity which fundraises for the gynaecological cancer research team based at UCL, said: "The human DNA blueprint contains more than 10 million genetic variants. These are part and parcel of our characteristics and make-up - but a handful will also increase the chances of some women getting ovarian cancer and we have found the first one of these.

"There is now a genuine hope that as we find more, we can start to identify the women at greatest risk and this could help doctors to diagnose the disease earlier when treatment has a better chance of being successful."

Rose Lammy, the mother of David Lammy MP for Tottenham and Minister for Higher Education and Intellectual Property, died of ovarian cancer in 2008. Her DNA sample was included in the study, and she carried both risk alleles of the new genetic marker that researchers have identified.

David Lammy said: "I am pleased that Mum's sample was included in this study as it is one step towards earlier diagnosis of ovarian cancer when treatment is more successful. We now know the fact that she had this altered DNA meant that her lifetime risk had risen from 10 in 1,000 to 14 in 1,000, an increase of 40 per cent compared to those women who don't carry this DNA variation."