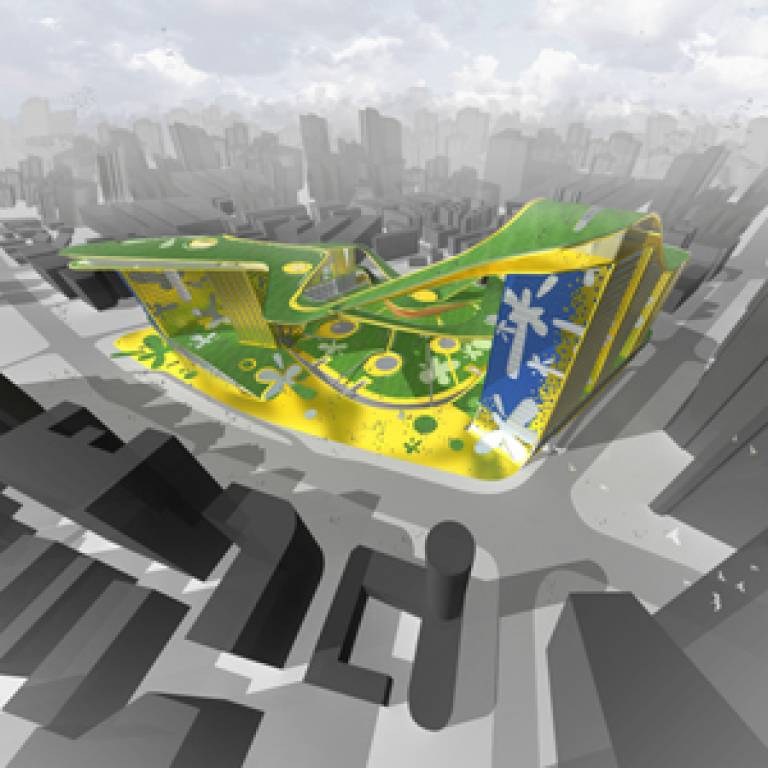 Professor CJ Lim (UCL Bartlett School of Architecture) has won an international competition to design a multi-use district in Shenzhen, a city in southern China.

The design was inspired by the 'golden bowl', a symbol of prosperity and an auspicious sign in feng shui. Professor Lim rejected the original brief based on vertical dominance, given the pre-existence of numerous towers in the district. Instead he adopted horizontal continuity to complement and enhance the social and cultural relationship between the buildings and the landscape, and to support in a sustainable manner the community that the shopping park will serve.

Professor Lim explained: "The public landscape, including the public park, expands into designated building areas and otherwise private spaces. The symbiotic relationship between landscape and building changes the politics of circulation and spatial programming: a series of bridges and ramps link the park directly into the shops, apartment and offices.

"A definitive edge podium is formed on the eastern edge of the sloped central public park, containing car parks and commercial spaces to include department stores and shopping arcades. On the west, the undercroft of the new landscape is a flexible and changeable culture/sports strip with a mobile art gallery and sports facilities. The new landscape also visually draws the existing school into the development."

Trees and floral patches in the park will form shaded and cooler 'sound gardens' for public relaxation and recreation. Five public pools, and water gardens and plazas provide further microclimatic pockets for cooling and play. A green ribbon will appear to float over the entire development, but will actually be supported by a series of inhabitable structures, which will accommodate apartments, offices and the hotel, a clubhouse and gym. A large-scale conference facility will sit underneath. The ribbon will provide a private park for residential, office and hotel use, with spectacular views over the 'golden bowl'.

Professor Lim, who is also Pro-Provost for North America, will be giving his inaugural professorial lecture on 'Collaboration, Creativity and Culture' on Thursday 2 October at 6.30pm in the Darwin Lecture Theatre. Please contact Tracey Cresswell if you would like to attend.