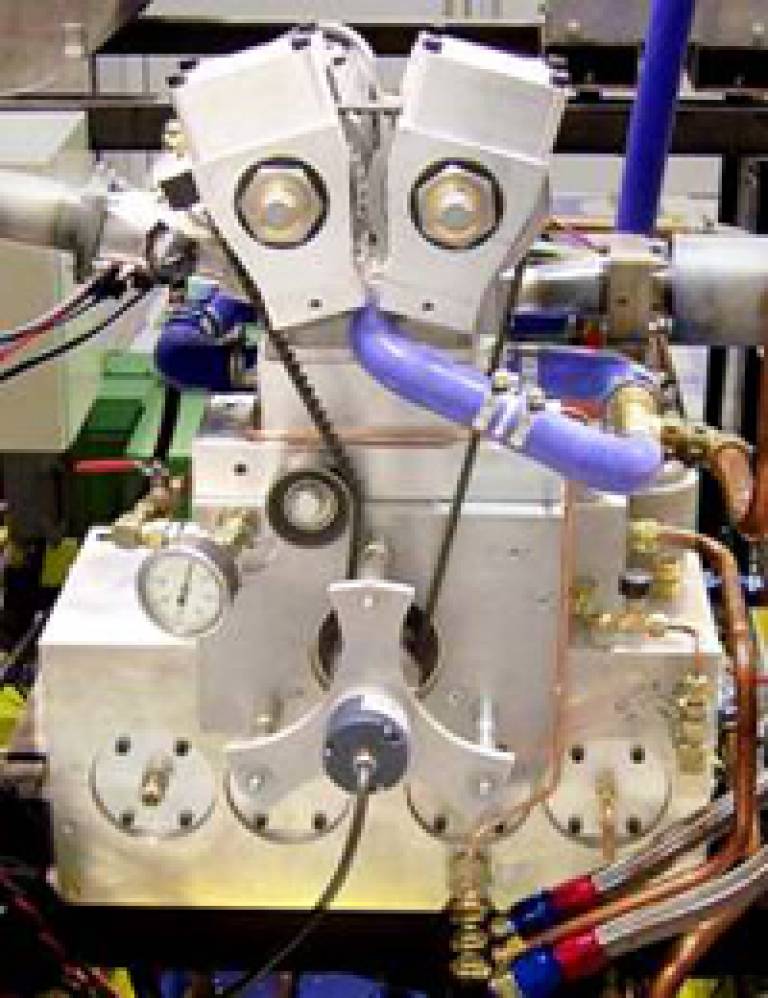 A car engine that reduces fuel consumption by spraying diesel directly into its cylinders, designed by UCL engineers, has won a major prize for innovation.

'Project Hotfire' received the top accolade in the automotive sector in the Engineer Technology + Innovation Awards 2008.

UCL's Department of Mechanical Engineering teamed up with Loughborough University on the project, as well as two industrial partners, Lotus Engineering and Continental Automotive. It was funded by government agency EPSRC.

As a result of the project a gasoline direct injection engine (pictured) was developed that reduces fuel consumption and CO2 emissions by 15 percent.

Five years on from the initial research, the engine is gaining interest from several large car manufacturers.

The system combines direct injection with a variable valve operation, which enables the amount of air sucked into the engine to be varied without reducing efficiency as it can use a smaller engine that can then receive a boost from a turbocharger.

The efficiency boost coms from reducing what are known as 'throttling losses' - when you close the throttle in a car, the air intake is partly closed off and the engine has to work hard to pull against a partial vacuum.

This engine uses a switching valve train, which changes from one cam profile that the engine uses when it takes air in, to another that's shorter and lower and does not allow much air in.

The project was initiated by a UCL team led by Professor Nicos Ladommatos, head of UCL Mechanical Engineering, who was already working with Simeons VDO (now Continental Powertrain) on the injector equipment.

The team asked Lotus Engineering to design a model single-cylinder engine that uses electrohydraulics rather than a camshaft to operate the valves, while Loughborough University's team used laser diagnostics to measure air motion, injection characteristics, air/fuel mixing and combustion.

The engine is now being demonstrated in an Opel Astra, where it cuts Co2 emissions by 15 per cent compared with the 1.8 litre four-cylinder standard engine for the model, with a 36 per cent increase in torque and 14 per cent more power output.