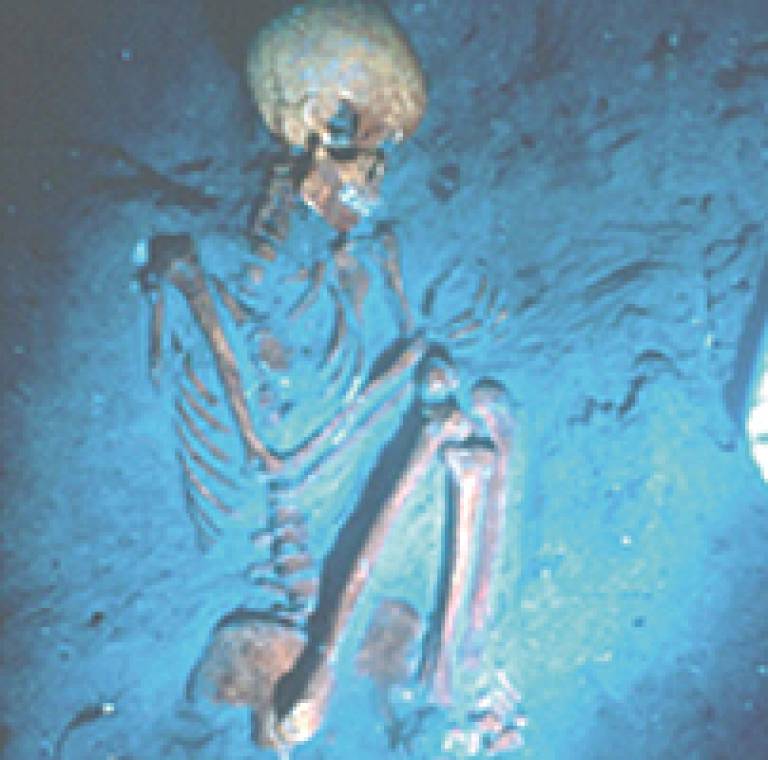 The discovery of the earliest known cases of human tuberculosis (TB) in bones found submerged off the coast of Israel shows that the disease is 3000 years older than previously thought.

The new research, led by Dr Helen Donoghue and Dr Mark Spigelman, both UCL Centre for Infectious Diseases & International Health, and scientists from Tel-Aviv University sheds light on how the TB bacterium has evolved over the millennia and increases our understanding of how it may change in the future.

They conducted detailed analyses of the bones using scientific techniques that revealed DNA and cell wall lipids from Mycobacterium tuberculosis, the principal agent of human TB.

The bones, thought to be of a mother and baby, were excavated from Alit-Yam, a 9000 year-old Pre-Pottery Neolithic village, which has been submerged off the coast of Haifa, Israel for thousands of years. Direct examination of this ancient DNA confirms the latest theory that bovine TB evolved later than human TB.

Professor Israel Hershkovitz, from Tel-Aviv University's Department of Anatomy, noticed the characteristic bone lesions that are signs of TB in skeletons from the settlement, one of the earliest with evidence of domesticated cattle.

The DNA was sufficiently well preserved for molecular typing to be carried out and the analysis of the bacterial cell wall lipids by high performance liquid chromatography provided direct, confirmatory evidence of tuberculosis.

Dr Donoghue said: "What is fascinating is that the infecting organism is definitely the human strain of tuberculosis, in contrast to the original theory that human TB evolved from bovine TB after animal domestication.

"This gives us the best evidence yet that in a community with domesticated animals but before dairying, the infecting strain was actually the human pathogen."

The scientists believe that the presence of large numbers of animal bones shows that animals were an important food source, which probably led to an increase in the human population helping the TB to be maintained and spread.

"We were also able to show that the DNA of the strain of TB in these skeletons had lost a particular piece of DNA which is characteristic of a common family of strains present in the world today," she added.

"The fact that this deletion had occurred 9000 years ago gives us a much better idea of the rate of change of the bacterium over time, and indicates an extremely long association with humans."

Dr Spigelman said: "Examining ancient human remains for the markers of TB is very important because it helps to aid our understanding of prehistoric tuberculosis and how it evolved.

"This then helps us improve our understanding of modern TB and how we might develop more effective treatments."

'Detection and Molecular Characterization of 9000-Year-Old Mycobacterium tuberculosis from a Neolithic Settlement in the Eastern Mediterranean' will be published in the Public Library of Science journal PLoS ONE on 15 October.