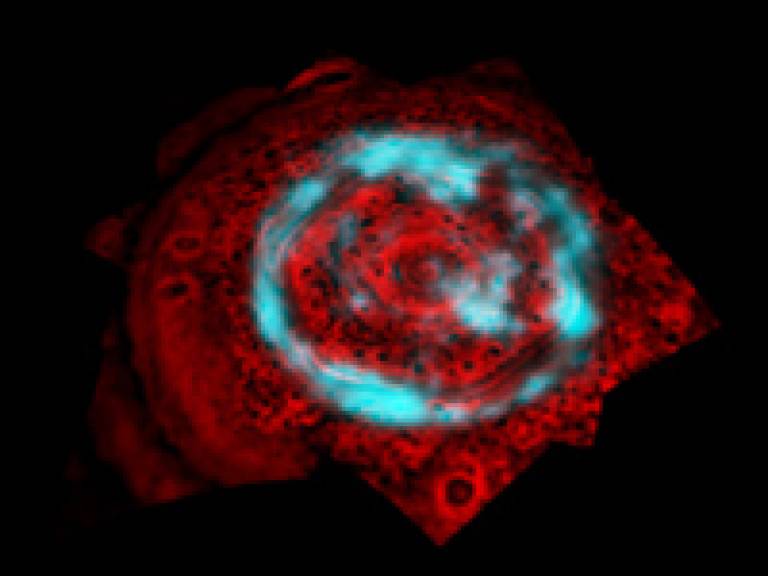 UCL astronomical researchers have uncovered potential 'Earth 2.0' moons throughout the universe and a new aurora lighting up Saturn's polar cap.

David Kipping, a postgraduate at UCL Physics and Astronomy, has calculated that rocky, Earth-like moons belonging to the universe's 30 known exoplanets could be revealed by the planets' "wobbles".

His findings, published in 'Monthly Notices of the Royal Astronomical Society', show that the moons become apparent when the planet passes in front of its star as viewed from Earth. Because a moon would induce a wobble in the planet's orbit, the planet's position and velocity would differ slightly on each transit.

Steve Miller, UCL Professor of Planetary Astronomy and Head of Science and Technology Studies, is among nine international researchers behind a paper revealing a unique aurora lighting up Saturn's polar cap.

The aurora (pictured) was detected by an infra-red camera aboard NASA's Cassini spacecraft, in a region hidden from the Agency's Hubble Space Telescope. In infrared light, the aurora sometimes fills the region from around 82 degrees north all the way over the pole. It also constantly changes - and even disappeared within a 45-minute period.

The discovery, outlined in 'Nature' magazine, came as a surprise to the scientists, who had expected to find the region empty. The aurora is also distinct from Saturn's main aurora, which is caused by the solar wind and which changes size as the wind varies.

Aurora are created when charged particles stream along the magnetic field of a planet and into its atmosphere. They are also known to appear on Earth and Jupiter.

For more pictures of the aurora, click on the link above to the Cassini Project.