The unholy origins of English song 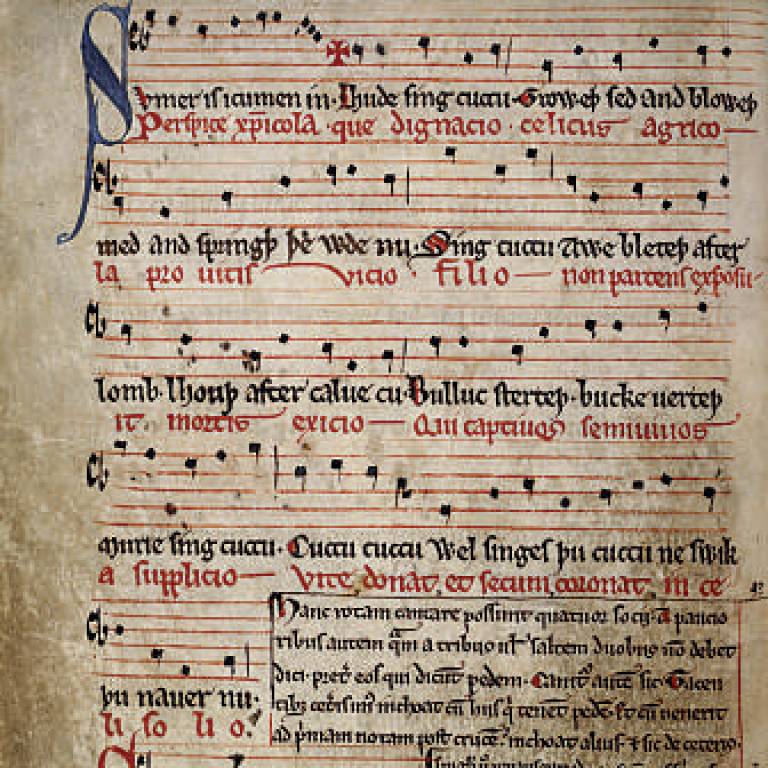 Dr Ardis Butterfield (UCL English) has won a Leverhulme Trust Major Research Fellowship to reunite medieval song lyrics with their original manuscript settings in a unique edition of early English songs, revealing that definitions of 'sacred' and 'profane' have become more conservative over the past 500 years.

The 2,000 or so medieval lyrics that survive are popular among today's students of Middle English, due to their beauty, enigmatic nature and their accessible short form. However, modern anthologies have tended to categorise the lyrics by theme, often along strictly religious or secular lines, which frequently obscures the ambiguity and variety of the subject matter within individual pieces. The vast majority of the lyrics are anonymous, which means that the history and context behind the creation of the lyrics are largely unknown. This has been compounded by the segregation of research into the music and the language of the lyrics to date.

Dr Butterfield explains: "Literary people tend to be shy of approaching the music itself. Conversely, musicologists often get nervous when it comes to poetry. As a result, exploration of the extensive creative partnership between words, music, popular culture and devotion has tended to fall between the cracks. We want to know who created this poetry and why; whether the lyrics were meant to be sung, and if so, when and how.

"For example, 'Now goth sonne under wod' ('Now the sun sets beneath the wood') is very popular in modern anthologies and is presented as if it were a stand-alone lyric. In fact it is buried in a 13th-century Anglo-French treatise by St Edmund of Abingdon."

Examined within their original manuscript settings, Dr Butterfield believes the lyrics could provide new insights into life in medieval England. Their authors would have had broader horizons than most of the population, as the majority of literate people had been to university to train to become clerics. Lyric writers tended to be those who had 'dropped out' before being ordained, going on to live in a monastic or cathedral community.

In many medieval manuscripts, sexual and obscene references are freely used to reinforce religious messages - a liberalism rejected by modern anthology compilers who force them clumsily into rigid 'religious' or 'secular' categories. In a 13th-century sermon, a preacher urges his congregation to wrestle with its spiritual enemy by quoting the couplet:

The manuscript of the most famous medieval English song 'Sumer is icumen in' ('Summer is coming'), still taught to schoolchildren today, exemplifies the easy bedfellows that religion and the obscene once were. There are two sets of lyrics beneath the melody: the English one is secular, the Latin one sacred. Dr Butterfield will also explore the trilingual nature of 'English' songs in the Middle Ages, when French and Latin were the dominant languages in the period of her research.

In addition to the new edition of lyrics, Dr Butterfield will also publish a book that will bring together for the first time a study of music, texts and manuscripts to produce a richly cross-disciplinary account of medieval short verse and the creative practices that brought it into being.

To find out more about Dr Butterfield's research, follow the links at the top of this article.

Image: 'Sumer is icumen in', a vocal composition for several voices, is probably the most celebrated piece of English medieval music. Besides the English secular text 'Sumer is icumen in', the melody is provided with a Latin sacred one 'Perspice Christicola' - the earliest known manuscript in which both secular and sacred words are written to the same piece of music. Image taken from Summer Canon [Reading Rota], originally published/produced in England [Reading Abbey, co. Berks.]; mid-13th century.