Kader Abdolah: In the kitchen of the writer

Kader Abdolah fled the Khomeini regime of his native Iran 20 years ago, settling in the Netherlands. 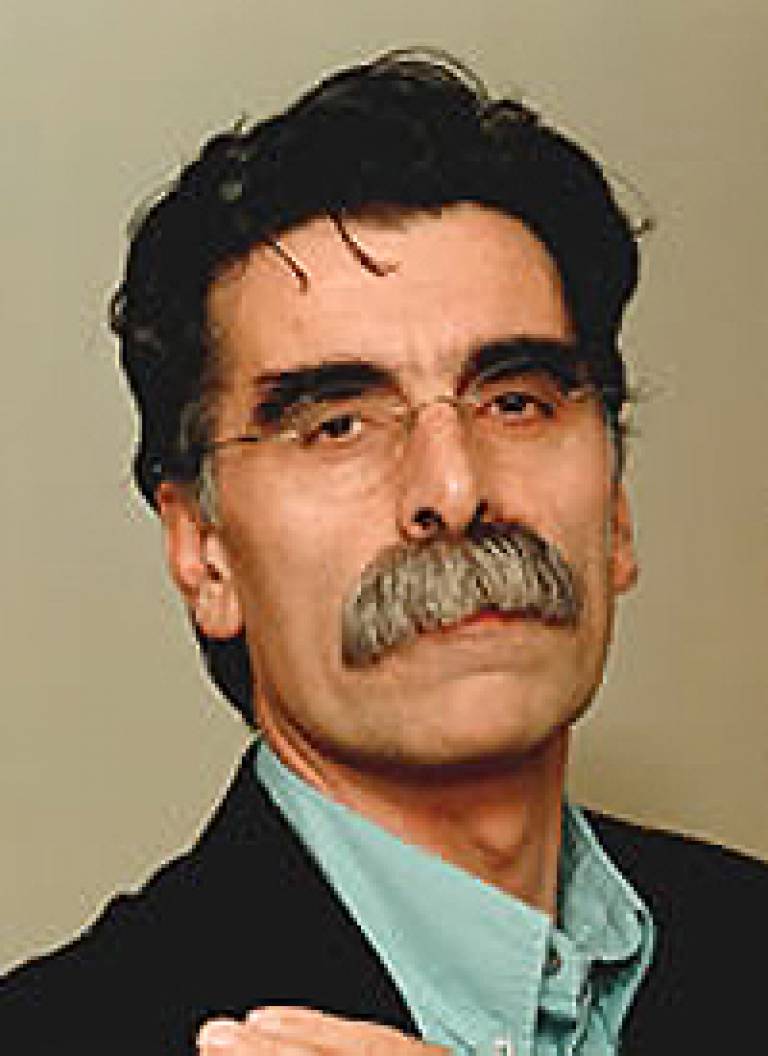 Rapidly mastering Dutch, his novels and short stories blending the two cultures have put him on the bestseller lists. Here he tells of his delight at being writer-in-residence in UCL Dutch for the past six weeks.

"This has been a great experience. The students are just beautiful." This enthusiasm is typical of Kader Abdolah; nothing about him is middle-of-the road, from the dramatic emphasis he places on every sentence to his imposing physical presence.

He explains that it is the ambition of UCL students that he admires, the like of which he has never come across. This is his third experience of university life: while studying for his physics degree at Arak College of Science in Tehran he was active in the leftwing underground movement against the Shah and later Khomeini (he has taken his pen-name from a friend who was killed in the resistance). Once in the Netherlands, where he arrived thanks to a last-minute place on a Dutch UN delegation, he studied 17 hours a day in the University of Utrecht for a year, determined to continue his nascent writing career in his new language.

Despite setting the bar high, he found UCL students' diligence measured up to his own. Over the past six weeks, Kader has taken part in a group translation of two of his short stories and given classes on creative writing with UCL Dutch undergraduates.

"Students here have to do a lot - and they do. The university puts a big part of the responsibility on their shoulders. Here the professors say: 'This is the what you need to do: go! Come back if you have questions.' I like it - it's a good way to discover yourself."

Most of the students had read some of Kader's work before he arrived, with finalists studying his longer novels. He has won awards for his collection of short stories 'De adelaars' (Eagles) - the bestselling debut of 1993 - and 'Spijkerschrift' (My Father's Notebook), a novel that explicitly deals with communication and translation. "I think the students like me more than other writers: they know I know their problems with the language. They can read my early books, where I use few, simple words, and they feel 'I can read Dutch literature!' It's a good feeling."

The translation of his short stories, for which students worked online with counterparts at the universities of Sheffield and Cambridge, was revelatory for Kader, who isn't normally heavily involved with that aspect of his work.

"I was surprised how the students were so intensively busy with my words; I put them on paper but had never thought so closely about them. I discovered my own writing and words during the time the students were discussing them. They put the mirror before me, and I liked it very much."

This intimacy continued in discussions he led about creative writing. "With some students, we discussed critics in literature - my reactions to them. I explained how a writer can handle it, how important that is. We talked about everything; I said, 'We are in the kitchen of the writer' - it's not how I normally talk to an audience."

Given the political constraints he experienced as an undergraduate, it's small wonder that the cosmopolitan nature of UCL has been a highlight for Kader. "I enjoyed participating in the talks: I have been to universities at Sheffield, Cambridge, Durban, and there are not so many. Here there are lunchtime talks, talks over drinks, at 5pm…you feel something is happening, all the time. There are so many different types of people who want to say something to you. There is a good feeling in the university; you can be yourself. UCL gives a feeling to students from all over the world that they can live together - it's a gift the university gives to the students.

"I had a strange and great experience with the Muslim students. I saw their banners and posters about their talk and I'm not a believer but I am interested as a writer. At first nobody came and I thought that people are afraid of them. Then after a while about 100 people came - the atmosphere! As a Dutchman I ask myself how is it possible? Dutch society is very different from English society: we talk openly about everything, everyone talks about the Koran but nobody has read it."

Kader attributes this ignorance to the difficulty of all the available translations, and has undertaken one himself, which he has been revising during his time at UCL for publication in The Netherlands in April. A novel about the life of Mohammed will be sold alongside it.

"I am writing a novel about Mohammed not as a holy man but as a human; an interesting figure, a Mohammed that Europe needs." The first print run is well into the thousands, unusually large for books published in The Netherlands. "We are busy to change society; we will give the openness and busy-ness of the UCL atmosphere to the Dutch society," he jokes.

Kader's lust for new experiences took him to numerous spots around Bloomsbury to check his proofs. "I went to the library, the canteen, the teachers' rooms, I spent one hour in the library of the British Museum. I made the most of the opportunity of being here at UCL." His embrace of all things new is bittersweet: "Many of my friends were arrested or are dead, and here I am at UCL, with enormous freedom. I enjoy it but it also bothers me, I feel guilty too. I try to live every moment of every day, to taste it. All the time I want to say to students, 'Be conscious! This time is going very fast!'"

Now at the end of his stay in London and his twin publishing project, Kader has found himself in a cultural and professional hiatus. He describes it as "living in three dimensions" - being physically in London, reflecting on the past and thinking about returning to The Netherlands. "Yesterday the students asked me, 'What feeling do you have when you finish a novel?' And I said, 'You have a gap psychologically - and you need to mind the gap!' "