Reform and reputation in the 1800s: the UCL Bloomsbury Project 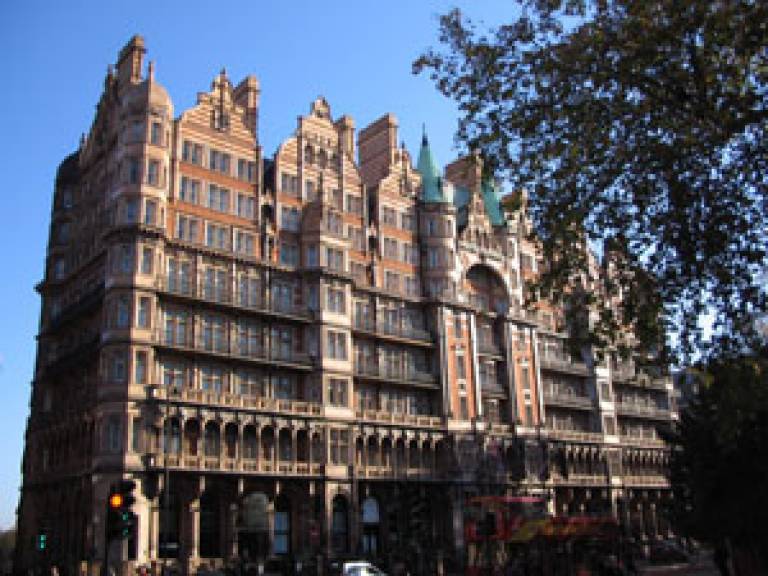 The inaugural conference for UCL's Bloomsbury Project was held at the Wellcome Trust on 26 June. Opened by Professor Rosemary Ashton (UCL English) who is co-heading the project, the conference comprised a series of taster lectures, giving the delegates a flavour of different Bloomsbury research projects.

The three-year Bloomsbury Project, funded by a grant from the Leverhulme Trust, brings together a range of researchers from across several disciplines and institutions. The aim of the project is to piece together an archive, illustrating 19th-century Bloomsbury's development from swampy rubbish-dump to centre of intellectual life.

Dr Deborah Colville gave the first lecture of the day, talking about the portrayal of 19th-century Russell Square in fact and in fiction.

Entitled 'But Where, Pray, is Russell Square?' her talk described the public perception of Russell Square during the 19th century. Denigrated by the beau monde of the 1820s as 'a place very much laughed at by witty men' due to its unfashionable Bloomsbury location, Russell Square went on during the course of the century to gain the reputation of being home to the wealthy (and flashy) merchant classes. Dr Colville argued that this reputation was generated by the fictional, rather than the factual, inhabitants of the square.

The most famous fictional account of Russell Square during the century was in 'Vanity Fair', William Makepeace Thackeray's great satirical novel, which he penned in the 1840s. The Russell Square depicted in the work is that of the 1820s, during the aftermath of the Napoleonic Wars, when two merchant families, the Sedleys and the Osbornes, both resided in the square. The rather unflattering depiction of their family life gave Russell Square a particular place in the popular imagination that had little to do with real life in the square:

"In fact, records show that the early inhabitants of Russell Square were generally members of the legal profession rather than merchants," said Dr Colville.

The reputation may have had a major impact on the way that the square developed, hindering it from becoming home to public institutions, argued Dr Colville. While other squares in the area became home to charities and educational establishments, the houses in Russell Square remained private residences. As late as the 1890s, the philanthropist Passmore Edwards refused to consider an educational settlement in the area, dismissing it as "too kid-glovish and Russell Squarish."

Educational reform in 19th-century Bloomsbury was the subject of Professor Ashton's lecture 'From the SDUK to the Passmore Edwards Settlement: Widening Access to Education in Bloomsbury.'

Professor Ashton discussed the impact of the Bloomsbury-focused Society for the Diffusion of Useful Knowledge (SDUK), caricatured in contemporary fiction as the Steam Intellect Society, which published inexpensive texts on scientific subjects for the benefit of the rapidly expanding reading public.

Set up by many of the same reformists who founded UCL and led by Henry Brougham, the SDUK was founded in 1826 and active until the 1840s, with publications such as the 'Penny Magazine' reaching a circulation of around 200,000 copies a week at its peak.

Despite its educative mission, the SDUK had a mixed reception by the public and the press. Henry Brougham in particular was lampooned by satirists, including the cartoonist George Cruickshank and the novelist Thomas Love Peacock. Professor Ashton set the uneasy reception of the reformists against the political background of the 1820s, with contemporary anxieties about the working man 'getting above his station'.

Even after the winding up of the SDUK in 1848, educational reform continued to flourish in Bloomsbury. Passmore Edwards Settlement, now known as Mary Ward House, was built in Tavistock Place in 1897 as an education centre for the poorer children of Bloomsbury, and operated the first school for disabled children in the country, as well as introducing the concept of play into children's education for the first time.

In the third session of the morning, Negley Harte, Honorary Professor in UCL History, talked about the social history of UCL's own Gordon Square. The fortunes of the square dwindled towards the end of the 19th century, Professor Harte explained. In fact, founding members of the Bloomsbury Group, Vanessa and Virginia Stephen, settled in the area in 1904 because they were attracted to its decaying atmosphere and bohemian potential: "The area was said then to have more of the berry than the bloom," added Professor Harte.

Later conference sessions included 'Medicine in Bloomsbury' (by Professor Anne Hardy, Wellcome Trust Centre for the History of Medicine at UCL and co-leader of the project) 'Women Undergraduates in UCL's Faculty of Arts in the 1880s and 1890s (Dr Charlotte Mitchell, Senior Lecturer in UCL English) and 'Homes of Hope: The Rescue and Reform of Bloomsbury's Fallen Women (Dr Berry Chevasco, Director of Alumni Relations at UCL English).

The Bloomsbury Project will next report in November 2008, when Professors Ashton and Hardy will address the Camden History Society. At a separate event on 5 July for the London Festival of Architecture, Professor Ashton will lead a walking tour entitled 'Historic Highlights in the Building of Bloomsbury'. For details of the events, and of the Bloomsbury Project, use the links at the top of the article.