Professor Bartolomeu dos Santos was always proudly Portuguese, and he came to be proudly Anglophile too; he made his career in England without losing any of his Portuguese roots. 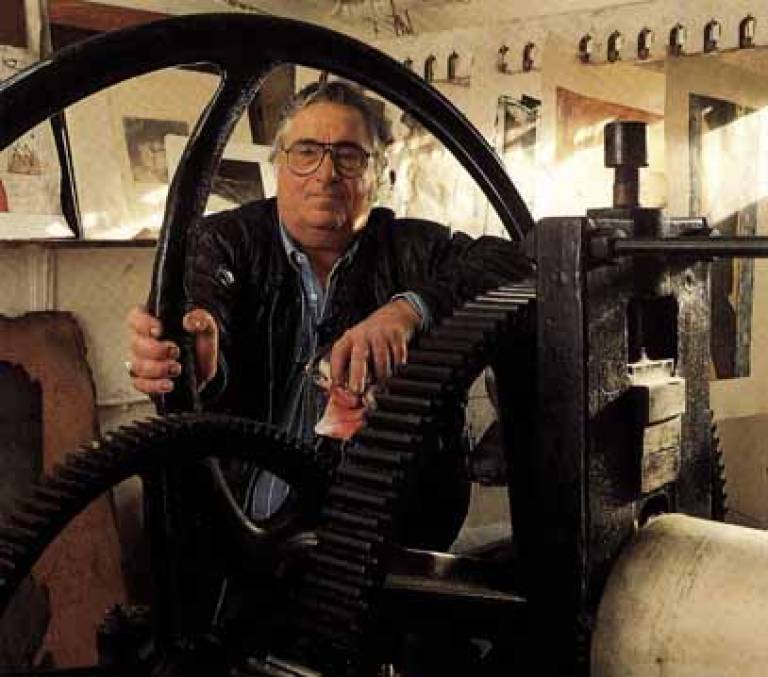 He became a well-known and widely admired artist in both countries, and indeed throughout the world. He was a wonderfully creative printmaker and a magnificent teacher of printmaking.

Bartolomeu dos Santos - Barto as he was universally known - was born in Lisbon in 1931, where his father was a surgeon of distinction and a well-read bibliophile, and evidently a powerful influence. Barto spent six years at the Escola Superior de Belas Artes in Lisbon, between 1950 and 1956. He then came to London for what was intended to be a short period of further study. The day he entered the UCL Slade School of Fine Art in October 1956 was to transform his life.

His registration card at the Slade records his signing up for a single 'graduate non-diploma year' - no degrees in art for either undergraduates or graduates in those days - and at the end of his first year in June 1957 he was awarded the first prize for etching. 'I did not know what the word etcher meant', he later said. 'But I soon found out, and with it the potentialities of aquatint with its deep, profound blacks and beautiful half tones that Goya understood so well'.

For the rest of his life Barto was fascinated by 'deep, profound blacks and beautiful half tones', and in 1956-57 he came to be permanently in love with the Slade, with London, and with Professor Sir William Coldstream.

Sir William Coldstream, the Slade Professor, was for a generation a commanding figure: sleight, darting, dapper, always in a suit and tie and waistcoat, brilliant in conversation, exuding a constant brisk irony. Barto could not have been more different. Always larger than life, never in a tie or a suit, always with some sort of hanging medallion, not remotely interested in committees or business; social occasions he thought were for food and drink and laughter and fun, not for decision-making or planning. But Bill and Barto hit it off. They immediately came to like and to deeply admire each other both as people and as artists. Barto was never to leave the Slade.

He could do a brilliant tight-lipped imitation of Bill speaking. Barto stayed on for another year. His teachers were William Townsend and Anthony Gross, the one English, the other introduced to him as 'a European'. He admired them both. For him the tolerant attitude at the Slade, the constant discussion of everything, was a breath of fresh air after his youth in fascist Portugal. The theme of freedom versus imprisonment was to produce recurring images in his art. He stayed to teach at the Slade, joining the full-time staff in 1961, becoming Head of Printmaking and eventually in 1994 was belatedly given the status of a full Professor of Fine Art. His academic advancement was much slower than his creative endeavour, or his remarkable influence as a teacher.

The fifty years after his arrival at the Slade in fact witnessed an explosion of creativity. Barto's prints were shown at the Arts Council's 'Young Contemporaries' exhibition in 1957, and also at the first Gulbenkian Exhibition of Modern Art in the same year in Lisbon. There was to be no year in the next fifty when he did not show work in an exhibition, and there were to be over a hundred one-man shows, not just in Britain or in Portugal, but all over Europe, the Americas and Asia.

He travelled with enthusiasm. He was a Visiting Professor at the University of Wisconsin at Madison in 1969 and 1980; at Umea in Sweden in 1977, 1978 and 1982; at the National College of Art in Lahore, Pakistan, in 1986, and frequently in the 1980s and 1990s at the Academia de Artes Visualis in Macao. He was a visiting lecturer or external examiner at practically every British college of art.

His creativity knew no bounds. Menu cards for Air Portugal; covers and illustrations for books; large-scale murals in etched limestone for the Lisbon underground station serving the National Library, with clever references to the whole of Portuguese literature, and Bentham and Crabtree are not absent either; the huge monument at Grandola to the 1974 revolution in Portugal, which freed the country from fascism; a further huge etched mural for an underground station in Tokyo.

Barto was a craftsman of great skill and also humour. 'His personal myth', wrote a perceptive critic from King's College, 'is expressed as a metaphor of freedom and release, a journey into liberating space. Here, his explicit or implicit reference is to the world of the arts: music and literature - a Schubert score, a poem by Pessoa - the world of the liberated imagination'. His distinctive prints are in almost every important collection in the world - the BM, the V&A, the Ashmolean, the Fitzwilliam, the Bodleian, the Albertina in Vienna, the Biblioteque Nationale in Paris, the Museum of Modern Art in New York.

Barto was also a leading member of the Crabtree Foundation, that semi-secret society at the heart of UCL. He delivered the Crabtree Oration in 1985, a brilliant performance on 'Joseph Crabtree and the Caliph of Fonthill', and was President of the Foundation in 1993. The lunch he gave as President at the Anglo-Portuguese Society at Canning House was quite memorable; I was late for my research seminar (which meets at 5.15) and knew I was to have little recollection of the seminar.

For a decade or more he and Fernanda enjoyed entertaining former Crabtree orators and other elders of the Foundation every other year for a splendid party at their spectacular house in Sintra, varied by a visit to Tavira, the pretty old fishing port on the south coast of Portugal where the Gulbenkian Foundation had contributed to provide him with a studio, where he welcomed talented young print-makers to a sort of recreation of his print-making studio as an outpost of the Slade.

He was rightly honoured in 1995 by his election as a Fellow of University College London, and on his retirement in 1996 he was made an Emeritus Professor. He continued to move frequently between his houses in London and Sintra , spreading enlightenment and enjoyment to a wide circle of friends.

Recovering apparently well from one cancer, he was zapped by another. He died in University College Hospital, a stone's throw across Gower Street from his beloved Slade.