UCL's astronomers and Haringey schoolchildren team up for science success 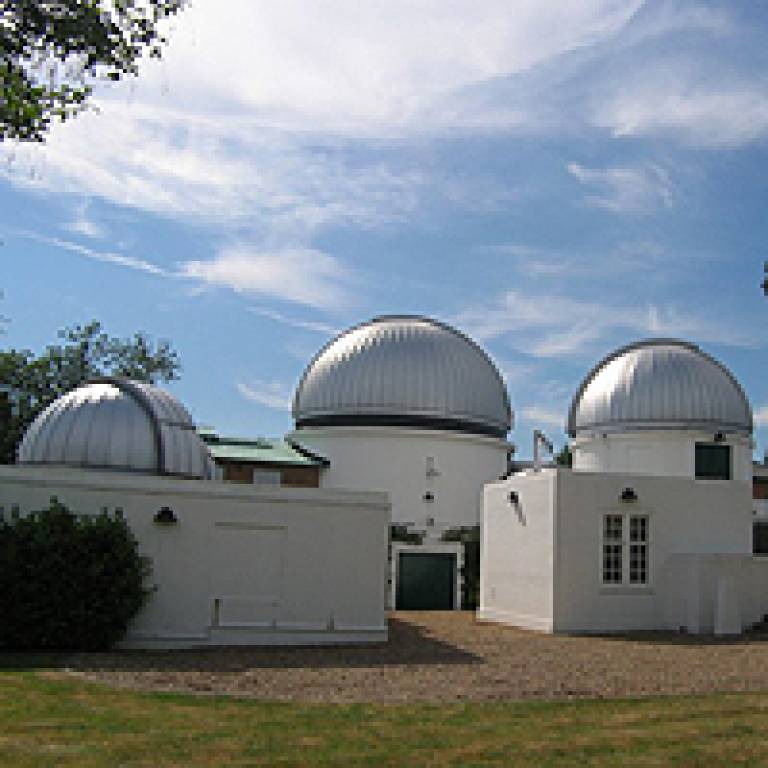 UCL Physics & Astronomy has won an award at the London Education Partnership Awards (LEPA) for the department's outreach work with local schoolchildren.

They won LEPA's Excellent Professional Practice in Curriculum and Student Support in the science, technology, engineering and mathematics category, with a project that involved visits to the University of London Observatory, UCL's teaching observatory at Mill Hill.

Dr Fossey said: "Mike Terry, Director of Specialist Schools at Alexandra Park, contacted us about helping the school to raise uptake and achievement in GCSE and A-level science subjects, promoting the general awareness of maths and physical-sciences courses in higher education - with a focus on physics and astrophysics in particular."

The collaboration has grown over several years - starting with a series of UCL presentations on astronomy, UCL's support has since expanded to include the development of curriculum resources for GCSE and A-level physics, and the joint planning and delivery of material at the school's Curriculum Day, with the support of UCL undergraduate and postgraduate students.

"We took the A-level students on tours around the observatory, got them talking about the use of telescopes in astrophysics and invited them to join in on some observations, which they found quite inspirational," added Dr Fossey.

"What's different about this project is that instead of simply going into schools to give the odd lecture, we have some continuity with the students and enjoy ongoing contact with them, which enables us to focus the development of teaching resources."

Roz Hudson is the Head Teacher at Alexandra Park, and she said the school was delighted to receive the award: "Young people are fascinated by astronomy, but to translate that into raising achievement in a difficult subject like science is thrilling.
"When we started the separate science course in 1999 we had just 15 students take it up, but now we have over 100, so the impact of the this partnership on the students has been tremendous. You could call it our astronomical success."

Professor Michael Worton, Vice-Provost (Academic and International) said: "UCL is committed to working with schools throughout London and to developing new partnerships with them.

"The work being done by UCL Physics and Astronomy is an outstanding example of this, and we are very proud that their pioneering work has been recognised by an LEPA award".

Camden Academy
UCL will be extending its support of secondary school education in London through its sponsorship of an Academy in Camden, which is due to open in 2011.

Backed by the government and Camden council, the Academy will be the first in England to have a university as its sole sponsor.

It will create 900 school places in years 7-11 (with an additional 250 in the sixth form) and will be a centre of excellence for maths and the sciences. The school will also have a special focus on modern foreign languages and 'education for global citizenship'. The Academy be will able to draw on UCL's research and teaching expertise in all areas of the school curriculum.

To find out more about LEPA, UCL Physics & Astronomy, the University of London Observatory and news items on the Academy in Camden, click on the links at the top of the article.