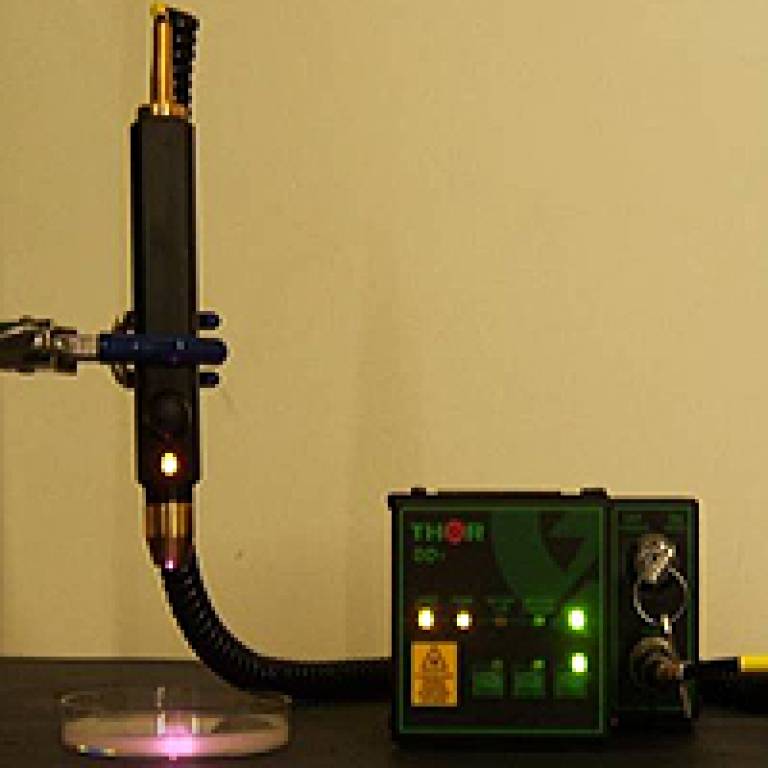 The infected area is 'painted' with a special dye, which seeps down into the wound before being activated by a special infra-red laser. When the dye is stimulated by the laser in the presence of oxygen, it generates reactive chemicals that attack the bacterial cell wall and other components.

Dr Sean Nair, a member of the team at the Eastman Division of Microbial Diseases who helped develop the new technique said: "The key advantage of this system over conventional antibiotics is that the bacteria are unlikely to develop resistance because the chemicals generated in the process kill the bacteria in many different ways.

"This system is also particularly useful for treating deep-seated wound infections, which are usually very difficult to treat, because the small dye molecule can diffuse well into the target area and because the infra-red laser light can also penetrate deep into the tissue."

The dye is known as indocyanine green, a tried and tested chemical used often used as a marker in cancer detection. It absorbs infra-red, but, critically, it doesn't heat up despite the intensity of the laser's light.

Professor Michael Wilson, who led the Eastman team, said: "Infected wounds are responsible for significant morbidity and mortality, and an increase in the duration and the cost of hospital stay.

"The growing resistance to conventional antibiotics among organisms that infect wounds and burns makes such infections difficult to treat. The technique we are exploring is driven by the need to develop novel strategies to which pathogens will not easily develop resistance."

The team's research has just been published in the open access journal 'BMC Microbiology'. To read the journal article, or to find out more about Professor Wilson and Dr Nair, use the links at the top of the article.