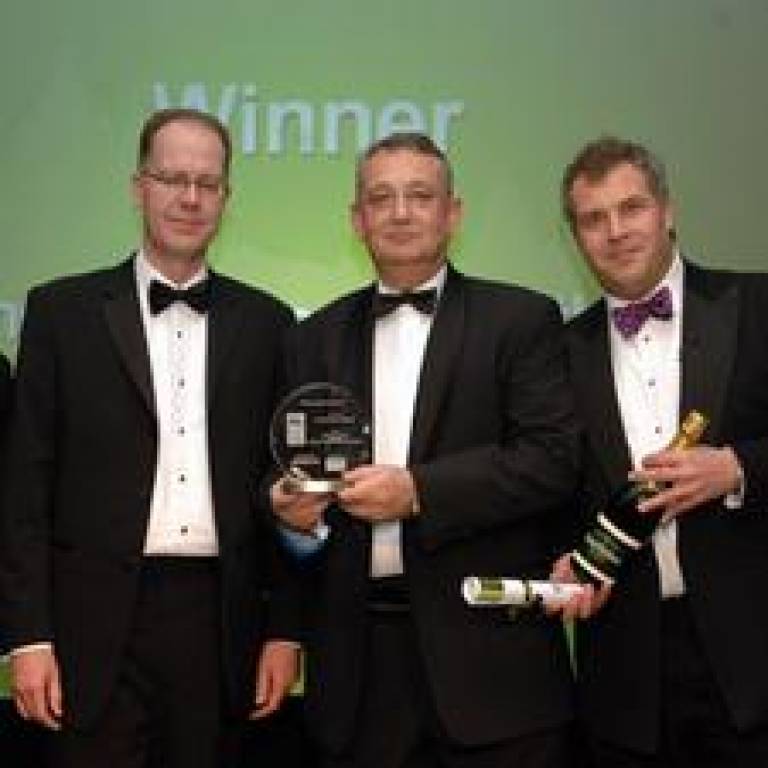 stanmoreimplants.com/" target="_self">Stanmore Implants Worldwide The 'Times' article: 'Cybergran, the 7/7 survivor who came back from the dead, pioneers the clip-on arm'

Two of UCL's four nominees for the 2009 London Knowledge Transfer Awards were announced as winners at the Awards Gala Dinner held at 'The Royal Garden Hotel' in Kensington on 5 December. Dr Jeff Skinner won the 'Knowledge Transfer Champion' award, which was voted for by the public, and Stanmore Implants Worldwide Ltd won the 'Commercial Deal of the Year' award. The awards celebrated innovation resulting from collaboration between universities and business, resulting in the profitable sharing of ideas and expertise.

Dr Skinner is the UCL Director for Corporate Alliances, and has been central to knowledge transfer and commercialisation activities at UCL for sixteen years. He has played crucial roles in the development of UCL Business, UCL Consultants and latterly as Commercial Director. During that time he has helped spread best practice in all aspects of knowledge and technology transfer through key roles with the leading professional bodies PRAXIS and ASTP. Since autumn 2008, Jeff has been Executive Director of the Foundation for Entrepreneurial Management at the London Business School but maintains his links to UCL through continued work with UCL Advances.

Stanmore Implants Worldwide Ltd is a successful spin-off company from UCL's Centre for Biomedical Engineering, an innovative orthopaedic business focused on saving and restoring the function of limbs and joints. It was sold in February 2008 to a syndicate led by Abingworth Management and MDY Healthcare plc in a deal worth £12.5m. SIW recently pioneered a significant new implant that enables the attachment of clip-on prostheses to one's skeleton and skin without causing infection. The technique, known as ITAP (Intraosseous Transcutaneous Amputation Prosthesis), was developed by Professor Gordon Blunn, Head of the UCL Centre for Biomedical Engineering, and SIW, and is based on reindeer antlers, which naturally grow through the skin without problems.

Mrs Kira Mason, a survivor of the London bombings on 7 July, 2007, was the subject of the pilot for the implant. Speaking to the 'Times' this week, she said that she had previously had trouble managing prostheses, because they were difficult to put on with one hand. She said that this new implant "looks and feels much better than the prostheses I'd tried before, and is so convenient". Previous prostheses had also led to skin irritations or restricted movement, but "now I just wake up, clip on the arm and away I go". The new artificial limb is directly connected to her body through the implant, which therefore results in her having  far more "feeling" than other prostheses. Battery-powered sensors allow her to grip or hold objects in her artificial left hand by flexing muscles in her upper arm.

To find out more about this, or any other part of the story, please see the links of the top of this page.