Spirals shape how we think 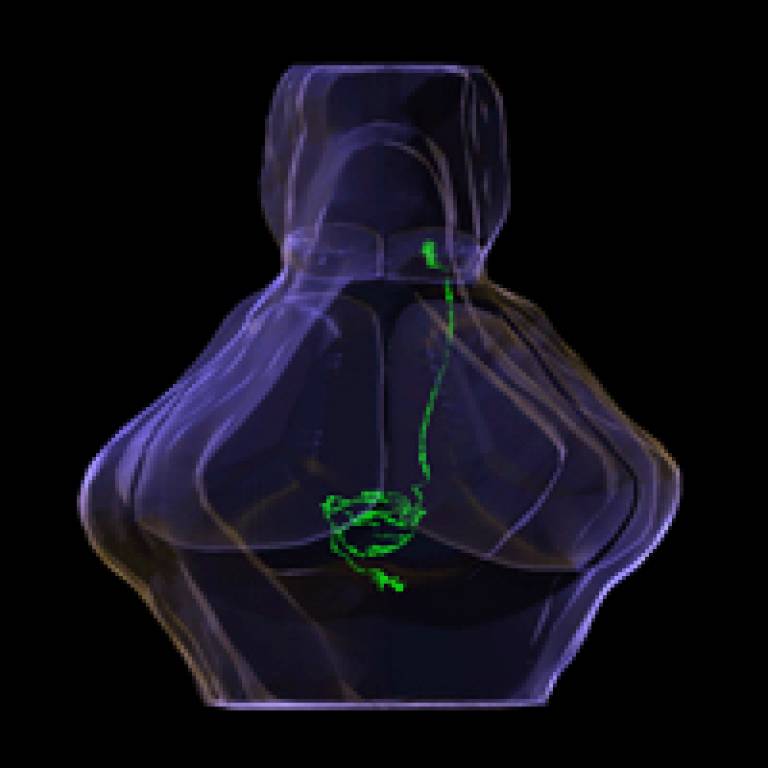 Cells on the left and right side of the brain produce differently shaped nerve fibres to transmit signals, which could explain how both halves process different types of information, according to research led by Professor Stephen Wilson (UCL Cell and Developmental Biology) published in  'Neural Development' today.

Professor Wilson and PhD student Isaac Bianco caused left and right-sided neurons (nerve cells) in a part of the brain called the habenula to produce a bright green fluorescent protein. These formed spiral-shaped axons, the long nerve fibres that act as the nervous system's transmission lines. The researchers found that there were two very different types of neuron that were both found on both sides of the brain.  However, whilst most of the left-sided cells produced spiral axons shaped into a domed crown, most on the right form flat, shallow spirals.

The sides of the brain differ in many animal species, which is thought to influence cognitive performance and social behaviour. For example, in humans the left half of the brain is concerned with language processing whereas the right side is better at comprehending musical melody.

"It's clear that the left and right halves of the brain process different types of information, but almost nothing is known about the differences in the brain's circuitry that achieve this," said Professor Wilson.  "One possibility is that totally different types of neuron might be found on the left and right.  Alternatively, both sides could contain the same building blocks but put them together in different ways".

Isaac Bianco explained: "In the same way that an engineer can make different electronic circuits from the same set of electronic components, so the left and right halves of the brain use the same types of neuron but in different combinations."

The left and right habenular circuits both connect to the same part of the brain and the researchers found that this may either combine signals from the left and right or handle them independently.

"Even though language is processed largely on the left side of the human brain, people don't speak with only one half of their mouth.  The brain must contain circuits which take information from the left or right and then send it on to targets on both sides of the body," said Professor Wilson.

The scientists also found that a tiny group of cells, located close to the left habenula, are important for the development of brain asymmetry. By destroying these cells with a laser, they found that left-sided neurons formed the flattened spirals that are usually more prevalent on the right, though subtle differences between the left and right sides were still apparent.

To find out more about the research, follow the links at the top of this article.

Image 1: A habenula neuron in the brain of a zebrafish larva, labelled with green fluorescent protein.

Image 2: An example of the basket-shaped spiral arbors that are formed by most left-sided neurons, but only by a few right-sided cells.

Image 3: The majority of right sided neurons form spirals where the axon winds around to form a flattened ring, as shown here.  These spirals are also formed by left sided cells, but much less often.