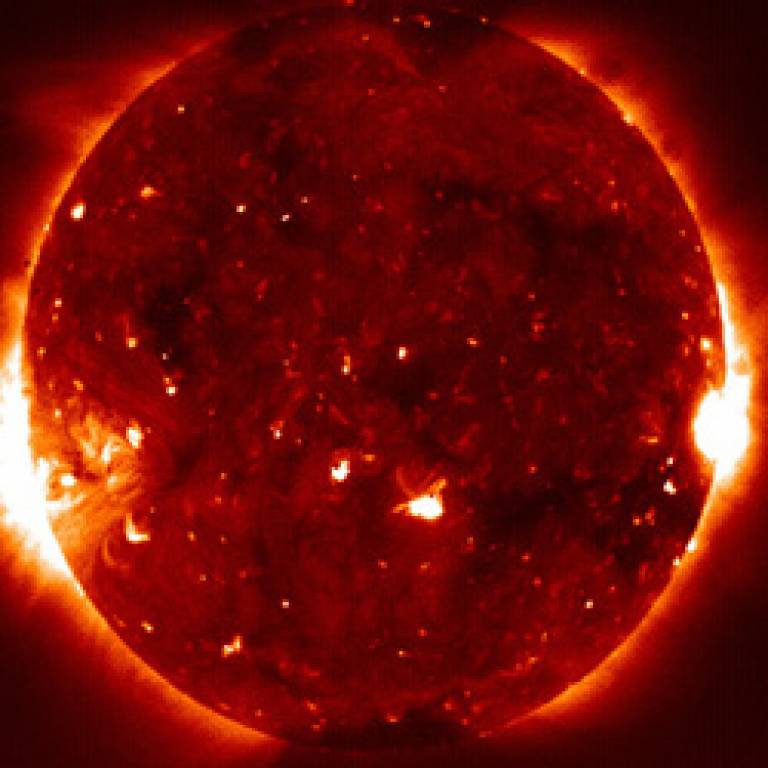 An international research team led by Professor Louise Harra (UCL Mullard Space Science Laboratory) has discovered the source of the solar wind using the UCL-built instrument on board Hinode, the solar satellite observatory.

Professor Harra presented the results to the RAS National Astronomy Meeting in Belfast on 2 April 2008, and the full research paper appears in the 1 April 2008 edition of 'Astrophysical Journal Letters'.

The solar wind consists of electrically charged particles that flow out from the Sun in all directions. Even at their slowest, the particles race along at 200 km per second, taking less than 10 days to travel from the Sun to the Earth. When stronger gusts of the wind run into the magnetic field of the Earth there can be dramatic consequences, from creating beautiful displays of the northern and southern lights (aurorae) to interfering with electronic systems on satellites and sometimes even overloading electrical power grids on the ground.

Since its launch in 2006, scientists have used the Hinode mission to study the Sun in unprecedented detail. One of the instruments on the probe, the UCL-built Extreme Ultraviolet Imaging Spectrometer (EIS), measures the speed at which material flows out from the Sun.

The Sun is a cauldron of hot gas shaped by magnetic fields, which create bright regions of activity on the solar surface. Using EIS, the scientists found that at the edges of these bright regions hot gas spurts out at high speeds. Magnetic fields connect the regions together, even when they are thousands of kilometres apart. When magnetic fields from two regions collide they allow hot gas to escape from the Sun - this material flows out as the solar wind.

The specific source of the stream of particles that make up the solar wind has been a bone of contention for many years among the astronomical community. Professor Harra added: "It is fantastic to finally be able to pinpoint the source of the solar wind - it has been debated for many years and now we have the final piece of the jigsaw. In the future we want to be able to work out how the wind is transported through the solar system".