Links: Why UCL is interested in sponsoring an Academy in Camden 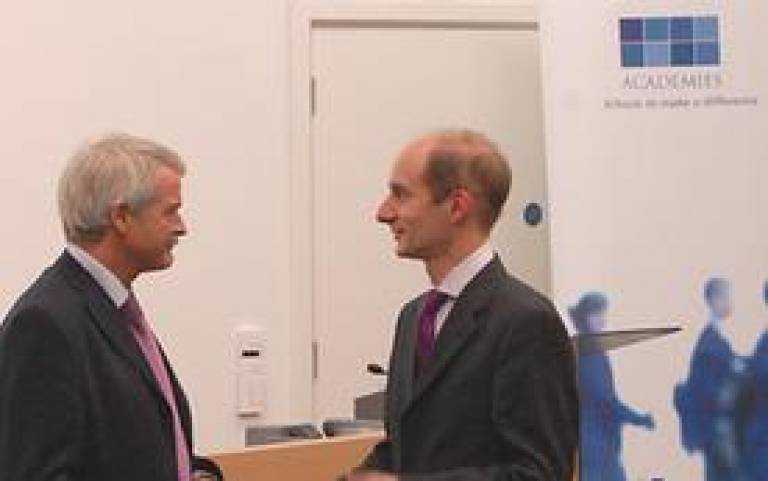 
UCL President and Provost Professor Malcolm Grant yesterday welcomed John Denham, Secretary of State for Innovation, Universities and Skills, and Schools Minister Lord Andrew Adonis to UCL for the launch of a government prospectus setting out ways in which universities can engage with schools to help build academic excellence.

Professor Grant opened the seminar, reiterating his belief that the ambitions of UCL and other Russell Group universities to have a better mix of students from all socioeconomic backgrounds at university level would be best served by more engagement with local schools.

He explained why UCL has proposed to sponsor a new Academy in Camden: "UCL is keen to expand its work with schools in London, and especially in our local borough of Camden. The sponsoring of an Academy is therefore part of our commitment to ever-greater involvement with our local community and also of our commitment to work more with all parts of the education sector in the UK.

"UCL has chosen to become involved in the Academy project because we have first-hand experience of the value of close collaboration with a single institution outside the HE sector. Our Partnership for Excellence with City & Islington Sixth Form College has demonstrated that we can play a valuable role in raising student attainment and aspiration. 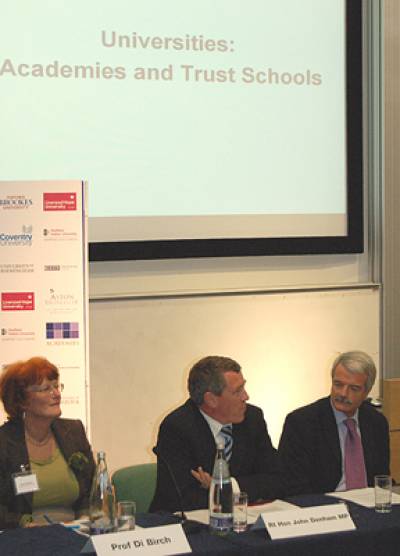 "We also believe that universities have much to learn from closer collaboration with local schools at a policy level - on issues such as widening participation, the impact of admissions policies, and transition between school and university. In addition, at a time when it is recognised that the UK suffers from a shortage of students qualified in mathematics, science and languages, UCL would put these subjects at the heart of the curriculum, drawing on our expertise and resources in these areas to enhance classroom teaching."

Secretary of State John Denham described the school/university partnership models set out in the new publication 'Academies, Trusts and Higher Education: prospectus' as "the search for the very best of our talent". He went on: "As we go into the future, it is increasingly necessary for us to ensure that we don't miss the talents of young people. These partnerships will benefit young people but also our universities."

Mr Denham added that the prospectus built on widening participation systems already taking place across the university sector. Professor Di Birch of Nottingham University and Ken Sloan of the University of Warwick provided two examples of these. They gave presentations of their experiences working with local schools to raise pupils' higher education aspirations - Nottingham through co-sponsorship of an Academy and Warwick through its support of a trust school.

Lord Adonis closed the presentations, highlighting the range of models available through which higher education institutions can foster relations with schools, according to factors such as location and the number of schools supported.

Image 2: Secretary of State John Denham (centre) summarises the principles behind the government's new prospectus on schools and higher education