A design by Professor CJ Lim (UCL Bartlett) is one of two entries to reach the final round of a competition to create a memorial park in China.

Professor Lim has seen off competition from 276 international submissions with his concept for a memorial park in Tangshan, Northern China. The park is intended to commemorate 250,000 people who died in the earthquake of July 1976. This conservative figure means that at least a quarter of the city's inhabitants were lost, making Tangshan one of the most severe earthquakes of the twentieth century in terms of death toll.

Lim's design for the park - which will be twice the size of Regent's Park and situated in the centre of the city - flouts conventional thinking on what constitutes a memorial. There would be no statues or monuments inscribed with names to represent those who died; instead the themes of regeneration, celebration and the relationship between humankind and nature inform his vision.

Lim would not only incorporate the most significant ruins on the site, but also retain the 'ghost' of other buildings that were flattened during the earthquake by covering them with a layer of grass, leaving their outline visible. He would accommodate the new Museum of Earthquake Science in a number of 'exhibition trenches' that would be dug into the earth to expose strata and the geological effects of the earthquake. The trenches would be clad in mosaics made from tiles left over from the area's renowned ceramic industry. 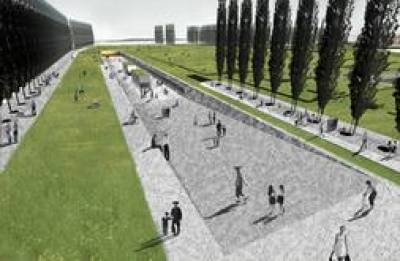 The disused railway tracks that run across the area designated for the park would be filled with flowerbeds that would bloom throughout the year thanks to a microclimate system. This 'river of souls' would serve as a celebration of those who died and an example of beauty in adverse conditions.

Lim has conceived 'courage avenues' of poplar trees, which are indigenous to the area, as a way of drawing on nature itself to protect the city from natural disasters, as well as from noise and air pollution from the adjacent highway.

Professor Lim said: "My design is about not being afraid of nature, but encouraging people to try to understand and interact in harmony with it. I aim to celebrate life rather than death and I believe that abstract representation of courage and loss can have greater emotional and regenerative power than pictorial memorials."

Image 1: Perennially blooming flowers would form the 'river of souls'