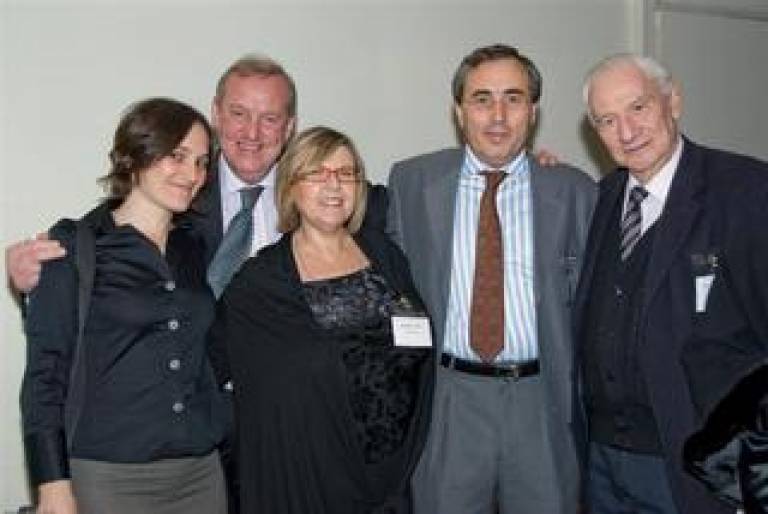 Nearly 100 UCL alumni and guests enjoyed a gala dinner held at the Sheraton City Tower Hotel in Ramat Gan, Israel, on 28 November 2007 to celebrate the first decade of activities of the UCL Israel Alumni Association.

Greetings were also received from Minister for Social Affairs & Services Isaac Herzog, the son of the late President Chaim Herzog (UCL Laws 1941), who was prevented from attending by urgent parliamentary business.

After Justice Bach's remarks on the activities of the association, and his happy memories of his time at UCL, the company heard from Dana Olmert, the first recipient of the Chevening-UCL Israel Alumni-Chaim Herzog Award. Dana expressed her appreciation of the opportunity that had been given to her and the impact her studies at UCL had made on her doctorate.

The association set up the award as one of its first actions, and has so far sent five students to UCL to study for a second degree.

The current award holder is Liran Zitzer, who is reading Public Policy & Administration. He graduated from the Hebrew University after completing the special PPE honours degree programme, and also participated in the Atidim Programme (Cadets for Public Service) that aims to qualify its graduates for key positions in the public sector - he interned at the Ministry of Finance Budget Division within this framework.

Jennifer Janes (UCL Laws 1963), Joint Executive Director of the Association, thanked those who had contributed towards the award and hoped that further donations would enable the association to continue to send students to UCL.

The evening's high point was the address by Dr Paul Ayris, UCL's Director of Library Services and Copyright Officer. Dr Ayris spoke on 'Celebrating 350 Years of the Re-Admission of the Jewish Community into England', and gave a fascinating analysis of Cromwell's motives for permitting the re-admission.

All the speakers made reference to the boycott of Israeli academia, which had recently been proposed and rejected in the UK. UCL's strong opposition to the boycott, under the leadership of UCL President and Provost Professor Malcolm Grant, was emphasised by Dr Ayris.

Everyone then enjoyed a delicious buffet dinner, during which alumni socialized with friends old and new.

To find our more about alumni activity in Israel, use the link at the top of this article.