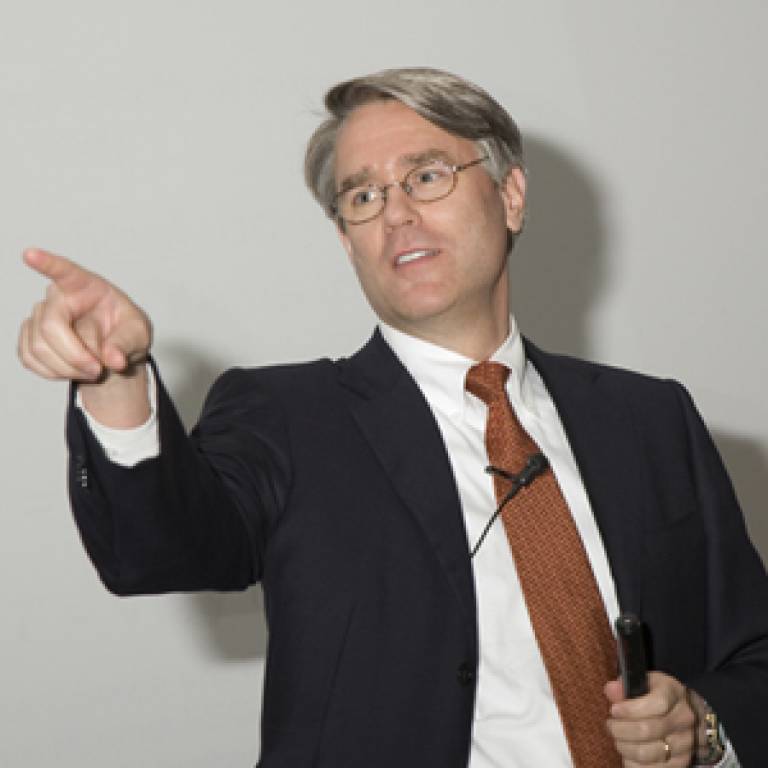 Professor Steve Currall, giving his inaugural lecture as Professor of Management Science & Innovation, outlined the structure of the new department, as well as launching UCL Advances, a venture to bring UCL researchers together with business and investors.


In his explanation of UCL MS&I, Professor Currall defined the term 'Management Science' as "the academic field that conducts theoretical and empirical research on managerial, organisational and operational dynamics in innovation-intensive organisations."

The other part of the department's name, 'Innovation', is also important to an understanding of UCL MS&I's activities. He said: "There are other departments that are akin to ours at, for example, Stanford University and London Business School. At Stanford, the department is called 'Management Science and Engineering' and at London Business School it is called 'Management Science and Operations'. At UCL, we considered 'Management Science and Technology', but decided in favour of 'Innovation' instead because there are many academics at UCL, such as our friends in Social & Historical Sciences, Arts & Humanities, and the Slade School, who are developing brilliant innovations, yet these may not include tangible technologies that can have intellectual property… We wish to be of value to all of UCL's academic units. For that reason, we chose the word 'Innovation'."

Alongside the launch of UCL MS&I, Professor Currall also announced UCL Advances, which replaces the UCL Centre for Enterprise and the Management of Innovation. UCL Advances will lead efforts to reach out to the business and investor communities and build links for knowledge transfer. It will also 'reach in' towards UCL's researchers, providing training and support to help members of the university develop their research innovations into commercial businesses.

Professor Currall's speech, held in the Cruciform Lecture Theatre 1, was unusual for an inaugural lecture, as it was not exclusively about his research. However, he did give details of some pioneering work he conducted in 2006, looking at public perceptions of nanotechnology. In a study entitled 'What drives public acceptance of nanotechnology?', published in 'Nature Nanotechnology', he found that consumers, when considering products using nanotechnology, weigh up potential risks and benefits in relation to one another, and that better informed people are generally more positive about the technology. His conclusion was that transparency is vital when relating risk information about new technologies to the public.

Professor Currall cited his work on perceptions of nanotechnology as an example of the sort of work UCL MS&I will be engaged with. He also listed some other areas where the department is already carrying out research, including social networks among venture capitalists in the semiconductor industry, the organisational structure of academic life science departments and their relations to biotechnology companies, the psychology of creativity and innovation, and project portfolio management in corporate research and development functions.

Image 1: Professor Currall speaking at his inaugural lecture
Image 2: The logo for UCL Advances, which replaces the Centre for Enterprise & the Management of Innovation.