UCL academic Professor Robin Clark has been awarded the prestigious Bakerian Lecture for 2008. 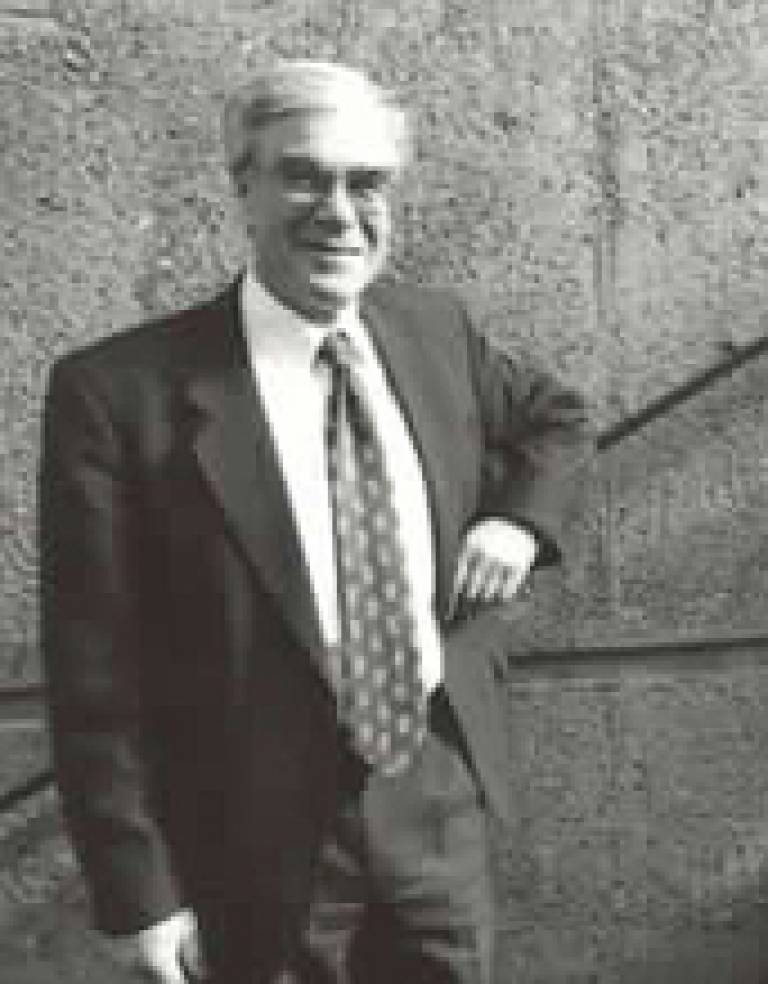 The Bakerian Lecture is the Royal Society's premier lecture in the physical sciences and dates back to 1775. Professor Clark is only the third serving member of UCL staff to have been given the award; two were in chemistry (Sir Christopher Ingold in 1938 and Thomas Graham in 1854) and one in physics (Sir Robert Boyd in 1978).

Born in New Zealand, Professor Clark studied for his bachelors and masters degrees at Canterbury University College in Christchurch, focusing on diffusion-controlled reactions. He then started a PhD at the University of Otago in Dunedin on high pressure chemistry, before coming to UCL Chemistry to develop the chemistry of titanium and vanadium. He has since remained at UCL, albeit having lectured in over 350 other universities and institutions and acted as visiting professor to 13 universities. He served as Dean of Science, Head of Chemistry, and Sir William Ramsay Professor of Chemistry.

With strong research interests in synthesis, structure and property and in physical techniques for structure determination, Professor Clark has long been interested in molecular spectroscopy. In 1969, he obtained key funding to bring the first laser Raman spectrometer to UCL, and his group rapidly developed both the theory and practice of Raman and resonance Raman spectroscopy, techniques which rely on the scattering of light by molecules irradiated with a laser beam. The technique is now widely used in chemistry, yielding specific information on the nature, structure and vibrational frequencies of molecules, and providing fingerprints by which molecules may be identified even in trace amounts.

Most recently Professor Clark and his group have applied a development of the technique, Raman microscopy, to the identification of pigments and dyes of micrometre dimensions on medieval manuscripts, paintings, icons, polychromes, papyri, ceramics, stuccoes, archaeological artefacts and glasses. This interest developed via a chance encounter in the 1990s during which he became aware of the important role that Raman microscopy might play in the arts and heritage sector. He was approached by a library asking him if he could establish whether two pigments on a manuscript were azurite or lapis lazuli, an issue that he was able to resolve by Raman microscopy within half an hour: "I called the library back with the answer - that they were both azurite - and they seemed almost incredulous that this issue could be settled so quickly and definitively.

Knowing exactly what chemicals are used on an object can help to date it and to teach us more about the society in which it was made, explains Professor Clark: "The use of certain minerals and plant dyes in a painting or manuscript may tell us which particular trading routes must have existed when it was made. Synthetic chemicals have known first dates of manufacture, and so their identification on artefacts provides a key to possible dating in the art/archaeology field."

One of the most potent applications of Raman spectroscopy in Professor Clark's heritage work has been in the detection of forgeries. For example, his group has shown that a set of allegedly ancient Egyptian papyri were in fact forgeries from a much later date, because they were illuminated with seven modern synthetic pigments. He has also used the technique to identify the pigments used on examples of both genuine and forged (Grinnell) stamps - early US Hawaiian missionary stamps, genuine examples of which may fetch up to £0.5 million at auction. Such analyses greatly assist philatelists in the expertising of stamps whose authenticity is in doubt.

The staggering value of many genuine artefacts has drawn attention to the problem that it is not obviously in anyone's immediate interest to expose a forgery, certainly not the seller, not the museum or auction house, and not even the buyers, who don't want to pay for investigations when they may not win the bidding.

In other cases the technique can be used positively to strengthen the case that an object may be genuine. Thus the pigments in a disputed Vermeer painting 'Young Woman Seated at the Virginals' were found to be the same as those used in other work by this artist. While this does not amount to authentication, it was important to establish that nothing inconsistent with this attribution could be found. The painting went on to sell at Sotheby's for over £16million.

Gradually (and often following Professor Clark's visits and lectures) major world museums such as New York's Metropolitan Museum of Modern Art, the Getty Museum, the Louvre and the British Museum have acquired in-house Raman spectrometers, largely for use in conservation work. He explains: "Museums and art galleries house countless artefacts the chemical compositions of which may not be known. But if you want to create the best possible conditions for conserving an object, you need to know the precise identities not only of its pigments, dyes and binders, but also the possible degradation products of these chemicals when exposed to light of different wavelengths, to moisture and even to simple juxtaposition with one another."

Perhaps most importantly, Raman spectroscopy yields a new way of understanding an artefact and appreciating it for its own sake: "When I go to an art gallery, I always think how I'd like to see the minerals, pigments and dyes that make up a painting listed alongside its title, artist and origin. People should be made aware that paintings are made up of chemicals, and that painters over the ages had great skill with and knowledge of these chemicals and their reactivities - this is part of their work of art."

To find out more about the Bakerian lecture and Professor Clark, use the links at the bottom of the article.