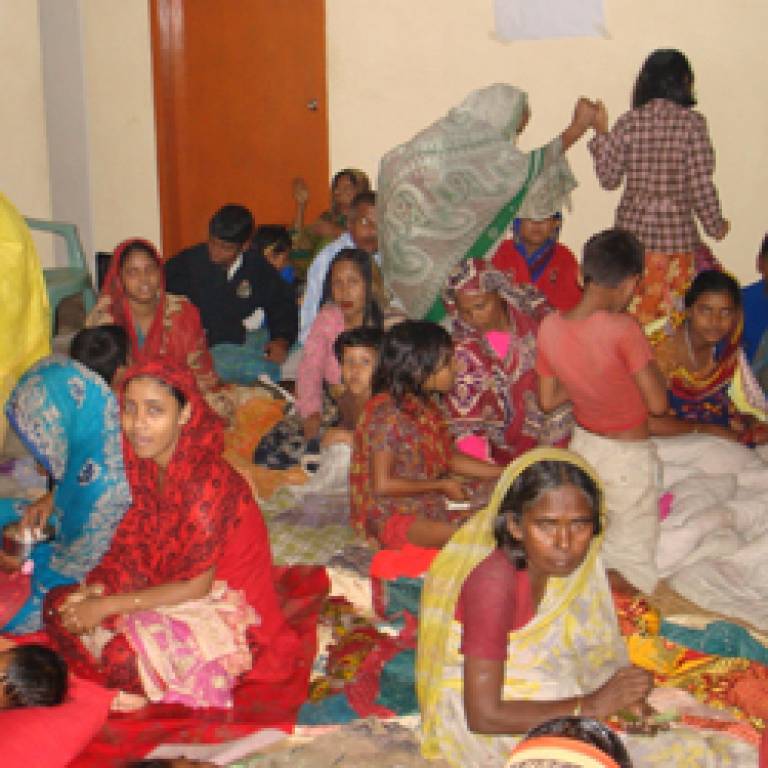 Sidr was the most powerful cyclone to affect Bangladesh since a storm of similar strength in 1991 killed 138,000 people. Sidr's death toll was far less than that of the 1991 cyclone due to improved storm warnings and to Bangladesh now having a much-improved cyclone disaster-prevention programme. The latter includes procedures for mass evacuations and the construction of concrete cyclone shelters for use by the most vulnerable communities.

The UCL tropical storm tracker provides a range of user-friendly warning information, including email alerts, for tropical storms worldwide. The UCL warnings of Sidr's landfall time, intensity and location were widely used by Bangladeshi humanitarian and government organisations during the 48 hours prior to impact in deciding when to issue evacuations and to open cyclone shelters.

Elish Majumber, Central Manager for the HEED (Health, Education, Economic, Development) Bangladesh's Disaster Management Programme, said: "The UCL tropical storm tracker played a crucial role the day before Sidr struck, in alerting our volunteers in the Barguna and Patuakhali districts in southern Bangladesh to mobilise people to get into the cyclone shelters in time. Based on media warnings, our staff had previously decided not to mobilise people due to the risk of giving false information, but this decision was changed by the UCL warning. It proved accurate and helped to save many lives."

Tasdiq Ahmed, ICT Specialist of the Bangladesh Ministry of Food & Disaster Management's Comprehensive Disaster Management Programme (CDMP), said: "The CDMP advises and works for the Bangladesh government on disaster-risk reduction. The forecasts issued by TSR/UCL and our own Met Department at our Disaster Management Information Centre were central to us advising the government to issue an emergency mobilisation call to all coastal district administrations and volunteers to open cyclone shelters and evacuate coastal areas. This action undoubtedly saved thousands of lives."

Kieron Crawley, Country Director for Concern Worldwide Bangladesh, said: "The TSR/UCL warnings gave Concern - the international humanitarian organisation - valuable and accurate information when deciding which local partners to contact to order evacuations to the safety of shelters and high ground."

TSR has worked in partnership with Reuters AlertNet, the global humanitarian news portal, since 2004. The portal disseminates TSR's real-time alerts for all active tropical storm systems (hurricanes, typhoons and cyclones) threatening landfall anywhere in the world. Timothy Large, Deputy Editor of Reuters AlertNet, said: "TSR's warning maps and information for cyclone Sidr were critical to Reuters AlertNet alerting humanitarians in Bangladesh and journalists around the world to the impending disaster, up to 36 hours in advance. As a result local emergency-relief charities were able to plan their emergency response better, thus helping to reduce loss of life, suffering and hardship."

Earlier this year, the Benfield UCL Hazard Research Centre (BUHRC) marked its tenth anniversary. UCL President and Provost Professor Malcolm Grant spoke of the centre as exemplifying two of the themes that underpin UCL's work: relevance and partnership. First, the centre's rapid application of new research and best practice clearly had a significant impact on people around the world, not least the millions whose lives are in regular jeopardy from the threats posed by natural hazards. Second, Benfield's insights into the concerns and needs of the corporate sector informed the development of the centre's research and education programmes.

Professor Saunders commented: "It is particularly pleasing to have researched and developed a product which has helped to save many lives. I find this more satisfying and rewarding even than publishing first author papers in 'Nature'. This UCL success would not have happened without the contributions and efforts of Frank Roberts, Dr Peter Yuen and Dr Adam Lea, all of UCL Space & Climate Physics and Benfield UCL Hazard Research Centre."

To find out more about the tropical-storm tracker, or the organisations which benefited from its warnings, use the links at the top of this article.

First image: People taking refuge inside one of the concrete shelters which were used for the first time as a result of the UCL warnings (photo courtesy Richard Phillips, HEED Bangladesh)

Third image: A warning map issued by the UCL/TSR tropical storm tracker at 18.00GMT on 14 November, a day before Sidr struck Bangladesh. The map shows Sidr's expected track, intensity and landfall location. The cyclone was forecast to strike western Bangladesh with one-minute sustained windspeeds of more than 210 km/h